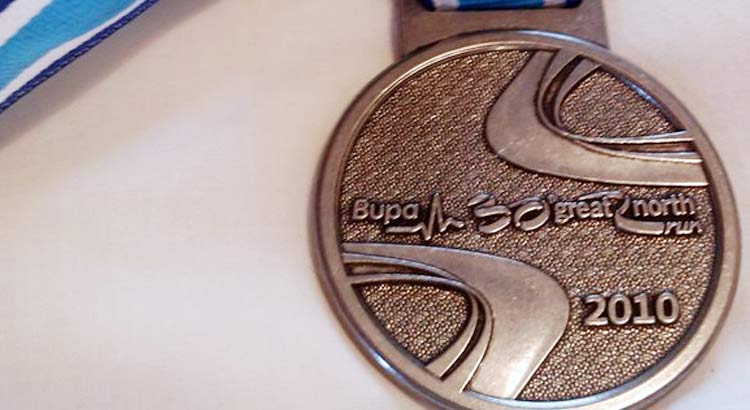 This was the big one, nothing to do with Roller coasters in Blackpool but one of the largest half marathons in the world – Newcastle to South Shields. I had completed a half marathon only once before 12 months ago on the same territory, uninjured and clocking in a respectable 1 hr 46 mins and 26 seconds. This year due to injury I set myself a sub 2hr with a “very nice to have” of 1.50.

I drove up to a very busy Newcastle with my friend Becky who was doing this for the first time, both supporting “Kidney Research” vests to raise money for people like Becky’s little boy who has one working Kidney.

Sunny Newcastle was buzzing when we arrived mid Saturday afternoon. Despite the hotel being a little tired and not in the nicest of areas, the staff were very friendly and we opted for the “pasta buffet” for dinner to save queuing for a restaurant in town. Exploring Newcastle was fun in itself, with a Bupa event going on at Gateshead Quays. The city is lovely, feeling very Mediterranean, and I even found the nightclub that kept us awake all night last year.

Pasta and apple crumble kept those carbs topped up. I was nervous, more about my many injuries than anything, crushed bike leg and tendinitis was not a good start for a half marathon, along with dodgy tummy cramps and conversations revolving around “poo’s” and whether nipples will show through our Kidney Research vests.

So the big day arrived. Bags packed, gear on, old clothes on, rain included for free. Yes it was raining, Harriet* and dogs, as there were lots of poodles outside.

The Metro ran on time, Newcastle was running on full, nothing but runners insight, nerves got the better of me as I headed for my first of many portoloo stops. Well actually I lie here as it was my only portoloo stop as I refused to queue, a girl who has no dignity, so behind a bush I went with bog roll and hand gel in toe.

At 10.20 it was emotionally time to say goodbye to my friend Becky as I gave her a big hug I couldn’t get my words out to say “good luck” I just nodded and almost flooded with tears. Don’t ask why I was just emotional, as I departed for orange and Becky departed for Vodaphone.

There is something beautiful about working so hard that you are reduced to silence next to your friends. Some friendships never get to the level where silence is comfortable, let alone productive or healing. Some friends will never understand the unspoken. – Kristin Armstrong

It’s an incredible feeling, the energy of 55 000 people crammed into a dual carriage way in a northern english city. Watching the excitement on people’s faces, the nerves, the pure adrenaline surrounding me, for this, the 30th Bupa Great North Run.

The gun went off and I slowly jogged to the start – If a clock had legs, time would run out, crossing around 4 minutes and 30 seconds only just spotting Ant or Dec off I bounded, today I was a kangaroo amidst car headlights, a big happy kangaroo that would not get run over. Through the singing tunnels, and down towards the river, I felt alive, my energy was like a water pipe overflowing. Crossing the Tyne Bridge I felt just like I did last year, bursting with energy and adrenaline, it felt like someone has put a lightbulb up my bum, I was alight. I could feel my injuries setting in after the first water stop at 5km but I was not going to give in.

Next stop: Power-aid, do not stop at the red lights, the only time one can ignore the green cross code just carry on, you are doing this for Kidney Research, and yourself, you will not give up you will push on through just like the thousands of other runners. Run Girl run. I felt strong.

Mind is everything: muscle–pieces of rubber. All that I am, I am because of my mind. – Paavo Nurmi

10km in, that’s about 6 miles done, I waved enthusiastically at the Kidney Research chearing bus, as I glided past. I was feeling comfortable by this time and overtaking other fellow Kidney Research vests.

How do you explain running with this amount of people to someone who hasn’t done this before? Drizzle was setting in by now but that was fine, a contradiction in itself, as I gave thought to my friend Becky who would be about half an hour behind me by now.

The 10 mile boost zone approached as I remember well from the previous year which is when I began to slow. This year I felt strong and kept up pace despite my quads feeling like sandpaper, they would not get the better of me as I strode on, refusing to take the free jelly babies but taking on my pocketed gel instead. An instant hit of energy enabled me to power up that hill beyond the 11 mile mark and towards the 12.

The body does not want you to do this. As you run, it tells you to stop but the mind must be strong. You always go too far for your body. You must handle the pain with strategy… It is not age; it is not diet. It is the will to succeed. – Jacqueline Gareau

This year water at 11.5 miles was most welcome as the last drink stop gave indication it was all downhill from here. Something I need to improve upon was my downhill running but as the crowd was gathering pace too so did I.

The home straight, 12 miles, the crowd thickening, supporters shouted out my name “Go Helen” “Well done Helen” “Keep it up Helen” giving me extra power to push. I had no concept of time, at the 20km mark I heard two guys talk about 1.40, could I really beat last years’ time, could I get a sub 1.45, could I push that little bit harder? I could, and I did as I overtook some of those who were giving in at 20km and walking. Walking is not in my running vocabulary mate.

I poweraided further to that 400 metre mark, that 200 metre mark, 100 metres and I saw the clock, the clock never lies…. so why did it say 1.45 something? Had I just run a half marathon in about 1.42 minutes with two injuries and still felt on top of the world?

God determines how fast you’re going to run; you can only determine how quickly you achieve it

Begin at the beginning and go on till you come to the end; then stop

I headed to the Kidney Research tent –finished runners few and far between at this stage and got a big cheer from the guys there including a big hug from Stephen; one of the managers who recognised me. My diet then consisted of biscuits, jelly babies, cereal bars and cups of tea. The rain set in but I was not going to runoff, as I stood freezing my feet off under the PQ banner waiting for my lovely friend Becky to come in just as the red arrows flew passed.

Becky emerged from the fog and rain, and we gave each other a massive hug our grins spread wider than that the mouth of the Tyne, we had both achieved, we had done this, a year of pain, of winging of moaning of injury after injury and we were here we had run a marathon between us in under4 hours and 15 minutes.

I felt elevated and proud of myself and more so my friend Becky who two years ago was 8 months pregnant with her second, and now she is running half marathons in nearly 2 hrs and 30 minutes, I find that more inspiring than anything. Thank you world for letting us run and letting us run happy.

Thank you to everyone who supported us on this journey to raise lots of money for Kidney Research, it means a lot to us and to the many people out there with kidney disease. We raised nearly £450. I thank you all.

*Harriet is my cat