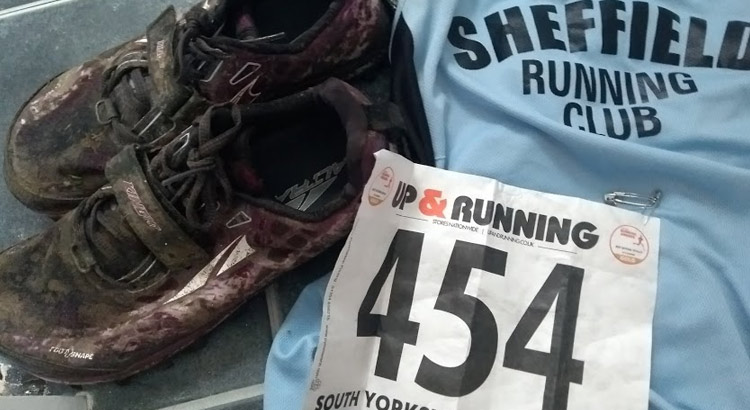 The first cross country of the season was upon us already, local, very local, hilly, quite hilly, so why not? Just a week before my big event in Turkey the Cappadocia Ultra Trail I was to make sure I would take it easy.

I ran up to the park around 4 miles away, a misty drizzly day if there ever was one. I nearly ran for Valley Hill as I got there, no sign of the Sheffield RC guys so threatened to put on a Valley Hill top, similar colours anyway.

Eventually, a couple of us saw the half erected tent and flag (but no pole) which ended up being wrapped around the front of the tent instead. I dumped my bag in the tent area and got ready, stripping off to vest and shorts. Brrrrrr… the typical cross country then.

The start was about two strides away from the pitched tent so it was a matter of dashing out of the tent at one minute to midday and huddling in the already established crowd where the South Yorkshire girls were ready for off, but not before someone decided to spit on me, not a problem and she did apologise. Then we were off.

I placed myself midpack and sat there comfortably for the first 500 metres or so. It took a sharp turn and then a downhill ‘fell like’ descent where a few guys and girls went straight down on their backsides. I danced down merrily overtaking those that were most used to the road.

A muddy incline caught out a few runners, I had decided not to wear my spikes as quite frankly they are too narrow and last time I did a cross country in them I damaged the top of my foot so I went for my Altra Kings, with large lugs and they stood the mud perfectly, I didn’t particularly think they hindered me at all. So these will be my go-to shoes for further cross countries.

A nice rolling descent on slippy grass led onto the hill on the first lap – 1 small and 2 large laps for the ladies. Of course there is all the controversy whether cross country should be equal and for me I would love to do the same distance as the guys given that I don’t warm up until the last lap but I also understand that it may put some people off having to do 5 6 or 7 miles of cross country. So it was only about 3.5 miles the ladies race (including the VET men above 65 which comes into its own in the last lap)

So around the first lap and no damage done, I got a few of the girls who had gone out too fast and was now familiar with the downhill sections, the muddy sections and the ascents ready to tackle the next lap – easy. I was quite enjoying this.

The next lap was uneventful but I particularly enjoyed a very very very tiny bit of woodland before heading down to the bottom of the park for a quick levelling off before climbing right back up the hill around a tree and rejoining the medium lap course. Once again I managed to take a few people on the hill and soon found myself on the third lap.

By the third lap there was a Totley girl in front of me who managed a really good arse over **** on the downhill section, a spectacular slide if there ever was one, after asking if she was ok, I moved passed her and powered on to chase club members Deb (who is always too fast for me) and Mike Quinn who was just in front of me. I would proceed to chase the two of them for the rest of the lap, Deb in the lead, Mike in the middle and me just behind. I was not fast enough to catch either of them though apparently myself and Mike came in at exactly the same time in the end (though Mike was so keen he was about to do another lap)

A most enjoyable course with some good undulations, some decent mud and a good solid 3.5 miles ish of cross country fun.