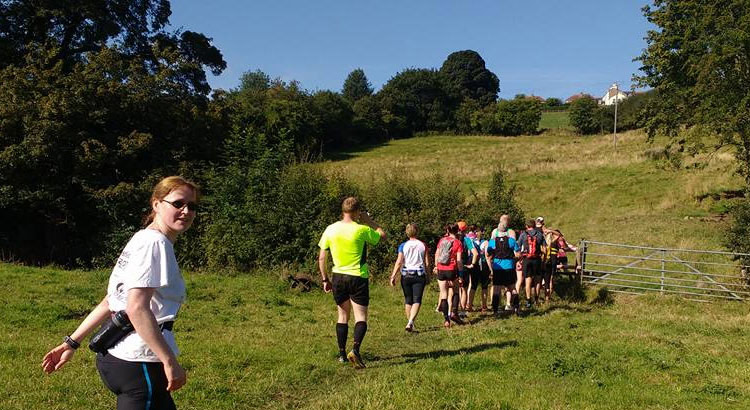 Belper Rugby Rover – what is it? where is it? what sport does it entail? Well reading the title you would think it would be in Belper, it would be a Rugby match and it would be sponsored by Rover. Oh how wrong you are. It is a 30km trail run or walk around the lovely countryside (I said county not country) of Derbyshire.

So what better way to spend a Sunday morning than jumping over stiles, squeezing through little narrow gaps, trying to avoid the cows and splatting the cow pat?

Its only one lap and the farmers have removed most of the bulls! – Organiser of the Belper Rugby Rover – 30km

It was a 9.30am start just down the road from the rugby club HQ. There was a good turn out for this event, mighty impressed. Some of the runners supported all the trail gear – Appearance can be deceiving you know. And we were off..

A surge of legs sped past me as we had to do a little run around a mini roundable on concrete to begin with – I wasn’t sure why to begin with but apparently its to let the faster runners get ahead so there is less congestion – a fantastic idea although people seemed to be going way to fast for this small stretch, whizzing past me as I just grinned plodded and waved at my friend Becky who had run to the event to watch me start. Perhaps I should have put in more speed here?

Within 5 minutes we had crossed a bridge and were on the real footpaths. This was more like it, squelch and splat as we all sped through the puddles and mud through flat fields, squeezing through the little stone gaps which even Victoria Beckham would have difficulty getting through. Apparently there is no law to the width of these, is that why some people refer them to cowboy gates?

Congestion within the first two miles was due to not only the runners but also the cows getting in the way as we scrambled up the edge of steep fields. By this time however I was begining to find my groove and over take people – see ya at the finish line!

I don’t run away from a challenge because I am afraid. Instead, I run toward it because the only way to escape fear is to trample it beneath your feet. – Nadia Comaneci

The route took us up some steep ascents up grassy fields. The descents were a mixture of trail, track and fields. I took advantage of the descents to catch my breath and was mighty proud of my techniques when I actually began to over take people on the downhill – this never happens to me – what is happening? I am learning to run downhill – wheeeeeeeee..

Big red arrows everywhere marked out the route. As the organiser at the start commented – if you miss the arrows the options is down the road. Faultless – absolutely arrowtastic. The checkpoints deserve a check, all marshals really friendly, with ample water and jelly babies, what more would you want for your Sunday dinner – really? Yorkshire jelly babies and water gravy with a spud of cow dung and some peas please?

The sun was beating down hard and fast, even in the woods the heat was intense. I was producing enough sweat to fill the local reservoir – twice over, more sticky than sticky toffee pudding. That will be for pudding then.

Around half way I passed a dog doing the run pulling his owner up the hills. I then did what every man and his dog can do, I went for a wee. I had to go for a wee, so just after a stile I jumped to one side glanced around and wee weed into a weed. I had to go, I just had to go. Well I had seen plenty of men stop and wee wee so why can’t us ladies? Slash. Put on your big girl panties and deal with it. Slash – such a good word.

Human urine is both nutrient-rich and an effective tooth whitener – Christopher McDougall, Born to Run

Speaking of ladies, at the third checkpoint I got called a lady – ‘well done lady you are looking strong’ ‘keep it going lady’. I have more in common with Miranda Hart than you think. I am a ladeeeeyyyyy. Such fun, such fun. Bear with whilst I take some jelly babies and a cup of water – bear with, bear with.

10 miles in and I was feeling good, 10 miles isn’t that far when in one day 6 weeks ago I did 40, so I reminded myself I only had 8 to go and from the elevation it looked like the second half was more downhill – oh how wrong was I? First jumping over more stiles in 100m than were on the 100m hurdles at the London Games the other week, jump run jump run jump run and squeeze through the stone wall gaps, and squeeze and jump and run and run and run. Then through pretty cow pat and onto pretty woodland – tree stump ahead, and another and another and another. I felt like I was dancing though, keeping up with a couple in front of me for a couple of miles through the woodland.

Try the meditation of the trail, just walk along looking at the trail at your feet and don’t look about and just fall into a trance as the ground zips by. Trails are like that: you’re floating along in a Shakespearean Arden paradise and expect to see nymphs and fluteboys, then suddenly you’re struggling in a hot broiling sun of hell in dust and nettles and poison oak… just like life. – Christopher McDougall, Born to Run

Out we emerged around mile 14 to the last checkpoint. I took a handful of jelly babies and cup of water and was pleased to be told that we only had about 3 miles left of which most was downhill through fields and across flat tracks to the finish.

Even though I had taken some jelly babies once I had crossed the fields and got onto the flat tracks I felt myself bonking, what was happening here, had I not taken enough jelly babies? I had consumed gels too. I know my body and I can go dizzy just standing never mind running, so I reached for my jelly beans and got a couple of them down me before I bonked. Within a few minutes these had set in and I was off again getting into my stride and over taking some of the what I would call faster runners.

Back on the flat paths the fields, tree stumps and blades of grass began to look a little familiar – oh yes we came this way on the way out – not too far to go then, as I overtook one guy and then another and then another. My stride felt strong and my head all in the right place. I found myself running on my own for the last mile and feeling really good. I had a big grin on my face as I reached the main road and turned into the Rugby Club. One guy was what I would call jogging down and so I put in a big spurt of energy to speed down the pathway round the corner and to the finish with cheers going on around me.

There was no clock, it was all done in a great old fashioned way, pencil and paper – forget the chips this was real rock and roll – the chips were in the bar along with the burgers and beer. A fantastilocious t-shirt if people had got their acts together and entered before a certain date – that include me.

I don’t want to be friends with someone who jogs! Go and have a burger!! – Miranda Hart

My only mistake was that I thought it was 18 miles not 30km, and 30km is more than 18 miles, so although I had my beeps set at 1 mile intervals I did get a bit disorientated towards the end thinking it was nearer than it really was. Live and learn. That’s why my Garmin came in at 18.4 and not 18 miles – doh! Stupid!

What a fantastic event, open to runners and walkers. A brilliantastic route if you like a great 30km off road – challenging yes with around 2300ft of climb. The marshals and checkpoints were spot on – lots of them marshaled with people who were genuinely helpful and encouraging. This is one of few off road events like this that has been so well marked. Just almost perfect. Don’t expect a pb in fact ditch the watch – just use it as a marker for distance not time. The only thing that I was not too keen on was the roundabout at the start but everything else made up for a brilliant Sunday morning run.