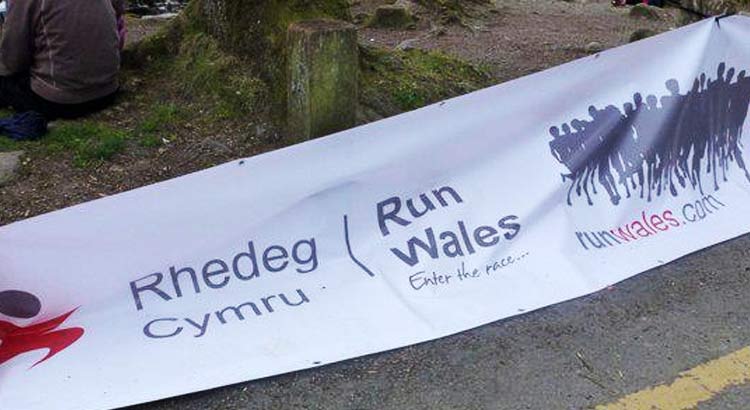 This was no April Fools – well it couldn’t be anyway as this particular race started at midday, however you would have been a fool to participate in it and what fool would go all the way to Snowdonia for a half marathon anyway? Really!

Meanwhile my best friend has already run her 10km race in Derby whilst I was still pacing the streets of Betws-y-coed in anticipation of my first half marathon in nearly 11 months. I had little aims for this really, a sub 1.45 would be nice, a sub 1.40 would be great and a sub 1.39.20 (official PB) would have been the cherry on the welsh cake. However I had been doing much longer distances lately and really slowed it down so I really wasn’t holding my breath for anything. Anyway who would want to hold their breath in this gorgeous mountain air anyway?

We were escorted up the hill just so we would get the extra 0.1 mile in to make it 13.1 miles (lets not have a repeat of Edinburgh where it was 13.4 miles thank you very much). I placed myself mid crowd not sure of the speed of these Welsh lot, and the gun went off, down the little hill we pounded, past the finish line – see you in about an hour and three quarters Mr Finish line. Once down the hill the slower runners backed off and the faster runners just got faster and me I just got my own little pace in my own little world.

Either lead, follow or get out of the way! – Author Unknown

The first 6 miles had been described as “reasonably flat and quite fast” – a gentle roll of up and down with lots of “ARAF” painted in white – the opposite of what we wanted to do a.k.a. SLOW. The sun was beating down as I overtook a couple of guys at the 2 mile marker and got chatting to another one about water stops (or lack of them) at the 3 mile marker. Although I was hot I was feeling good, relaxed and happy. ARAF to you mate too.

I was supporting nothing more than trainers, socks, “Sheffield Running Club” vest, shorts and underwear as well as a couple of energy gels for later. No watch, no phone, just me, the run and the sun. Bliss on earth and peace to all Welsh mountains.

5 miles in, a most thankful water intake appeared as the sun was beating down and I was ready for a mouthful of Welsh water. They even had welsh cakes but I was not ultra-ing today so no welsh cakes on the run for me, instead I opened up my energy gel and attempted to take in some of the thick guey stuff which actually made me feel rather ill. Too thick, I won’t be using those again. Dumped. Bye bye gel time to run on and ignore the rubbish gel.

Then came the dreaded hill that we had been warned about some 250 metre climb of hill, hill and more hill, hillish hill of around 3 hilly miles. It went up, and up and up and round and up, and then a bit of flat then a bit more up hill. Did I say it went up? Now Sheffield is renound for its hills and I have indeed ran up Hagg Hill a few times in the past near me, and I live on one of the steepest roads in Sheffield however 3 miles of up hill was indeed hard. So hard in fact that I was the only one running up it. Remember the man on top of the mountain didn’t fall there.

[headline h=”1″]You can never run a hill too hard, you will collapse before hurting it. – Author Unknwon

I could not believe that everyone was walking up it, that everyone around me were blokes and that I was ticking them off slowly but surely one by one gaining 3 places, 6 places, 9 places, loosing 1 place as one guy attempted a run walk technique, gaining another 2 places as that particular guy failed to catch me, as I just panted up one foot after another and pushed on and on and on, you will not see a Sheffield Lass fail this hill, you will not, do you hear me? I will run every yard of this half marathon I will. I will show you I am a tough Yorkshire lass for a reason. Please say zooommm I need the sound effects. Ok lying slightly; I may not be the fastest on this planet but I can run up the hills and I was still feeling remarkably strong considering the hill. Did I say there was a hill?

The top gave way to some stunning views of the Welsh countryside, as we were now driving through our tired legs down some gorgeous country lanes, with supporters encouraging me with lovely Welsh shout outs of “Go Sheffield” – aww bless.

Then came a more rewarding down hill section as I let my body float to the bottom to meet a picturesque lake, so gorgeous in its setting that one of the stewards shouted “keep going you are doing great and enjoy the views” – I replied back “thank you the views are stunning” before pounding on feeling alive and well oblivious to time or life or anything. Just having the ability to reply to people meant I must be feeling ok, no little voice inside of me told me to quit today as I kept on running.

I was running my own race, runners in front, runners behind but just me and the countryside really and the supporters along the way and a few hills to make me feel at home. This is how it’s meant to be. Running free.

At the 9 mile mark another water intake was again a thankful sight and time for another gel as I found my energy levels dropping slightly, this time an isotonic one much better much better, slurp slurp slurp given I had ditched my other one way back. Just in time for another hill or hillier for another 1.5 miles, keep going, keep going. The hill will not defeat you, yet I managed to defeat another 6 blokes as they were walking up the hill and me, well I just continued running, albait slow but it was a run and I was knocking them off left right and centre and up.

Over the hill, someone shouted out “ohh look a Sheffield runner” – as I bounded on by, waving at them. Thanks for the shout out.

I have never been a great down hill runner and right from around mile 2 no one had yet over taken me, suddenly someone came past me, I shouted “well done mate keep going” to them – to find out they were a female (40). The girl really helped me keep going on that last 3 mile stretch as I attempted to chase her to the finish.

The last couple of miles were indeed very much a ‘downhiller’ with a few undulating up’iers however it was tough, as some of the bits were so steep downhill that it was impossible to run down them fast. Do not ever estimate the difficulty of downhill running. The only thing I caught around 11 miles was Stitch, it must have been a female thing as chatting to the other girl afterwards she too got stitch around the same time.

[headline h=”1″]I believe in the runner’s high, and I believe that those who are passionate about running are the ones who experience it to the fullest degree possible. To me, the runner’s high is a sensational reaction to a great run! It’s an exhilarating feeling of satisfaction and achievement. It’s like being on top of the world, and truthfully.. there’s nothing else quite like it!
– Sasha Azevedo

Both myself and the girl infront of me caught up a few of the struggling guys and ploughed on. Unfortantly after the 12 mile post I made a big mistake and peaked too early as I thought I saw the building of the finish but alas no and had sped up too soon, seeping a lot of my energy. I decided to hang back and catch my breath before giving it another spurt although unable to catch the girl infront of me I kept her in my sight at all times. The 13 mile marker was a welcome sight and my cue to speed up as the crowd below got thicker and my legs started spinning faster and faster to cross the finish line in a clock time of 137.40, my fastest time yet – how the hill did I do that?

Speaking to the girl who just beat me afterwards, she was amazed I had PB’ed on that route. I was amazed I had got sub 145 never mind sub 140 or a PB. It’s amazing what you can do when you don’t even think about it and just run. This is why I run.

[headline h=”1″]When people ask me why I run, I tell them, there’s not really a reason, it’s just the adrenalin when you start, and the feeling when you cross that finish line, and know that you are a winner no matter what place you got.
– Courtney Parsons