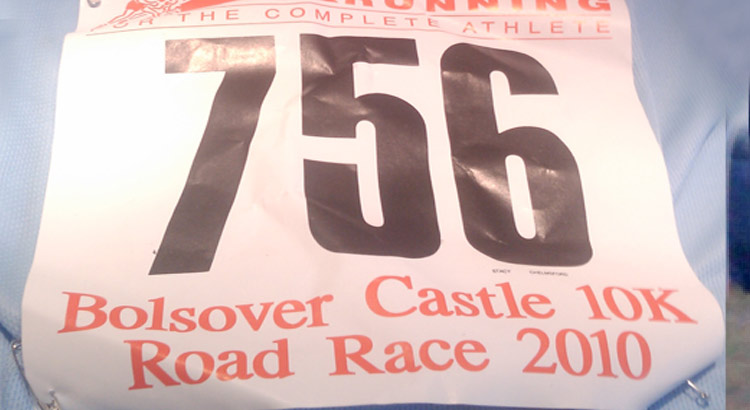 I had not prepared my mind at all, mind over race, race over mind, but that was fine I had no expectations for this race it was just a race to set me up for the year to come.

The race had been postponed from 19 December 2010 due to ice. It was a perfect day for running, a little overcast, not icy, chilly but that was fine.

I prepared myself for the race by doing an hours ironing before I set off. It’s only 40 minutes from Sheffield so a nice distance. Like.

It was fairly busy when I arrived, plenty of Sheffield RC guys there plus the Don Valley Track people so nice to see familiar faces. I was supporting my Sheffield RC vest, the first time I had ever run with a club vest, whoop I feel like a proper runner for the first time in my 3 year running career. Double Whoop.

I waited for my friend to join me but got told to get off the castle grounds as the start line was a good half km away – pah. I was near the back that was fine I did a bit of moving towards the front but didn’t get very far that was fine as I reminded myself that a, it was just a run to get a time for the year to come and b, to not count people as I pass them, its rude, and c, as I found out later to say hi to people as I pass them. It’s rude not to.

Running is like life, it’s a long journey, but well worth it

The gun went off and off we went, it took about 20 seconds to cross the start line as it was on the pavement, beep beep beep beep as shoes ran over the chip mat and off I went being naughty running round the stewards so I could pass the runners who were pacing it a little slower than myself. I saw a couple of Sheffield RC tops and did mean to say hi but I was running on the outer bit of the road and didn’t have time.

I felt very strong for the first couple of km, and caught up Cat from Sheffield RC, and we ran a bit together though Cat is extremely strong on the hills and strode well in front of me on the upwards though I managed to do the same on the downhills, we seemed to be playing at overtaking each other, a great pacemaker though – thanks Cat!

The run took us out onto country lanes, it was lovely, peaceful apart from these mad trot trotters of trainers pounding these lanes on this gorgeous Sunday morning in January.

Around 3-4km I got negative thoughts, I was shattered, I can do this, I can’t do this, why do I do this, to hell with it there is a downhill in front stride in front, look at that guy he is 6ft tall and you, yes you little you are going to stride past him with all your strength – YES!

I passed a couple of other familiar faces and strode on, water just after the 6km was a pleasing mouth watering gesture just before the hill. It was an OK hill as hills go, I was happy with the hill, it felt good. The following KM however was a struggle, mentally and physically as I felt my leg twinge, this showed on my splits too.

Around 8km we arrived back in urban land, as houses rose from the green fields and a main road supporting a 50mph sign told us to slow down to 30mph. That’s OK I really don’t need to slow down.

There is no time to think about how much I hurt; there is only time to run – Ben Logsdon

At this stage I was chasing a policeman but I over took him and towards the end he was chasing me, what a chase. Was I speeding? 9.5ish km passed and of of the stewards shouted 43 minutes – oh F. run girl run. Was it downhill from here? Was it? I ran 400m to go shouted another, dig deeper shouted another and into the grounds of the castle. I had visions of running through the castle so the finish was a little too sharp as I saw the clock around 45.15 swoop I actually clocked a chip time of 44.32 and my friend clocked an amazing time of 1.04.00 – talk about perfect!