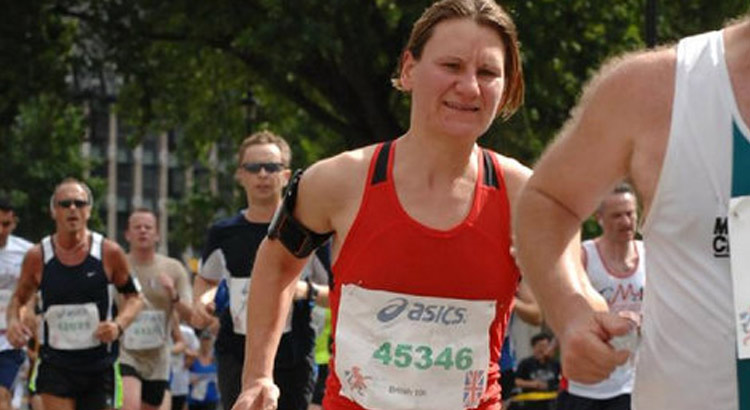 Yet on one of the hottest weekends of the year I descend down to the big smoke for the Asics British 10km run in central London. I’ve never ran the pavements of London before only the Hyde Parks of London, so this would be exciting for me despite the heat.

Due to nerves I was up bright and early and left New Cross Gate around 7am finding a few other runners making their way to central London en route with me. By the time I reached good olde Nelson and the roaring lions there were more and more runners piling into the centre. Baggage dropage was nice and simple, find your bib number, and drop your bag, bingo. Toilets were clean only because I went before most people. Crowds were multiple as I hooked up with two ex work colleages (or Tri people as they had elastic laces) from days gone Beeb.

The big winge of this race was that it was not filtered. No waves which meant we weren’t going to get wet, however it did start to spit around half past nine. But because there were no waves the sun then came out and so did the other 24997 people, including those in little frilly skirts, Scooby Doo, Morph and Roadrunner.

We managed to get nearish the front so we thought but didn’t cross the start line until… well who knows as I couldn’t even see a clock. Asics get your ask together, please!

It was like Piccadilly circus going down Green Park towards Trafalgar Square, someone must have got the landmarks mixed up, along with those who thought they were runners but gave up 300 metres in as I heard someone shout to a now walker “you’ve only gone 300 metres”. Some 2.5k later I had managed to dodge ball 3692 runners, tripped over 56 times, elbowed 78 people and spat on 23 others. Lovely.

As I reached embankment either people were giving up or there was just more space. There was water at 2.5k but I didn’t take any, continuing towards Tower Bridge I got a good pace and zoned out. I was not going flat out despite the flat route as I did not want to injure myself too much, I just wanted to go for a little injury this time around. By the time I had reached the 3k mark the fastest Male was approaching on the other side, as we all clapped; ohh it makes me feel so slow.

Flat and flat and more flat and oohh a little slope (a slope guys not a hill come on….) under Blackfriers…oggie oggie oggie, naa sorry but the Great North Run still beats that.

…and back as I take water at the 5km mark – guys please undo the tops for us on those bottles, please try and top it next time around.

Hot hot hot, Big Ben in sight, leaving St Paul’s behind along with Paula, Maureen, Mavis and Jemima Puddleduck I suddenly found myself flocked by boys (or men?) where’s all the girls, help me girls come on…. I run like a girl…. catch me if you can.

Approaching Westminster bridge I was warned about the hill…but I was confused, a hill? a hill on a bridge? a slope, yes but a hill? Nope sorry I could see no hill. Ok onwards and erm straight-wards as I take water and told another 2k, so shout out “shit” really loudly but no one reply’s as they are stuck to their earphones or just unfriendly, I do not know but I did feel that it wasn’t the most friendly of races. So back on the other side of the bridge and towards Parliament Square ready to run over Mr Gove and anyone else I can get my hands on who is going to prevent me from entering any more events next year.

By this time my knee was beginning to hurt, I felt pain, I slowed down as someone tried to hand me a beer – erm…. I don’t think so and it’s not funny either. 1km to go we are told as I run back round Parliament Square to try and run over Mr Gove again but still can’t find him and up Whitehall to the finish. Sprinters were supposed to go right and snails left but I couldn’t see any sprinters so I went right, overtook a few snails and hit the clock time (gun time) on just over 49.40 having no idea of my chip time as there was no tick tock clock at the beginning, even though Big Ben was still lurking there.

Pain is inevitable; suffering is optional

Grabbing an energy drink and a bottle of water I look round for my ex beeb mates without luck so ring my mate who was watching me cross the finish line, I stretch and feel a pain in my lower inner quad, no broken leg then, just another odd injury, ice ice baby, later.

A good run given injury prone, hot hot hot, too much congestion despite the congestion charge and not having run for 2 weeks, I managed a time of 47.09. That’s pretty good then really.

Happy and hot. I run like a girl…catch me if you can.