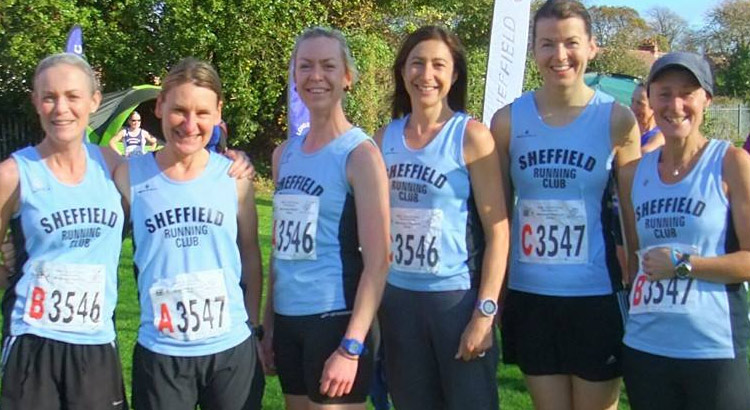 A minibus driven by club secretary Mike took us down to the British Masters Cross Country Relays at Moorlands stadium in Derby. We arrived in plenty of time to set up camp and warm up. The course was only 2 miles long – 1.9 miles long to be exact and looked very flat very very flat too flat? Is there such thing as being too flat? with 5 metres of ascent or something crazy like that this would be easy right?

Wrong… This was speed on grass a lethal cocktail of drugs at its best or worst?

Cross Country — It’s not how fast you run, but how long you run fast.

We had two teams of 3 Ladies Vets. An extremely speedy ‘A’ Team consisting of Clare Sue and Debbie and a solid ‘B’ team consisting of me Debs and Michaela. You know you are getting old when you are no longer looking the youngest at a VET’s cross country and some of the girls have little vests on. (AKA yellow bikini girl who was very very very speedy)

I was on first leg. I used to hate first leg but grown to like it in every way possible. I like VETs events running with people your own age and above and sometimes feeling that little bit younger despite the many thousands of wrinkles.

After being explained the route – how complicated could it really be for 1.9 miles? We would cross the road (a.k.a footpath) on the 2nd lap and only on the 2nd lap and if we got it wrong we would be disqualified. I’m glad I brought you up to speed on all that then.

I positioned myself midpack-ish to start with and on the word ‘Go!’ I could see fellow club member Clare leading the pack out right round the track and up the first slope. I was in my happy little place around 15-20th that would do me for now. The spikes felt grippy instantly and I soon got my power surge as I flew down the slope and into the woods. This was actually ok this spike land. Why didnt I try them before? I would be eating humble pie afterwards and learning to never say never. Wow this was a fast event…speed on a stick or two.

On lap two I began to work my way through the pack ticking off people. A strange distance for me is this 2 mile lark but I was OK.  I could see Clare ahead struggling with here knee just a few places in front of me.

I bounded on through the woods for the second time chasing Clare and a couple of others ticking a few more off my list. With a polite cheer from minibus driver Mike I raced on through the ‘warning roots ahead’ sign and gained a place up another slope to slot in behind Clare.

You cannot propel yourself forward by patting yourself on the back

Down the last slope I tried to fly failing to imitate Clare’s impression of Wandering Albatross as she flew down the hill in-front of me.

‘100m to the finish’ – a big bold yellow sign shouted at us as I crossed the ‘road’ back onto the grass. I gave what my little legs could give chasing Clare to the bitter end. And here comes Sheffield RC and here comes Sheffield RC. To say I was panting like a puffed up blowfish would be an understatement. 1.9 miles in 12 minutes and 49 seconds. Owch that hurt.

We watched the other girls do their ‘thing’ shouting words of encouragement to our lovely blue vested runners. We put on a good show the ‘A’ Team coming 2nd and the ‘B’ team coming 6th. Not bad for a short sharp bit of running.

After endless cups of 80p tea we watched the old men do their ‘thing’ round and round they went to bring up a rather pleasing 12th place.

A pleasant day out for all in Derby

As I went out to Derby, upon a market day

I spied the biggest ram, sir, that ever was fed on hay

It was the biggest ram, sir, that ever was fed on hay

Nothing to do with running I just liked the little verse.