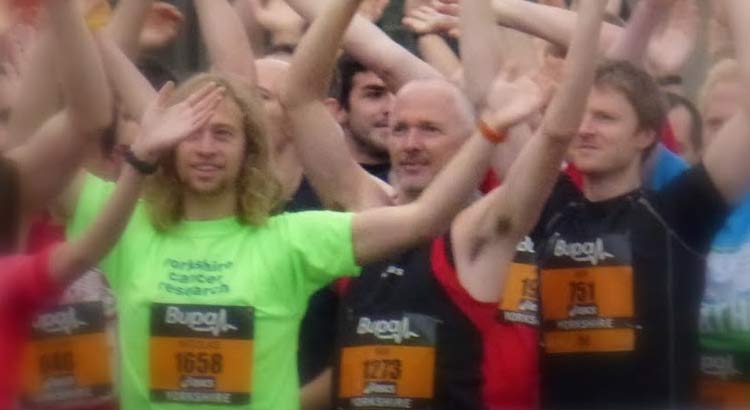 Supporting an injury on both legs, ligament damage and tendinitus I ensured my head was in a better place for this Sunny Sunday September run alongside 8000 other runners. The route from Sheffield city centre down to the Sheffield Wednesday ground at Hillsborough and back again. I decided the head was not injured so I would run, and I would run in Orange. That is the orange wave, supported by a purple top, not as an orange.

The orange wave seemed to be full of healthy young men, and me and a couple of other lonely females as we walked down to the start line to see “END” on the clock. Nice one, is that it? Oh I see we have to run all of 10k even though we have just crossed the line with “END” on it.

Good news though, the route was slightly easier this year, with not so much a hill finish – starting and finishing right outside TJ Huges rather than up near the Crucible as per last year, and I was ready for the hill this time.

Congestion on the downward start and a few parked cars made it hard to go too fast at the begining. Missing the 1km sign but chatting to one of my fellow Don Valley runners (Hi Alex! who was running much faster than me, showing how to do a sub 45) but that gave me a few 100 metres extra boost to bounce onwards even though I was aware of the injuries. I was going somewhere as a quote crept into my mind:

One thing about racing is that it hurts. You better accept that from the beginning or you’re not going anywhere

This was a comfortable and simple run from the start, comfortable in pace although my new trainers felt heavy I was glad I was not running in slippers with a cup of tea and digestive biscuit in my hand. But no, oh no, I ran on, 2km mark, 3km mark, 4km mark, this felt good. I felt like I was flying even though the speed felt unspeedy. I was no roadrunner today.

Life is complicated. Running is simple. Is it any wonder that people like to run?
– Kevin Nelson

The 5k mark supported a massive screen but I wasn’t going to wave at myself instead concentrated on avoiding the cameras and passing the very inspiring lady in the wheelchair. Makes me thankful for what I have.

Then I get a shout out as another fellow Don Valley Runner (Hi Clare) shouts my name, with a friendly wave I stride on towards the 6k mark feeling very strong and in control but not expecting to beat last years’ time of 46.40ishsomething. I was just enjoying it, feeling the comfy stride and trying to catch those big stridy blokes in front of me.

And then another shout out, and a wave to my best mate Becky who was running this for the first time, both of us supporting “Kidney Research” vests ready for our Great North Run in 2 weeks time. I felt happy and relaxed, not pushing it at all, little pain, little pain is good. Big pain is bad.

Running is my sunshine, the sun was shining the runners were running as the final shout out to me around 7km from Bob – yet another Don Valleyer as we waved at each other. This was such a great, friendly race, I was just loving every minute of it, aware I wasn’t running that fast but just really enjoying it.

Do the work. Do the analysis. But feel your run. Feel your race. Feel the joy that is running.
– Kara Goucher

Near on 9km I snigger as snig hill approaches and others slow down, I stride up as all problems are taken away from my head and my body, overtaking most (if not all) on the hill – I am a Sheffielder and I am prowd I can do hills. 9km approached, downhill, the big boys passed me – that’s fine I caught them up at the 400m mark up commerical street a few minutes later. I must admit I missed the Queen song “Don’t stop me now” at the 800m mark to help us get up that hill – where was it Bupa?

So, the final stretch the hill, the hill and nothing but the hill, yet it felt quite ok, not struggling just powering up at a steady speed, comfortable, happy and overtaking most people. Still a Sheffield runner just as I was a few minutes ago, round the corner and clocked the clock time in under 50 mins and 20 seconds. No idea what my gun time was as I was running without a watch or phone and the start clock was still saying “END” – well this was the end and I felt fine as I ran back to the car to grab my phone to take some photos. I felt well and truely fine, the most comfortable run I have done, so how did I manage to clock a chip time of 46.17? Beating last years time, the years’ before time and the year before thats time. That’s time. Happy Helen.

The most beautiful motion is that which accomplishes the greatest results with the least amount of effort.
– Platon