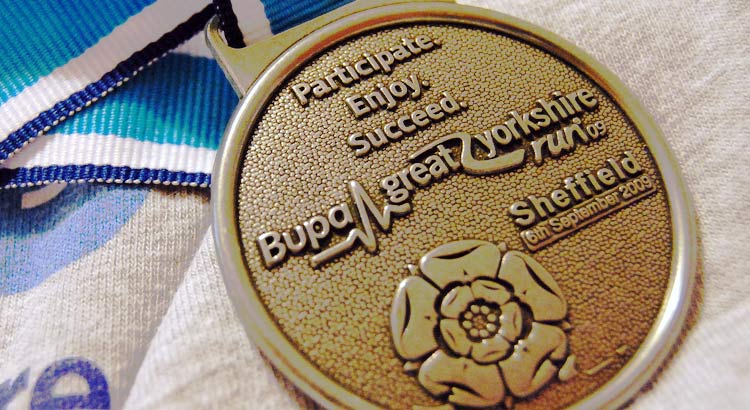 The beginning of September, the air is crisp, cool and perfect for running. This is why so many runs take place in September. With my mate by my side I drop down a wave so we can run together as I was put in orange.

Really well organised for the 8000 runners packed into Sheffield City Centre. The waves were staggered every 10 minutes.

Around 9.40am the white wave gun went off and off we ran down the hill, round the roundabout and down towards Hillsborough on one of the flattest routes in Sheffield. A slight change to the route last year but nothing major, and much easier at the half way point where the big screen and lots of cheering welcomed our 5km mark.

A race is a work of art that people can look at and be affected in as many ways as they’re capable of understanding. – Steve Prefontaine

Taking in water at 5.5k onwards and upwards I ran overtaking many of the orange wavers. Knowing “the hill” was looming at the end I saved some energy for that as I saw people even walking up the “practice” hill at 9km known at “snig hill” – I was the one sniggering at them. Just not used to training with hills! Corporation street loomed upwards beyond Ponds Forge International Sports Centre towards the finish line. It was only around 400m to the finish but the runners began to walk as the hill took its toil.

Round the corner back onto Arundel Gate more and more runners haltered, swearing under my breath as my pace had been interrupted I continued to run overtaking many soft southern runners to the finish line, coming in at a sub 47.