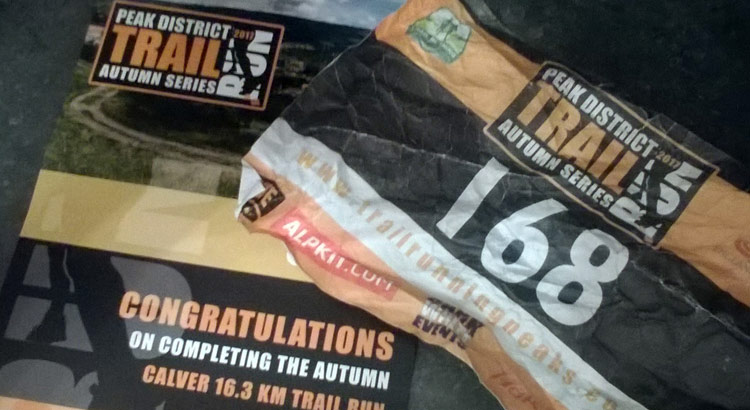 After doing the Limestone Way Ultra at the beginning of October with the Dark and White event guys I thought I would enter the Calver 10 mile trail race at the last minute (literally), knowing how organised the Limestone Way had been it could be fun, right?. Again, close to home, and cheap promising tea and cake at the end what was there not to like? It also covered pathways that I hadn’t been on before, amidst some of the Grindleford Gallop route in reverse.

I had hoped to reccie the route a few days before but my body had a meltdown and I had to abandon my ‘reccie’. When my body melts down I tell it to stop, and I do just that, I stop. Sometimes it just refuses, burnout, often just for a day especially if I have been doing a 12 hour day at work(s). So I eat cake and drink tea instead. So I didn’t know the route, but it was supposed to be well marked so that was ok.

In a similar style to the Limestone Way Ultra, there were windows to start in. Not the ’round window’, ‘the square window’ or the ‘arched window’ like playschool, this wasn’t playschool, it was playing in the peaks school. I chose 9.10am – somewhere in the middle. I didn’t want to go with the last guys as they would be too fast for me but didn’t want to start at the start as I was too lazy to get up any earlier so 9.10am suited me perfectly.

Running is a grownup’s lost link to playing outside

Calver is a beautiful little village in the Peaks with some beautiful old cottages. It’s about where dark peak meets white peak.  I thought parking would be a nightmare but it was a piece of cake – which we all got at the end.

Registration was slick, walk up, say your name, given number and dibber and a nice map in a plastic bag, and off you go but don’t forget to check the compulsory kit. Today you MUST have a hat and gloves.

The weather forecast was predicted strong winds and rain. The wind was correct, the rain was so so. It was the first race this year where I had supported my gloves and hat as mandatory equipment. Although I had no rucksack as most people did, I carried all compulsory gear – hat, gloves, (and buff), long leggings even though I had some crazy blue 3/4 ones on, proper trail shoes of course, proper waterproof (taped seams). The only thing I didn’t take was waterproof trousers which were recommended but not mandatory. I also had my little bum baggy thing which carried 500ml of powered stuff and an energy gel which I didn’t use but was there for an emergency. Emergency meant if I fell down or something not if I pretended my body needed a bit of glucose to make me go 2 seconds faster.

So there we had it, all kitted up I made my way through the village and ‘up the hill’ to the start. Just beforehand I had to do a ‘running dance’ outside someone’s house I knew (who will remain nameless for privacy reasons) whilst they were gazing out of the window probably drinking the most satisfying cuppa tea ever laughing at all the windswept runners going for a 10 mile wind fight around the local trails.

It was windy and windy it was. Not just windy but windy windy. The strong winds even before the start were blowing the 9.10am runners about. This was certainly not going to be a breeze.

We dibbed in and off we went. Some of the guys powered up the stony bridleway, a hill pointing upwards at its very best, fighting against the strong force of the blustery weather. It felt like one step forward two steps back. After about half a mile on trackway, I got into my ‘groove’ and decided to embrace the wind instead of hating it. Waterproof hood up and eyes forward but a little bit down as we say in swim teaching, I wasn’t going swimming but there were still a few puddles to dodge here and there too. Eyes had to be forward just that little bit to see the brightly coloured arrows immaculately marking the course.

Due to the nature of the game, you never know where you are in the pack. Although I couldn’t spot any other females in my ‘time window’ in front of me I knew there were a couple close by and the faster girls would be in the later windows. This was my pace and I was happy just being able to run.

The route wound up muddy tracks and across fields, the gusty and turbulent weather added to the fun, sometimes being blown sideways and backwards, amusingly challenging. There’d be no fast times today.  There was a bit of that tarmac stuff – I think its called ‘road’ but I am not sure as I don’t really do too much of that tarmac stuff. It was definitely downhill though and sheltered a little more to Cavendish Mill which was new territory for me. Across a few more muddy fields, it felt like the contours were dropping and we were heading ‘home.  At around 5 miles the feed station, dibber point and cameraman were waiting for us. Hello and thank you I said, as I dibbed in and ran onwards, not taking any water as I felt ok.

Once on one of those tarmac stretches again the battle with the wind commenced. Finally, I recognised the route from the Grindleford Gallop as I galloped onto the limestone trackway. No sooner had I galloped on, a girl came galloping past me, much stronger on those downhills, but as she commented on later, she kept looking back knowing I was apparently ‘strong’ on the uphills. I used her to chase my own feet, but she was too nimble for me across the puddles and down the hills as meandered around wide pathed trails towards the village of Eyam. There were lots of runners now on the trails from earlier windows, having fun splashing through the big wide puddles. I do like this concept of windows, as it feels like a really good community run.

Leave the road, take the trail

Through the delightful village of Eyam we ran, the odd morning day walkers glaring at us with slight trepidation.  The nimble girl lets call her Lucy (because that was her name) was in sight, yes she kept turning around, yes I kept chasing but knowing my legs couldn’t go any faster even on a patch of straight tarmac which some may have felt was nice and flat. Here I learned that if I haven’t reccied a route then to look at the map and contours beforehand as I was hoping it would follow the Grindleford Gallop route all the way back to Froggatt Bridge, up first then down the fields but it took a bend round the hilly bit to my disadvantage. I cried out in my head, ‘I need a hill’. But I got over it and continued to put one-foot in-front of the other.

On the grassy fields back onto the Gallop course in reverse one of the fast guys came whizzing past, I was beginning to lose my momentum having lost the Lucy girl in-front too but still saying hi to the others in other time windows as I fell down the fields one slide at a time.

Once at Froggatt bridge it was about a mile and a half of flat river trail paths. My body was draining slowly. How can I run 43 miles and feel so alive yet put me on a 10-mile route and I am knackered after 8.5 miles?  I couldn’t keep up the pace, yet this was flat, flat I tell you, flat, it followed the river round back to Calver, it was therefore flat. I felt sluggish more so than fighting the winds some 9 miles earlier. That last mile felt like 3 miles as I pushed on to the finish. But eventually, I got there,  after dodging a blown down tree from the high winds of the week before.

Brain: why are you going so slow?

A most enjoyable easily runnable-able, (not easy but easily runnable) well-marked route, perfectly organised event, the blustery gales just adding to the variety of the fun.

A nice ‘gold’ certificate was presented to me for running under 1 hour 30 which was my target, along with a cuppa tea and a nice piece of cake which was my second and third targets. That’s all that’s needed for a great little trail event to satisfy any little trail runner.

I was more than pleased to find out that I was 3rd overall (1st FV40) beaten from 2nd by Lucy just over 20 seconds and by about 6 or 7 minutes by another Lucy.  Can’t argue with that. I was then off to walk up Winn Hill with my friend Lucy and four kids. Must have been one of those Lucy days.  Happy Running.