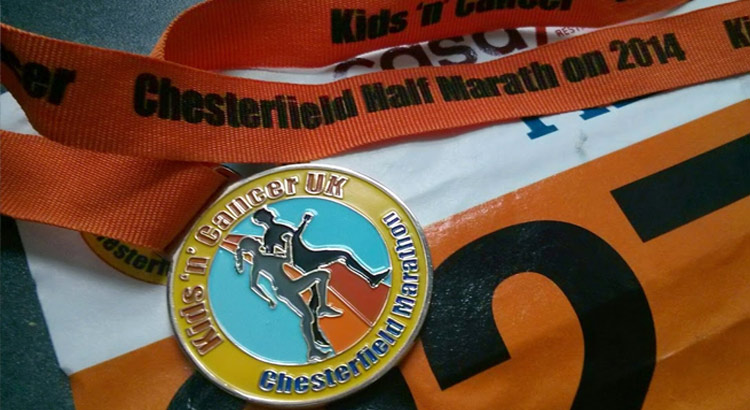 Two weeks previous to the Chesterfield Half I ran the Ring O’ Fire Ultra-marathon, I promised myself I wouldn’t ‘race’ in September and let my body recover, even though I was actually feeling much better than I thought I would after running 135 miles.

So I managed to get hold of an entry for the event only a few days before thanks to injured fellow club member Sarah (but still boo hiss to injury) in order to pace my best friend Becky around the course.

The event held not only the Chesterfield Half Marathon but the Chesterfield Marathon and also a Marathon Relay so lots going on in one space. I had heard complaints about the organisation of the event even months before but the whole experience exceeded my expectations.

In true Ultra-marathon running style I decided to leave the car at Totley in South Sheffield and run some 8 miles or so down to Chesterfield to meet Becky, run the half and then run back to the car starting at 6.20am in the morning just in time for daylight.

The peacefulness of the world at this time of the morning was blissfully calm. The run down through the picturesque Totley Brook at 6.30am sums up the beauty of running on trails. Across grassy fields and then dropping through Holmsefield Park Woods down towards Millthrope and onto Barlow and then finally Chesterfield Town Centre. It was still early when I arrived in Chesterfield – not quite the rush of people you get at the Great North Run at that time of the morning. A passing comment as I was running up to the start from a Marshal ‘here’s a keen one already’ made me grin slightly. At least I wasn’t racing!

It was a bit like dolly mixtures, marathon runners, half marathon runners and relay runners all together – recipe for disaster or too many jelly babies? Well actually no, we all seemed to spread out quite quickly around the town centre once we were off.

Within a few minutes, fellow club member Alexa supporting her club vest came running past us, I said hi and wished her the best of luck. For both my friend and Alexa this was a fast training run in preparation for the Robin Hood Half a few weeks later.

We headed onto what was supposed to be the highlight of the race ‘on a dual carriageway’ a concrete jungle of hell for me but all the same this was a road race.  Miles of runners spread out across the ‘dual carriageway’ allowing every runner to find their own space and avoid tripping up against each other.

A few miles in we took the slip road up and round some lovely country roads. Both of us were desperate for a wee and were not prepared to queue for a portaloo which were sporadically spread across the course with queues.  That’s just silly when you can jump behind a bush and whip it all out tiddle on some grass and get stung by some nettles on the bum – much more fun than a portaloo – right? We do it in ultra-marathons so why not in Half Marathons? Really…

Onwards and upwards as suddenly Becky had power after her wee, pacing up the hill beating everyone else around us, 5 miles in, 6 miles in, the miles were ticking away nicely. I was holding her water bottle and had a rucksack full of food for myself as well. I was aware that I had run 8 miles plus another 5 or 6 and not really eaten so munched on a cereal bar whilst we ran and chatted around a not so picturesque industrial estate. Still,  there was plenty of space to feel free and run and enjoy the surroundings.

We are only half crazy

The route took us up more hills and onto more main roads. Then through Hasland just after the 10 mile mark, as crowds began to thicken. Hasland had gathered all the village people; altogether now….

Then the crooked Spire Church came in view, the iconic landmark of Chesterfield town centre just as the course descended back down to the town itself. We had made good timing at the 10 mile mark 1.46 minutes. We ran onwards round the station to hit the busy A61 – busy with runners of course.

I kept a few paces in front of Becky trying not to push her too hard but knowing in my head that we could achieve a really good fast training run pace here. I was chatting away not looking at the non-picturesque concrete ground. It’s concrete after all, no stones, tree roots, branches, dogs, dog poo, loose gravel, oh no, the only thing you find on concrete dual carriageways is….cat’s eyes. And guess who tripped over a cat’s eye? Look where you are going next time.

I was trying to push Becky a little more as I knew although we were not ‘racing’ we could make a sub 2.20. The last mile stretch was monotonously tedious, a straight road with just cat’s eyes to watch out for. We were close, but we [Becky] could do it.

Every little helps, no not cat’s eyes, energy gels or water, but Tesco Extra came into view which meant that the finish was not too far away. The crowds began to thicken as we turned the corner and ascended up the slope. Arrows diverting the marathon runners to the right and half marathon runners to the left were clearly there to fool all the fools doing the full marathon.

The finish was in sight I could see the clock at 2.19 something but knew the chip time would be less, as we started near the back. We crossed the line in just under 2.20, very happy result for Becky. Result!

A 2 litre bottle of water at the finish was surely a bit of a dig at the Sheffield Half guys earlier this year? Chesterfield 4 Sheffield 0. We were also able to help ourselves to bananas and some chocolate before going to collect our nice little medal.

A couple of minutes later Alexa finished, although confused to how she was behind us at the end, we all admitted we had to do the wee stop, see we are all human at the end of the day. What a lovely day.

Off I went again to run home. I got caught up with the Marathon runners on the way home but running the opposite direction ‘mummy she is running the wrong way’ – spouted out a 5-year-old. Even the marshals gave me funny looks. ‘Done the half’ I said ‘that’s enough for me’ as I made my way back to Sheffield on foot.

The only way back was up.  Up, up and back up the hill. Another delightful run, taking a slightly different route this time until I hit the woods, straight down the grassy fields saying hi to a few dogs and back into Totley Brook. Once back at the car I didn’t realise I had clocked near on 30 miles. Not bad for a morning of running, a banana, a 2 litre bottle of water and a nice little medal.

Many thanks to club member Sarah for the entry. Congratulations to everyone else who ran, including Dean who in true Gentleman style got a random stranger round to a staggering PB. Congratulations also to Sheffield Running Club Members; Sue who was 2nd Female in the half, Helen who won the Marathon and Leanne and team who won the ‘team’ , Alexa and everyone else who ran, run and wee’d.

Never pass up an opportunity to pee