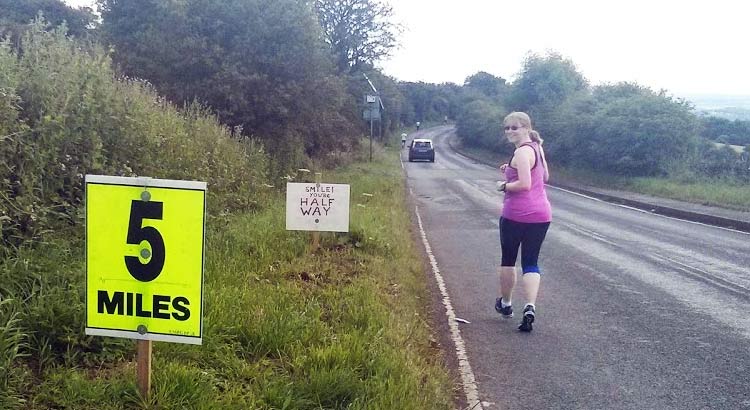 This race had always been held at the end of August and always clashed with other events, so when it came up that it was the first Sunday in July myself and friend Becky jumped in to register.

As it clashed with the Tour De France coming to Sheffield the field would be a little small this year, but that didn’t stop us. Far from it, in fact I had a plan, a plan that would involve running to Chesterfield from Sheffield (around 15 miles), run the 10 miler with Becky at her pace and then run back. The plan worked – more or less.

So off I set at 7am in the morning with map in rucksack plenty of water and a vague idea of my route. I did get lost a couple of times including running straight past the start at Holmebrook Valley Country Park. I clocked up just under 15 miles before proceeding to run another 10 with Becky in the race.

Once the runners had lined up and introductions had been held we were off. Positioned near the back we ran out, Becky’s pace but myself next to her helping to pace every step of the way.

The route took us out on to the main road and up Cutthorpe. Within a mile the hills set in, a couple of long steady climbs passing Linarce reservoirs. It was a lovely experience running at this pace, chatting to Becky and even making conversation with other runners. Becky powered up the hills whereas surrounding runners were stopping already just a few miles in.

The marshals were faultless cheering us on at every opportunity. ‘Well done girls’ they would cheers, ‘keep going’, ‘nearly at the top of the hill’ (until another one came into sight). ALthough this was a road race the blissful countryside stretched across it the far distance making it somewhat special. No chalked signs of ‘ey up t.d.f’ or ‘ey up duck’ as they say in chesterfield.

The route took us up some more hills at least 4 miles of them, Becky swearing under her breath ‘I thought that was the last one’ she muttered as I held her drinks bottle, chatted and took photos. This was fun, enjoying the essence of a race with great company. Once up on ‘Gate Inn’ one of the runners informed me we had climbed over 600ft in whatever time and proceeded to give me a run down of every other stat available on the route – pointing out that he had run up Winn Hill once and it was the hardest thing he had done. Another hill aptly named ‘Pudding Pie Hill’ with no pudding or pies but just runners opened up to stunning views of Derbyshire and chesterfield.

And then down we dropped, 5 miles in I took a picture ‘Smile you are half way there’ boasted a hand made sign, so chummy, silly signs like that always putting a smile on my face.

Back into Suburbia we headed around a housing estate where we could spot the finish even though we had 2 miles to go. Punishing yes but knowing that all the hills were out of the way – well kind of. A welcoming drinks station at around 8.5 miles helped us to plough through to the vicious end.

They’re almost running out of beer at the finish. Better get a move on. – Fuel Running

Back on the main road an incline threw a lot of the surrounding runners. Becky was doing so well, powering past people now, running strong. As the road levelled out I told her we only had half a mile to go. Shut Up Legs as those on the T.d.F would be saying.

That’s the thing about running: your greatest runs are rarely measured by racing success. They are the moments in time when running allows you to see how wonderful your life is. – Kara Goucher.

And then back into the park we went with grins on our faces ‘ Well done ladies’ as we ‘raced’ to the finish just allowing Becky to slip 1 second in-front of me to a Garmin time of 144.59. (Official time 144.57). What a fantastic race, route and a pleasure to run with great company. We were handed a bottle of beer at the end and a nice green t-shirt. Lovely

After a chat I then decided to run back home through overgrown meadows, footpaths, wooded trails and tracks and the demon of it all, some road. By the time I reached Sheffield I needed water. A stop at a little spa enabled me to stock up on water and juice which almost all went down in one as the sun burned through on this pleasurable sunday afternoon. A trot down to Endcliffe Park and then a couple of miles back up home topped up my home journey to around 12 or 13 miles.

We only do well the things we like doing. – Colette

A fantastic day out with breaks and some good milage between. This is what they call the feel good factor.