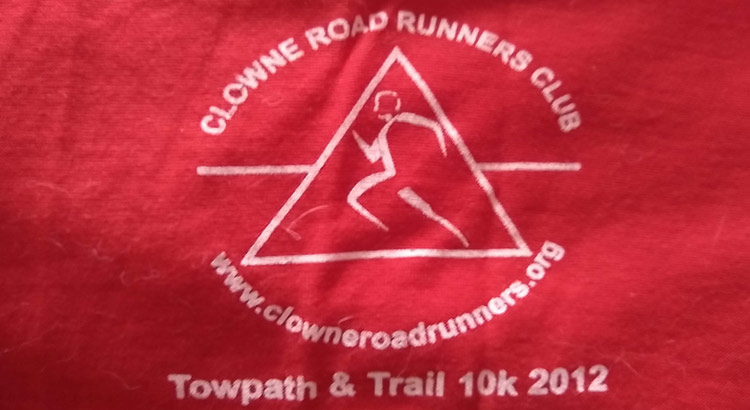 It was no laughing matter as me and my friend headed towards Worksop for the Clowne Towpath and Trail 10km on a dull May Sunday morning.

After spending half the night up with a very sick cat I didn’t have high expectations for this. Did you hear about the cat who drank 5 bowls of water? She set a new lap record. Well that wasn’t going to happen today surely?

Even from the walk down to the ‘finish’, toilets and baggage area everyone seemed really friendly and helpful. Baggage – dumped, wee’s and poo’s dumped and off we jogged to the start line just above the finish line.

It wasn’t chipped but then it was a nice low key cheap race so who cares. I positioned myself some 10th deep as I wasn’t sure of the field, some people had signed up last minute due to the Chatworth 10km being cancelled so a bigger and probably stronger field than expected. Great to see a few familiar faces from Totley AC and from my previous running life. I decided not to wear my club vest today as I didn’t want to spoil it for next weeks’ running.

And we were off, I was supporting my new Garmin 410 with the fab little wrist band – like like like. The first 1km was up hill on a path, as I powered past people; this was my sort of run, up hill, up hill and up hill. Once at the top it was quite surreal though surrounded by runners I felt elevated, and I hadn’t travelled in an elevator to get here, even though it felt like living in an elevator. Downhill I flew, for almost the first time ever I found myself flying past people down the hill what was that about, as my body lifted off the floor and I let gravity take its cause – just learning to run maybe?

And then we were on the tow path, round a couple of accessible Chicane type gates (thats what they are called as they are accessible to wheelchairs and runners) and straight ahead following the river and beep! My watch signaled 1 mile. Now I have never looked at my watch in races before, thats because I haven’t ever worn one before – previously supported by my phone or nothing, a sneeky peep put me at a 6.40 minute mile, wooo steady on girl, and that was uphill, far to fast far to fast.

All these 300 or so runners followed the Chesterfield Canal, winding its way around the countryside. This was really quite nice.

By around 3km I was following “iron woman” – a woman supporting an ironman waist belt – I am sure I know you I do I do know you, I am sure I have followed you before – dammit! I overtook ironwoman who looked much more athletic than little me, then around 4km she took the lead though was very friendly as we both hit the grass and commented how tough the grass bit was.

A mini marshall probably aged around 8 years old told us to go straight on, and we were back on the towpath round a loop dee loop, up a couple of bridges, no time to admire the pretty locks and back where we came from, nothing to do with the Feeling (look up the lyrics)

However, I wish I was feeling fine but I was feeling rather drained by now, knowing I had gone out too fast. There were a couple of kissing gates to go through, no time for any kissing and cuddling though, even though they did swing in our way and slow us down it was all in the name of a trail race.

Feeling the struggle I ploughed on knowing I had slowed down far too much as another girl overtook me and the two girls then got some good distance in front of me, keep it up keep it up come on. No one was around me so no one to ‘race’ which was a bit of a shame, and then just 1km to go through some fields, including 2 wooden stiles, supposed to give people easy access but act as a barrier to animals – well they were a barrier to runners, did this mean that we were animals?

Pushing through the long grass I overtook one guy and then heard the finish guy on the mic signalling not to far to go. Putting in one extra little push over the next stile back into the field. Just one lap of the field, go on go on go go go, pushing through the grassy bit, and I saw the clock at 41.30, my pb was 41.43 so I put in a sprint at the last 100m to cross the finish line at what I thought was 41.41 being 6th lady. The official results have me down as Sheffield A.C when I am actually Sheffield Running Club – which is odd because just as I was crossing the finish line they shouted out my name and said “Sheffield Running Club”

Don’t ask me why I #run. Ask yourself why you don’t – #TrackNation

A very varied and enjoyable race, with one hill at the beginning, mostly flat-ish with bridges to cross, gates to open, stiles to jump across and those bikey type metal bar things to squeeze past, a pinch of road and a few grassy fields made this run really interesting. It is a shame that it came in some 0.25km short according to a variety of devices, which could theoretically add on another 1 minute or so to the times, but credit where credit is due, the winding up and down and it being a trail race meant that the time was very very strong.

I did go out too fast, with my first three miles being sub 6.40s which I didn’t even know I was capable of and my next three miles being between 7.10 and 7.14. And to think I do no speed work nor hills in my running I just run along and run long. Ok so maybe the time is slightly off due to the shortness of the course however I am pleased with my efforts today.

Instead of a cheap t-shirt we got a buff, they seem to be the rage right now – I will be buffed out soon, we also got some of those plastic wrist bands that supported the Clowne Running Club and “Get Running” on them – kinda cute. A fantastic shoutout goes to the homemade flapjack which was amazing and everyone who helped out at the race because everyone and I say everyone was so so friendly. And hi to those that I knew that did brilliantly too including Becky who knocked a good 1 minute off her previous PB. Woop!