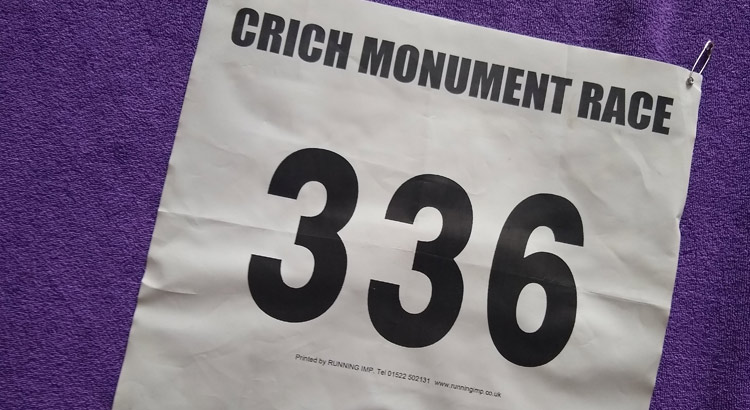 Saturday midday and I set off frantically to reach Crich to run up a big hill to the Crich monument overlooking the little village of Crich – Christ why not?. Why you ask? Why not I ask.

With only 10 minutes to spare when I arrived, I forgot my Garmin and ran to the start to register and stick a wonky number on my tee-shirt. The village fate green was in full swing with tempting cakes ice cream vans and lots of Vikings fighting each other. A wonderful village atmosphere.

Lining up the lovely Long Eaton guys who I met on the Nomad Ultra came to say hello to me as I was supporting my Nomad 50 t-shirt – a piece of clothing I am rather chuffed with.

The race started at 1.30pm a most interesting time to start a little race. It was approximately 11.3km, first going around the village up and around and then dropping down onto the canal and then back up the big big hill to the monument.

If you look up, you’re going down! – Eric Steele

And we were off. I had no idea how well I would do or how I was feeling as I as fuelled on just getting to the race before the start. I was placed mid pack initially I kept pace with the surrounding runners. Through the little village, I sped down the little hill and past fellow club member Pete who was supporting his club vest.

Up the first hill I went, people slowing already as I overtook a bunch of those that had gone off too fast. We were directed by friendly marshal’s onto the trails and up we went through fields and over stiles. Congestion was high at this stage but it didn’t hold me back. A couple of girls were in front of me but I concentrated on my own run watching my step every foot of the way. This section was aptly named Coast Hill – who is coasting here really? Then across ‘the Tors’ we went to another hill ‘Hagg Hill’ – we also have a hagg hill at home. Oh I feel so at home chasing the trails with the sun beating down on me.

Running is my sunshine. – Joan Twine

Over and through some pretty woodland we went and up some more hillage. Then down down down we flew, first through a slightly rocky field and then onto road before being re-directed back onto trail to be told ‘enjoy this section its all downhill to the canal’. Blissfully unaware that I was 3rd female at this stage, I skipped down the rocky terrain enjoying the wooded trail, jumping over the little rocks and tree routes. This was fun and I was feeling good.

A little more congestion as a couple of people struggled down the very rocky path aptly named ‘Crich Chase’ to Cromford Canal. Although I am not a great downhill runner myself I am getting better by learning to propel downwards with small steps and have more confidence in myself. I actually enjoyed that downhill section.

At the bottom we hit the canal where I overtook one of the girls and powered through the canal path towards Whatstandwell and up to Wakebridge. I recognised the path from a run I had done from Sheffield to Derby some 6 weeks ago. Flat flat flat with the sun beating down trying to chase any shadow that emerged in a somewhat exposed area. I overtook a group of guys running together and then another two guys, feeling strong and stable. I actually felt like I was running well.

It’s amazing how the same pace in practice can feel so much harder than on race day. Stay confident. Trust the process- Sara Hall

We were directed over a bridge after a water stop and then the hillage began, execute the hills girl, execute. First woodland ascended upwards as I peeled off another couple of guys who gave me a thumbs up and a ‘well done’. Then onto a grassy bank which although wasn’t that steep everyone in front of me was walking. I took around a 10 second walk before powering up overtaking more of the guys. The sun was beating down like there was no tomorrow and I was still continuing to run strong. This felt good. I was in a good place. Good no great.

Round a little path and up further, we went. This 1000ft or so of climb to the monument was demanding and the powerful sun slapping down onto us did not make for this 1000ft ascent any easier.

The next water stop I too stopped to take a big mouthful of water, and a comment was thrown at me. ‘Second woman go girl she is just in-front of you’. I glanced up to see a rather tall girl just in-front. Racing head on, I asked myself if I could catch her up, and with all hillageness I could, I powered on up to run just a little behind her for a while.

I said a polite ‘hi’ as I caught right up behind her, and then passed her on the Crich Tramway path. Onwards and upwards I was there, fighting the hill with all my might. The battle continues.

I knocked another male victim off my list and continued up to the monument. The monument was in view and it looked rather a long way but it was feasible. Anything is feasible. It levelled out near the top and I found myself pacing another guy round the monument and people shouting out at me ‘Well done’ ‘first female’. I was smiling but knowing that I could be easily caught up and overtaken.

I love controlling a race, chewing up an opponent. Let’s get down and dirty. Let’s fight it out. It’s raw, animalistic, with no one to rely on but yourself. There’s no better feeling than that- Adam Goucher

The village loomed below somewhere amidst the finish. It was a fast descent down the road and then onto another field. I was still feeling strong, but had visions of the other girl hurtling down past me given my track record of running down hill. But alas this didn’t happen as another marshall shouted ‘first lady’ and a kind guy next to me let me go through the church gate as I raced on down past the car park and through the village once again. I thought the finish was in sight but we got taken around a rough traily field before dropping back down round the village. I was still feeling in power mode but putting every effort in to keep my position. Back into the village fate green I charged through to cross the finish line in exactly 53 minutes.

I was handed a bag which apparently was a spot prize bag and then my goodie bag. I then proceeded to drink the water station dry whilst watching Pete come in, getting a coke and chatting to fellow runner Dean and then watching Becky come in, Becky suffering from knee problems the terrain and down hillyness was not kind to her.

A few people came up to me to say well done and that I had apparently beaten the ‘local girl’. Walking away with x3 bottles of beer, x2 bottles of wine/champaign, a running shop voucher, a couple of other vouchers, a t-shirt and a long-sleeved top, for a little 11.3km run up some hills and back down again was the perfect way to spend a hot Saturday afternoon. Cor Blimey.