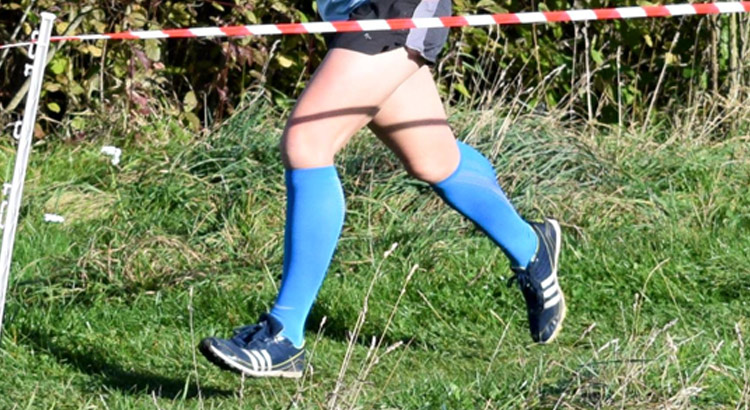 The Northern Cross Country Cutlers Relay Championships takes place once a year on a sunny Saturday crisp October morning. Runners from up north travel down to the border of “oopp north” AKA South Sheffield (the border is literally about half a mile away seeping into Derbyshire). A mumble jumble of northern accents, scousers, jordies, hullarians, yorkies, Leedifers and even Gatesheaders descended on Graves Park Sheffield for this popular event.

The event spreads over the whole day to the amusements of local dog owners who do not know what is going on. First up are the kids – from 11am to 1pm running in all categories up to Senior level, with somewhat shorter courses. Then off go the Senior and Vet’s for a 2 mile run, followed promptly by the senior men and VET men who do 2 miles with teams of three and four. So a full day of fun and run for club members of all ages, organised by the very own Sheffield Running Club and Northern Athletics Association.

This year for me was slightly different. First I was marshaling. So at 7.30am I arrived at Graves Park and put up lots of arrows to show the runners where to walk. Yes I said walk, as they had to walk from the car park to the start and needed to park their car ‘miles away’ ‘ohhh its a long way’ ‘but last year we parked in the park’ ‘why are we having to park the other end of the city’ blaa blaa blaa.

Job 1 done, job 2 involved standing at the front of the park directing people through the park to the start, supporting a green tea, five layers of jumpers and a banana. ‘how far to the toilets?’ ‘where are the nearest toilets’ ‘which way to the toilets?’ Is this a toilet race or a relay race? I wasn’t sure and had images of people running around dressed as portaloo’s or even a big poo.

I did my job well for the first half hour or so, being a nice marshal that I am and directing people to the start, ‘it’s just 10 minutes through the park’, ‘ straight through the park – 5 minute walk’ ‘5-10 minute walk follow the arrows till you get to the ducks then bear left if you are in Miranda you could also bear with to’.

Then came the cars – ”ohhh its a long way’ ‘but last year we parked in the park’ ‘why are we having to park the other end of the city’ blaa blaa blaa and repeat and repeat and repeat. So not only was I redirecting people’s cars to a place that I didn’t actually know where it was I was also directing people on foot through the park to the start as well as explaining to the confused local dog owners what was happening. Talk about multitasking.

My free lunch arrived (always a bonus for marshaling) and so did help which made it so much easier.

Once most of the crowds had gone I made my way to the start – following my fantastic signage, I didn’t get lost chatting to the wonderful marshals along the way all friendly helpers from Sheffield Running Club. It was then time to get my running gear on and make up a team of 2 (out of three) Ladies VETS. The two of us Jackie and myself, along side a full team of Seniors – Amanda, Rachel and Laura. Both the Vet’s and Seniors started together which always makes me feel a bit intimidated and I tend to hover near the back at these things as I always feel unpro.

The two start lines always makes me feel like I shouldn’t be here, where runners line up and then are told to keep their feet behind the second white line. Many of the younger girls supporting 6 feet of leg and spikes, me supporting my Veteran body and normal trail shoes. Slip slip slip sliding here I come.And bang, we were off.

I never planned to run this race fast due to racing the following day, so I started more or less at the back of the field but within a few hundred metres I was overtaking a few runners. There were a couple of Vet’s in front of me but as we had an incomplete team I wrongly didn’t push to catch up with them but ran round with a big grin on my face, being cautious not to slip in the mud.

Through they woods I went really enjoying the race, pushing up the grassy banks and being cheered on by the club marshals, always a bonus when running in races that the club marshal its always really nice to have words of encouragement from everyone. Up the second little hill I went over taking a few people and feeling really strong. I wasn’t putting maximum effort into the run but just really enjoying it. These were baby hills compared to the mountains of the Alps where I had just come back from so I did find it relatively simple in the whole grand scheme of things.

A very muddy and large trough slowed me down as I approached the sharp hill which I sploshed through with a little bit of dignity and pushed on up to the top. Round the park I went grinning like a Cheshire Cat, probably catching up with some Cheshire runners, and thinking of Cheshire Cheese.

Across the straight and I got someone else then pushed up the last hill still grinning still feeling good.

/Cross country..On a track, I feel like a hamster – Author Unknown

But alas the downhill bit got me again as one of the girls came whizzing down whilst I tiptoed down in a very girly fashion loosing a valuable place and valuable seconds on the run. I still can not run down hill, gutted.

Round the last bit of the park I went still feeling good but not wishing to put in any more effort or a massive sprint I just continued my comfortable pace to the finish line where Jackie took over to run the second leg.

A very enjoyable 2 mile cross country run. I thoroughly enjoyed it and felt comfortable all around. Maybe due to not going out at 100%; the race felt really ‘nice’ just like a ‘nice biscuit’ or a ‘malt biscuit’ or even a ‘chocolate digestive’. Just nice. You know when you have just nice races, this was one of them.