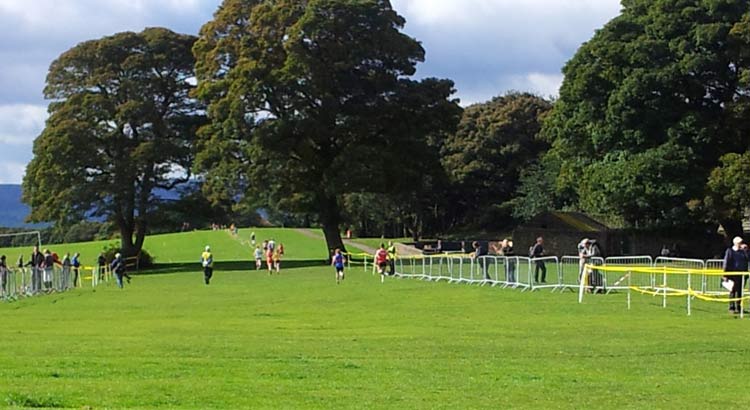 That time of year again, the Northern Cross Country Relays; ‘Cutlers Relays’ at Graves Park in Sheffield. Last time I ran these was 4 years ago, the day before I smashed out my sub 1.30 half marathon. Looking back at 4 years ago I was certainly my strongest, and ‘took it easy’ that day due to the half the day after..

I had to be on the first leg as I had come from one job (3 hours of Sports Massage at Clinic) and had to rush to another job (Swim Teaching for 3 hours) so why not wedge a quick 2 mile run in between jobs? Why not because I can.

I must thank Alexa and Chris W for allowing me to park near the start in order to make my race, without that I wouldn’t have made it as people were coming from all over the north of England for this 2 mile relay.

On my team, we had the lovely Sue who was back with revenge and Samya. After a brief warm-up I was ready to take my first cross country of about 18 months (last time I attempted a cross country I ended up in the med tent lets not go there again).

There was no VETS team this year, so I was mustered in the middle of lots of leggy 20 year olds with shorts short enough to be shorter than shorts. I hovered near the back along with Abigail from the club who was running in the B team though I was convinced she would be worthy of the A team, Abigails 5km parkruns are much faster than mine but then Cross Country is a different ball game.

The only thing I can control is me

And then we were off, and off the leggy girls shot, I was left behind instantly huffing and puffing. I couldn’t catch my breath, it was running away far too fast in front of me. It’s a fast start, a very fast start all downhill for the first half mile at least. Abigail was well in front of me as were 3/4 of the pack. I wanted to get into my zone but was struggling. I would grasp it half a mile in as I sped down the hill, the spikes coming into play as I flew past Abigail and a few others down into the ‘not very muddy woodland’. Cross country without mud what is the world coming to?

Believe in the run

Then the first of the 2 or 3 hills, fantastic. We are in Sheffield, expect nothing else. So up I went powering up with a wave and a cheer from Wuff the Strider and a few of our club members. The marshals were all Sheffield Running Club guys doing a fantastic job egging us all on at each point. Thumbs up to Graham and Clive and Neal, with a shout out from Mike at the top of the sharp short hill after a log hop.

Onto the ‘deer park’ and I had made up a few places ready to take my revenge on another girl in front of me as I could see her struggling up the final hill next to the farm. I would power up and attack at the top and take my footing to fly down the other side with a big cheer from Malcs telling me to watch my footing as I went down greeted by a wave from Alexa.

Come fly with me

The final stretch was here and I was determined not to be overtaken as Chris I gave me words of encouragement to keep going.

The finish was in sight as I passed the pedestrian way manned by and cheered on by Yvonne, Nick and Dawn and into the finish. Boom done. A quick breath of air and off to the pool I went.

I love the fact that myself and Sue got exactly the same time. 14.07. Boom double boom, boom boom. I will take that and run.