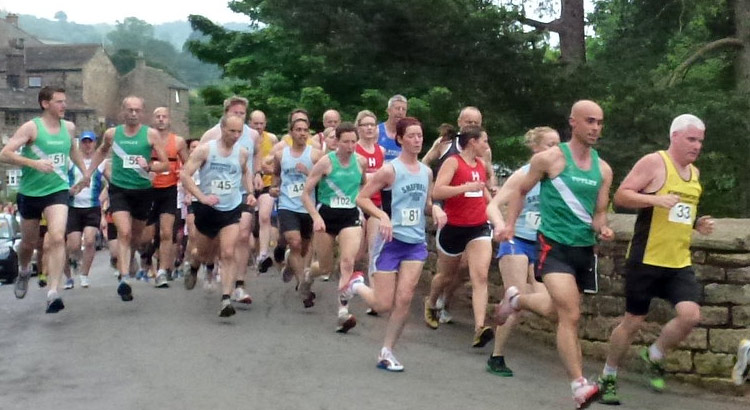 It’s that time of year again, the last week in June, which means the nights are now drawing in and 300 or so local runners take to the dam of flask at Lower Bradfield for a 3 or 4 legged race. No Camels involved this time around, unlike Percy Pud last year which takes in some of the same route.

The event is organised by the fantastic ‘Sheffield Running Club ‘ – say no more, and is open to club runners. We managed to get a good selection of teams out on the day including our female vets team consisting of Clare, Debs and little me, out of my league running with two other sub 20 5ker in past, current (or future) lives.

The nice thing about teamwork is that you always have others on your side. – Margaret Carty

So today’s excuses involved having flu for 10 days previous to the event, so only managing a 10 mile run at the weekend at at 10 min mile pace, 10 boxes of tissues, 10×10 flu tablets and staying in bed till 10am in the morning. Oh and I was supposed to be tapering. Just don’t make excuses; run girl run.

I had ordered good weather for this event, cost me a fortune, and wasn’t really fit for purpose, and I don’t think I could have got a refund either however I brought cake which went down well.
ph

Dam Flask was buzzing when we arrived, teams were sorted. We had a ladies VET team for possibly one of the first times. Clare was running first for us, then Debs then myself. At 7.15pm they were off across the bridge, up the hill and round the dam to go up another big hill, back down again and to repeat 3 times or 4 for the men.

Clare and Debs did fantastic runs, putting us around 7th or 8th overall, with possibly 2nd place for VETs – always difficult to tell with these things. Once my number (74) was shouted I lined up. I wasn’t feeling it from the start, the head just wasn’t in the zone. No excuses, just no zone.

So I was off, first I tried to start my watch and failed miserably so gave that up as a bad job. Club member Dave set off at the same time as me but by 200 metres at the bridge I was unable to keep up with him. My chest was tight up the hill towards the Plough Inn. I should be good on part of this route, I know it like the back of my hand and foot yet everything about my body just said no. By around half a mile in I was puffing and panting and failing to get air into my body, one step forward felt like two steps back. Dave had gained a good 300 metres or so on me by this time.

Round the Dam, I was running on my own just with Dave in sight. The hill was to come; the hill didn’t really bother me what bothered me was the way I was feeling, the negative heavyness in my legs, my negative head, by can not do this attitude, my breathing. I felt 2 stone heavier than normal, a couch potato, a big one at that.

Up the hill and one Doncaster VET overtook me, she was over 6ft that’s my excuse, I didn’t have the mental energy to chase her as I really did feel like walking. Then two Smiley Paces girls (both who looked like VET’s too) overtook me. I would normally have the fight to try and keep up yet my head and legs just seemed to have already gone on holiday early, it was just my body here doing some very poor running.

Just because today is a terrible run doesn’t mean tomorrow won’t be the best run of your life..You just have to get there.
– Author Unknown (altered by Helen)

Coming into the finish, I didn’t seem to know where I was going, and instead of going into the funnel I was focusing on the start line, my head just wasn’t there tonight and the finish proved it.

There is no “i” in team but there is in win. – Author Unknown

Do I want to make excuses? No not really; I had a bad run, we all have bad runs, on reflection it’s ok. I struggle with that distance anyway, my 10 days of flu has knocked me sideways and my head is in Ultra Marathon mode as I run around the Isle of Wight in just in a few days time and not 3.something mile mode. Ok they are excuses but it’s time to get over and and move on and go Ultra!

Our greatest glory is not failing, but in rising every time we fail
– Confucius

However I had a good eveningn with the club guys, the weather held up, the cake was good and the club ran away with three top three positions, Congrats to the Senior Men coming in third and to the VET’s over 50 men too.

Time: TBC something around 26 mins
Distance: 3. something miles