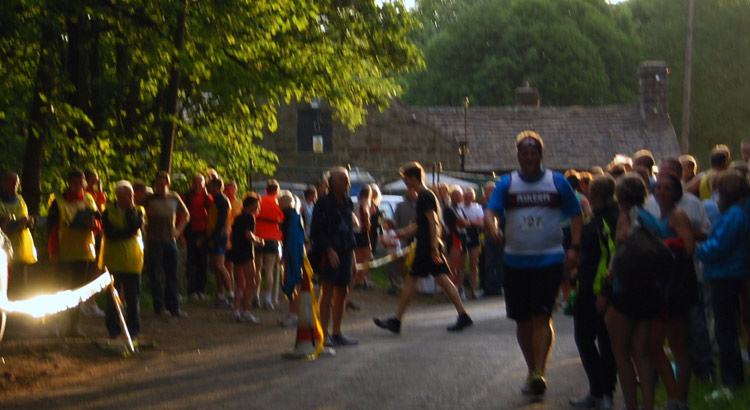 This was my nemesis, after having an awesomely terrible run x2 years ago I avoided it last year but this year has been the year of conquering my fears, so this time I decided to make up for last year and run twice if I was needed.

Low Bradfield is always quintessentially English at its best and worst come rain or shine, summer or winter. A beautiful ‘village’ setting nested between the lush greenness of the Sheffield Dams. Only 5 miles from the centre of Sheffield it boasts perfect running routes including home of the Percy Pud 10km race.

As club hosts for this event, Sheffield Running Club were out in full force, with more teams than you could count on 2 hands including x3 vets girls teams and x4 senior girls teams. Due to the amount of runners this year a good decision was made to start the vet 60 men and women 3 minutes after the guys. Great decision.

I was on first leg for the Vets B team. Although I don’t like being first in a relay as I find it intimidating it was the only way I could run twice for another team. So I took stance with the rest of the girls on this pure sunny evening and off we went.

Mid pack to start with I ran comfortably up the first hill towards the Plough Inn, I felt happy. The A team girls had gone steaming ahead, Speedy 3 hour (and 2 seconds) marathon runner ‘Sarah’, ‘Wheels on a bus go round and round – Clare’ (explaination later) and Heather who was doing the same as me and running twice, all positioned themselves nicely around the first part of the Dam. Once on the straight I pulled out of the pack I was wedged into, ran wide and got into a nice rhythm. The rest of the first mile was downhill and I found myself running with 2 other girls. Once round the wall dam I pulled away from the two girls to power up ‘the hill’ – about 3/4 of a mile of pure upness bliss. Love it.

Heather and Clare were still a way in front, Sarah not to be seen even on the hill. I used the two girls as a benchmark to at least keep the same distance between them, showcasing x3 Sheffield RC runners almost together. The gap decreased as the hill increased. But I knew that there was another 3/4 of a downhill looming and I would fall on this and the gap would increase once again.

Top of the hill, the three of us were running almost together, however in true Clare ‘The wheels on the bus go round and round’ she took off. Maybe she thought she was at an airport as she approached the runway and flew down the hill, legs going 100 miles an hour leaving myself and Heather in a dust of smoke. It was amazing to watch Clare power down the hill, the skill and speed gave me real running envy. Myself and Heather commented on it chatting for a bit before Heather took off down a steep incline leaving me to pick up my own pieces and once fight to the end.

Back on the flat with cheers from fellow club members myself and Heather battled it to the end together, working off each other to come in seconds of each other, tagged through to let the second leg runners do their job.

I had estimated about 30 or so minutes to my next round so just time to grab a loo stop and water and chat to fellow club members before lining up again for the ‘C’ team third leg. By this time runners had dispersed and some of the guys who were now on their 4th leg were intermingled with the girls.

Bev came powering in and I was off once again, back up the hill towards the Plough Inn with ample cheers on from club marshalls. One of our club guys came past me but that was ok, I was in my own little zone now. Reaching the flat section I could see a couple of girls in front of me including fellow smiley club member Amanda. Passing a couple of other team girls I made my way to Amanda who looked like she was running effortlessly. It seemed ages until I caught her up. With words of encouragement from both sides we wished each other luck and I went on my merry way. Just after a mile or so I heard heavy breathing and superspeedy Gareth came hurtling past at sub 5 minute mile, leaving me to weep with envy.

A course never quite looks the same way twice. The combinations of weather, season, light, feelings and thoughts that you find there are ever-changing. – Joe Henderson

I didn’t feel that much weaker on the second lap. Less runners to target but still enough strength in my legs and head to get myself round. Another cheer as I went round the dam wall and back up the ‘hill’.

A couple more targets came in sight, two other girls, who I passsed and we sent on our best wishes to each other. Just still behind another fellow club runner I was determind to finish this in a suitable state, oblivious to time but just overcoming that nemesis of a couple of years ago when I almost walked up ‘the hill’ (and down it). At the top I got a shout out ‘ you know the course now’ as I powered on down and round feeling stronger as I went on. The run down this time felt much more in control, and faster. I wouldn’t know until I checked the watch later but it felt better and more powerful.

Back on the straight and running on my own, I somewhat I did my best to put in as much power as I could to finish. My aim was to finish without collapsing on the ground, wheezing or feeling dreadful and I can say that I finished with a smile on my face still feeling strong enough for a 4 or 5 mile bike ride back home.

The Club picked up a number of medals and wine or beer on the night, but most of all well done to everyone for just turning out enjoying it and having fun. It was great to see new club members having a go at the course, not an easy one with ‘the hill’ in full force but we all completed and fought the road, and that’s what counts.