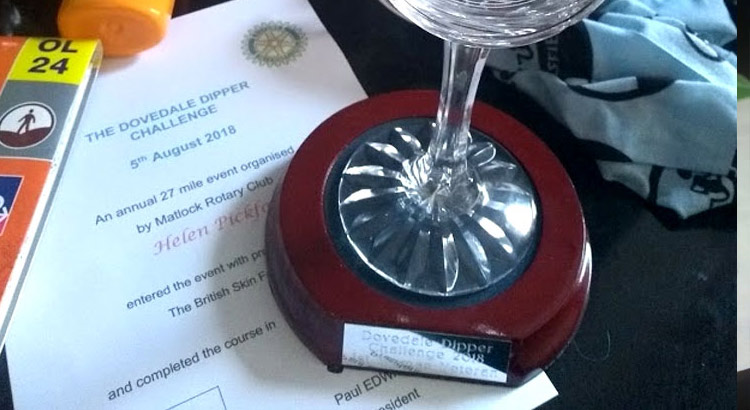 After chatting to the lovely Caroline at the St Begas Ultra back in May she’d mentioned an event called the ‘Dovedale Dipper’ in Dovedale, Derbyshire. I quite fancied it, being a (non) LDWA Challenge event it was 27ish miles or 14ish miles for the ‘half’ of beautiful trails across the limestone ravines and up and down a few 1000ft of hills – around 3000ft to be exact.

Being a ‘challenge’ event it followed the same pattern as LDWA events, cheap as jacket potatoes (£16 for 27 miles) and cheerful (smiley faces all around, not sure I saw many smiley paces though). The maps were on the website so I spent the evening before downloading them alongside the ‘instructions’ about turning L at a tree and R at the stile and puff ‘up the hill’ and ‘fly down the next hill’.

The event attracts walkers on both the 27 mile and 14 mile routes as well as runners, for this reason, there are all sorts of runners and walkers doing the event which makes it even more friendly.

With a 10am start, the sun was already high in the sky and the temperatures were already soaring. I made sure I had plenty of water however with checkpoints every 4 or 5 miles there was no need to carry 4 litres. Nothing fancy just a piece of paper with the checkpoints written on in little boxes and a stampy thing to prove we’d gone through the checkpoints – simple really. And I like simple.

I wish I was less fit,
No one ever said.

The route started off going down a tarmac lane and then onto rougher ground, the male runners sprinted off way in front – rather fast soon to be tiny dots on the landscape. Over farmland, it went, (beware of the dog) and up a banking to the High Peak Trail. Myself and another girl called Eleanor were playing frog leap with each other. She would often take the lead on the flat sections, especially on the High Peak Trail. I used her as a marker to keep my pace and challenge myself a little from the norm of being lazy due to the flatness of the land. We arrived at CP one almost together. I was surprised already how well marked the course was. Of course, you still needed your map with you but at the ‘main’ junctions little DD signs had been established.

Soon out of the flat ‘high peak trail’ we were still playing froggy with each other across to Hurdlow. At the downhill road section Eleanor belted it down whilst I joined a couple of other guys, one who I found out lives a few streets up from me. I was quite happy running with the two other guys chatting away about life, running stuff and other runners that we knew including the rather infamous ‘tutu Mike’ whilst heading into the next checkpoint at Lonnor. The checkpoints were really well stocked for this sort of event, biscuits and flapjack and plenty of juice and water. I certainly didn’t expect flapjack and stuff like that. I’d already got my own fuel and a couple of gels that I don’t normally take but because of the heat I thought I’d give gels a go rather than proper food alongside the tailwind mix in my bottles. I didn’t really feel like scoffing proper food. Unlike me.

We rejoined Eleanor as she was battling with some cows on the Riverside Trail. Not very muddy today as the ground was limestone dry. A few of us were now running together chatting and watching the fields go by. Up a randomly steep-ish hill I was a little confused with the GPX being off track but I was well informed we were on the route so no need to get the maps out. Never trust the GPX 100% it’s there just for a guide. I was feeling relaxed and happy, no pressure, just simply running with a great bunch of people.

I love my sport. Not just because I love to run. I love it because of the kindness, generosity, and human spirit I meet along the way

Onto the next checkpoint, I took on some cake then set off again feeling quite good, navigating through the dry reeds and debating which ‘gate’ we should take. Onto the village of ‘Warslow’ and then flying through to the checkpoint of Wetton. Here the two routes merged, I got clarification on which way to go and then left the others to plough on up the grassy hills. I was feeling the real love for the surroundings now – on my own merry way, running around the fields and onward to the next checkpoint at Castern where there were buckets of water for us to dip our caps and buffs into. Only around 7 miles left. Myself and Eleanor were once again bunny hopping with each other, we caught up with two other guys and had a chat about more random stuff as we walked up the next hill. The sun was still beating down on us, attacking our ability to go at any speed faster than a slug with sunstroke.

##The road section towards the final checkpoint at Milldale was a little flat for my liking, and I began to fade as Eleanor picked up the pace and scampered onward leaving me to dig my heels in deep. I wasn’t particularly being ‘competitive’ as this was in my eyes just for fun but it was good to have someone to ‘play with’ and I think we kept each other going. We had nearly popped into neighbouring Staffordshire as the sign was just at the other side of the road.#

Four of us arrived at the final checkpoint at Milldale. I just fuelled up with more water and walked out of the checkpoint. The Sun was burning down deep into my skin, it was hot and exposed. Day walkers cheered us on. The two guys took the lead as they strided out 5km or so of flat but rough limestoney trail. Although pretty this sort of flat trail running bores me a little and the exposure of the sun was now doing my head in – literally. Eleanor was hot on my heals as we continued to frog leap each other once again bracing our cores and bracing ourselves for the final incline.

Hills don’t go away, they wait.

A couple of final little climbs before the finish awaited. By this time the two guys had taken a considerable lead, with one being from Cambridge he must have played the 5km flat to his advantage. I wasn’t about to chase them. Pointless. So I waited for Eleanor to catch me up, as she’d dropped pace up the gritty hill. There seemed no point in racing on ahead especially as we’d spent the majority of the event having fun playing catch with each other. So I stuck with her to chat a bit more about running and running and running and well probably running. We hit the road together and picked up pace for the final mile, trotting alongside each other right into the finish.

A gentle reminder, Running belongs to no one and to everyone.

A cracking event, cracking route, cracking weather greeted by a cracking jacket potato and tea and biscuits and fruit. Whilst scoffing down my jacket potato I met a guy who kindly commented on my blog postings and we talked about.. you guessed it… running!

Because myself and Eleanor came in at the the same time, (its very relaxed and only to the minute, no one is counting seconds with things like this) we were told we were ‘first females’ . There was a ‘little problem’ said the organiser. But there wasn’t because I am an old git. The old git got awarded the ‘old git’ glasswear (V40) and Eleanor got the ‘young git’ glasswear. I was presently surprised that there was even a trophy given out for this low key event. However….

After looking at the results a few days later for 2018, it does look like another girl came 2nd overall – so if that is true then I will happily hand back my lovely little glass to said person. However we spotted no other female infront of us and the organisers at the end awarded our trophies for being the ‘first females’ back, so I am not sure whether we were indeed first or second or whether a male participant took the bib number instead? Who knows. Regardless of that it was a cracking event, cracking route and cracking jacket potato and there was no intention to ‘win’ any sort of glasswear in the first place it was simply a fun day out in an area I’d not run before. It was just a fun day out with a cracking jacket potato at the end.

I am going to classify this as an ‘ultra’ despite it being 27 miles (An Ultra is technically defined as anything over 26.2 miles) however I appreciate that it is only just over that ‘marathon’ benchmark so if anyone is offended by  my classification please smile, drink a cup of tea, do 5 minutes of meditation and then eat a jacket potato.