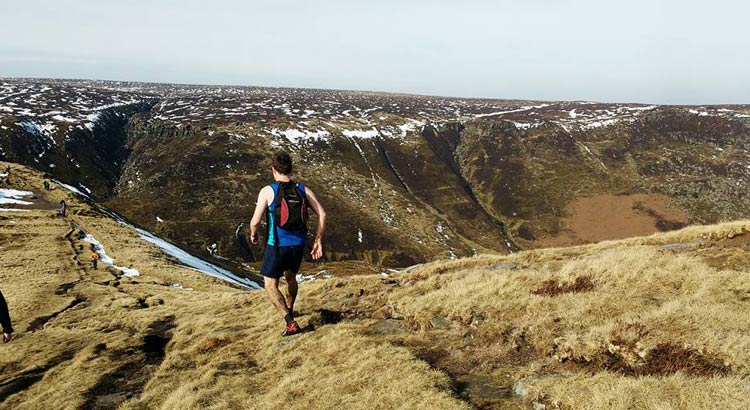 Run with no expectations. Just run.

So Grindleford went well – cracking the sub 3 hour barrier and bagging 2nd Female (1st FV40). The legs were ok when I awoke on the Sunday morning and I was ready to brave the Skyline route. Forecast was nothing like the previous year of minus stupid degrees on top of Kinder, more so blue skies stretched right across the hazy looking Peak District as I drove the 20 minutes or so to Edale.

Edale was buzzing with fell runners as I arrived. This was an event to be taken seriously with full FRA checks. Map, compass, gloves, hat, waterproof top and waterproof bottoms that I borrowed  from Grindleford Gallops’ Winner Joe Fowler which got scrutinised to the last taped seam by the kit checkers, food in the form of a couple of 9 bars, and some fudge, yes its compulsory kit, plus appropriate footwear. Flip flops anyone? – what did they do with the guy who ran it bare foot last year? – and I passed kit check.

The race starts in a big open wide field with the beaming hills of Kinder reflecting down onto 300 or so runners. There were some well known names in this years’ event, the female line up included the likes of Nicky Spinks (BG record holder), Sally Fawcett (GB trail runner) and winner Jasmin Paris (2nd in Dragons Back 2015). Amongst the starters were also Chris Baynham-Hughes who I had ran some of Ring O Fire with a couple of years ago.

With just a couple of minutes to go we were told not to eat yellow snow for the hills were still full of the snow fall from the previous year. I had come well prepared with sealskinz socks, 3 pairs of gloves, 2 hats and the kitchen sink strapped to my rucksack. No repeat of last year thank you very much.

I nestled myself around 3/4 the way back happy to just go with the crowds as we climbed the first hill zigzaging towards Ringer Roger, probably a 20 minute mile, there is really no point in even running up this bit. It involves quite a bit of scrambling near the top.

Not all runs require a garmin and music. Sometimes it needs to be you and the ground #runningtip

Once it leveled out runners came racing past me, I let quite a few past just happy to be running this enjoying the surroundings and trying to do my best to keep up straight. Down Jaggers Clough, and up the side of the Roman Road onto Win Hill I ran. I got chatting to a guy who had run from New Mills (12 miles) to Edale, doing the race and then running back (another 12 miles) – a full 45 miles in total – with far too much feet of climb you could mention. He told me about some upcoming races and recommended a few for me too. This kept me occupied on the long slog up to Winn Hill. The front runners came rushing down as we plodded up, the three girls Jasmin, Sally and Nicky in the lead. I gave a shout out and a wave to Chris as they went flying down the hill.

To know running is to love running.

Up we scrambled to the dibber and trigg at Winn Hill before embarking on the descent down to the bottom of the valley just outside of Hope in preperation for the climb up Lose Hill. A water stop and a strip off of my merino wool top which I proceeded to drop into a muddy puddle despite the lovely ultra boy holding my rucksack for me whilst I proceeded to strip right down to my bra to sort out my layers. Epic fail but hell no shame here.

The steep climb up Lose Hill is always challenging. Although I have run up this before, today there was no point, and I enjoyed the company of others as I took on a museli bar (9 bars are 4 for 79p at one of the cheap shops at the moment – bargain!) and some water and cheap salty fudge ready for the skyline trail that I really love – Lose Hill over Mam Tor onto Rushup Edge. A beautiful rolling trail with breathtaking views of the skyline and Peak District at its best.

It only takes one step, one mile, one breath, and one smile at a time

I got chatting to another girl, her first skyline event and the chat got us up the flagging flagstone incline to Mam Tor. It was rush hour on Mam Tor as is when a bit of sun comes out. Down to Mam Nick – the last water station (only two en-route) where I re-organised out my rucksack, just in case the weather came down I ensured I had everything to hand. I was also ensuring that I was eating lots unlike last year scoffing down fudge, jelly babies and even more oaty bars. Yum.

Well fuelled to conquor Rushup Edge I caught up with ‘Andy Buck’ a Strider who I had battled the Grindleford Gallop with the previous year. We had a little chat as he asked ‘you didn’t do Grindleford Gallop then yesterday’ er… *runs on*

Because that hill isn’t going to run itself

The big bad bogs of Brown Knoll were looming. Jumping over heather clumps and diving down 3 foot cliff peat troughs. Due to the snow it was wet underfoot with troughs of snow making it hard work. Watching the guys in-front plummeting into the hidden bogs I tried to avoid them myself by taking a slightly different ‘line’ at times. The slightly uphill moorland ascent to Brown Knoll checkpoint was hard work as I passed a few guys, with Andy Buck and a few others just behind me. This section can seep every little bit of energy out of you as you are watching every footstep, jumping over peat infested streams, straggling wide ‘peat rivers’ and just simply peat bashing the soles of those trail shoes.

Running is freedom to be me – Real Runners

Once after dibbing in at Brown Knoll I fought my way through 2 foot snow drifts to scramble onto the paved path. Easy? Yeah right – slipping and sliding everywhere enforced by more snow, ice and peat.

Edale Cross check point was not too far, I dibbed in. It was much more welcoming than the previous year and then a steady climb up again a good chance to eat and drink again. Getting the idea of this? Eat drink and run.

16 miles in I was beginning to feel the effects of the milage in my legs, slowing down as the boys who I had passed on Brown Knoll now catching me up and overtaking me. This section is always a bit random, last year I took a very peaty trough route round up and down, this year I was trying to stick to a non existant path and came across lots of rocks that I wasn’t able to cross. The rock formations are quite amazing but not when you suddenly freeze confronted by a 10 foot drop below. I couldn’t move as I looked on in envy at the guys who jumped from one rock to another with no fear at all. A group of guys caught me up as I stood there frozen not knowing what to do, one of the kind guys felt sorry for me and helped me across. I thanked him profously as I picked myself and my mind up and started back running. Time for something to eat again I think as I stuffed my ’emergency’ gel down me and some more fudge.

Still very boggy I followed the meandering pathway. Then the woman-eating bog struck. With runners infront of me and runners behind me I plummeted into a 3ft woman eating peat-bog stood up and presented mud all the way down my left hand side, from head to toe. Fantastic effort! Would I get a medal for that one?

Happiness is.. fragence of peat bogs

Once I had fought my way out of the peat I lost sight of the other guys and was running on my own again. I did the same pathetic wimp as a waterfall came in sight and again I froze scared of slipping again I got help from a guy who caught me up (thank you!). Patheticness at its best.

I was beginning to feel the fear and tiredness was also setting in by this point, wobbly legs and slightly skewed mind. I was still going though, enjoying the views and the small dots of runners in an array of colours in the distance racing for time. Of course I had time to eat more food and take some more photos.

I was now running on my own, enjoying the peace and peat of the skyline. I turned the corner to find someone nestled in the deep depths of the heather looking a bit delerious. I asked if he was ok, obviously not as his speech was a little slurry. I gave him my water and a salt tablet which I always have on me whether its hot or cold. I asked fellow runners coming through if they had any water but the passing ones just passed without any water. Finally a very kind runner had extra water and we fed him with food until he came round. Once we were sure he was ok we went up to the last check point at Ringing Roger and let them know about the situation. The guy did finish the race in the end which I was pleased to hear.

Don’t get so caught up in your goals that you forget to support your friends.

The final descent down to Edale required some scrambling down the rocks and then a hop skip and jump back down the zig zagged path that I had grunted up some four hours or so earlier. I had no idea about time I was just happy to whizz down the field to the finish line with a big smile on my face to have finished happy, dry and not injured. I finished bottom third, in a time of 4 hrs and 35 minutes – ish, only 5 minutes faster than the previous year. Who cares about the time, I care about the run, the experience and a fantastic day out in the hills. Would I do it again? Certainty for the pie and Hendo’s at the end as well as the ample amount of cake. Did someone say cake?

This video sums it all up from ‘Emer did it’