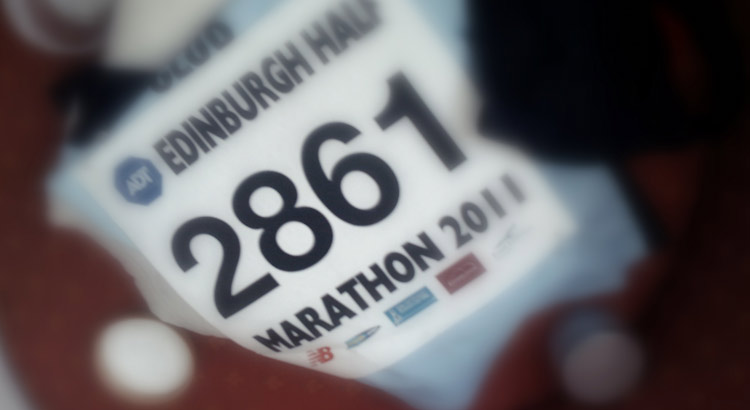 Why do bagpipers run when they play?
They’re trying to get away from the noise.

And that was the sound of the weekend as I exited Waverley Railway Station on Friday afternoon to have a weekend in the gorgeous city of Edinburgh in order to get away from England and to run what I thought was going to be 13.1 miles for the ADT Edinburgh Half Marathon. Yer aff yer heid!

Aye, so a few many Boonie days later I emerged from my bed at 5.45am trying not to wake my friend who was having the average Sunday morning sleep in. The hotel was only 10 minutes walk from the start but I was nervous and jittery and it was an early 9am start. A few mouthfuls of moody muesli at 7.30 because Breakfast didn’t start till 7.30 left me feeling even more nervous, I normally eat hills for Breakfast but this was a flat route so maybe I would be ok? . Should ‘ave ‘ad me haggis forming fry up. Whit’s fur ye’ll no go past ye.

So I walks down to Meadowbank stadium, no meadow and no bank, ok I can deal with this disappointment – honest. No aye Drookit t’day. The sun was shining, so much for the long tights and winter running jacket – oche aye it was shorts and running vest only. Nothing more nothing less.

Organisation at the stadium was really good, the usual issue of not enough toilettes but they weren’t charging which was surprising given this was Scotland. A wee bit of yon wee before starting suited a lot of us. People warming up on the track, Mr person with the mic giving shout outs and attempting to speak Norwegian and Spanish, the warm up girls with shameless plug for some random Gym and the signage of the pens. The stewards were really helpful and friendly – thumbs up to you all.

We were penned by choice and it worked really well, normally penned by honesty ends up being like organising a piss up in a whiskey chamber but cheers to the great honesty of everyone as I opted for the 1.30-1.45 pen. Not a pencil in sight.

And after some random car still on the course we were off, beginning in the stadium it was a slowish start as expected but soon everyone got their pace going and began to spread out, just like butter having been out of the fridge for a day. It would melt. The sun was gleaming even though it was only just past 9am, this was going to be a hot one, a contradiction in itself up in Scotland, I thought Scotland only had two seasons June and Rain.

The world is divided into two kinds of people: runners and non-runners. –
Marc Bloom, The Runner’s Bibles

The course took us down to the coast and the mast of runners followed it through right through Craigentinny, McSmellyfishport and Portobello (no market as we weren’t in London folks). The scenery was as picturesque as running on the coast of Scotland, gorgeous. Support along the way was plentiful, the kids playing high five, shooting us all with the water guns, the two shout outs for me “Go Sheffield” across the bridge and near the end, so it was worth wearing my club vest after all as I gave them both a wave.I know you I do, I do know you.

By 6 miles or 10km we had reached Musselburgh, the racecourse, the finish ha! wishful thinking. Support was coming in thick and fast and yes right in the midst of support I dropped my gel, (rubbish gel not having that again). The route then took us out onto the road towards Prestonpans and round the pots, and cones that had been moved 300m or 500m or so just as a late April fools to all the runners and back around, no time to stop off to do the washing before ploughing back along the same route on the other side of the road waving at the runners coming forth for the April fools extra distance. So what’s nearly 500m anyway? It’s about 0.5k isn’t it?

There’s a secret, a secret that every runner knows. I start at point ‘A.’ I end at point ‘A.’ And somewhere in between point ‘A’ and point ‘A’ is where I find … the point! – Amy Kidder-Hayes

By near on 10 miles my phone told me I had run it in 1.13, yet the 10 mile marker hadn’t appeared, my phone must have dropped out, I accepted that and zoned out to continue my race. Am pure done in you know I know, and I am only at 12 miles. Just one more mile. I always have just one more mile in me. Failing means yer playin! Get a grip, Sic as ye gie, sic wull ye get. You’ll get out of life as much as you put in, go girl. And anyway run easy is an oxymoron.

Yet as I approached the racecourse I saw a car, no ordinary car, oh no, this was a car with a clock on and a car with a clock on can only mean 1 thing: finish, but oh no not in Scotland, a double April fools as the car with the clock was a car with a clock and not a car with a clock and a finish line. There was 500m or so to go to the real finish line. But because my mind saw clock and car and the clock said 138 something I bombed it to the car, sprinting for 100m only to find out I had to go that extra 500m or so – my legs had done the sprint, they had done it, I had just seriously lost it by this time despite my second shout out to “Go Sheffield”, maybe I looked that exhausted? However I did manage to plod the last 480 metres and run the last 20 metres overtaking one guy just at the end to reach the real finish.

So woopie I had run what I thought was a half marathon even though my phone apps were telling me I had run 13.4 miles I just assumed that my apps were wrong until I heard rumours on the bus that the distance was in fact 13.4 miles and this was confirmed the following day.

So although I was 2 seconds slower than my half marathon pb actually I was faster as I had just run 13.4 miles not 13.1 miles, so I feel great!

The race was really well organised, a great technical tee. Nice goodie bag and friendly people at the finish to hand out water, drinks, medals and goodie bags as well as helping off with the chips. A great morning of 13.4 running.