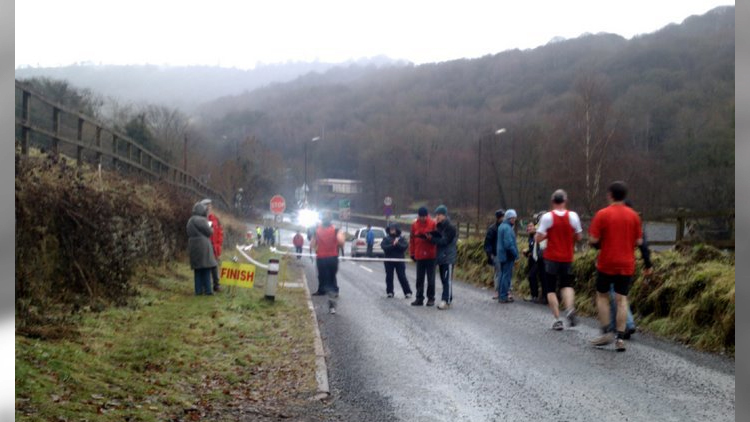 What would you do on New Years Day? Would you be suffering from a hangover from the previous evening or would you join a hundred runners in the middle of Derbyshire for a 5 miles Hangover road race in Whatstandwell near to Belper. Of course you would.

The new year welcomed in some damp, drizzly miserable weather, damp fog, drizzly raindrops and miserable cold temperatures – actually it was quite warm 4 degrees compared to the minus 14 the UK had just witnessed over the past month.

Supporting t-shirt, hat and long tights I met my friend Becky at the pub where the event was to be held. A complete bargain at only £4, what more could any runner ask for?

Little did we know that the route consisted of 3 miles of hills. Now we are not just talking gentle elevations here, neither are we talking little hills, we are talking on par with the Sheffield hills and we didn’t even get a starting breather as the first hill was indeed right at the start.

Within 500m my hat came off as I strided up the hill with all the other runners. I was pacing a guy supporting a t-shirt “Another run with David”, and a very heavy breather, but that was fine, as the weather wasn’t.

So it was upwards and upwards as the hill seemed to never end. It’s a hill people get over it! Literally. And look a little bit of undulating relief as a short decline welcomed us. But not for long as more hills towered above us.

Round a lovely little village and up some more country lanes, this reminded me of training around the Lodge Moor area of Sheffield, beautiful and hilly. Even a couple of dog walkers were clapping us on.

Honey en route was only £3 yes really but I didn’t have time to stop to get any as I ploughed on up Bury Hill and down Chapel Hill as the runners had now began to descend. Seat belts on people.

If the hill has its own name, then it’s probably a pretty tough hill – Marty Stern

Running downhill is thought to be easy however there is only so fast that you can go before you have to put on the breaks. David (from Running with David) had told us prior to the race that the fastest person had done the first mile in 6.30 and the last mile in 4.30. I wasn’t to break any records but I did accelerate down hill somewhat as I actually overtook someone.

Now with my training in Sheffield I often find myself overtaking people going up hill and I walk backwards downhill, and this was no different as 3 professional looking male runners strided past me in the fast lane down that hill. But yes I got speed up and wizzed past one guy, I felt alive and free and what a way to spend New Years Day 2011. A fantastic route, ever heard of a hilly route? Challenging but absolutely brilliant. I wasn’t expecting a great time for this, however results came in and I was 6 seconds off my Personal Best 5miler. Bargain!

Happy New Year to Running with David and everyone else in Whatstandwell on New Years Day 2011.

Running with David Photos and results