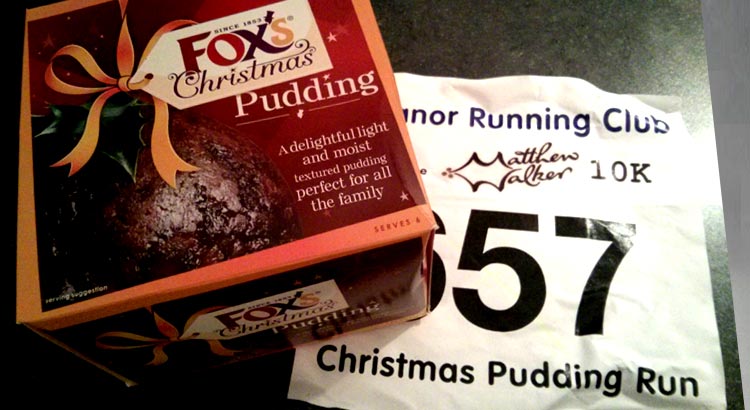 This was my third Heanor Christmas Pudding run, having only decided to do it 6 days previous after managing to complete a 9 mile fell race I was sure I had it in me to run a 10km. I said ‘run a 10km’ not ‘PB on a 10km’. I entered because Becky my lovely inspiring friend from Derby was doing it and it is a lovely route having done this race twice before in 2011 and 2010 and really enjoyed it being handed a full size christmas pud after the race. It gives Percy Pud a run for its money.

So down and up we went to Shipley Country Park the start of the run. It was swarming with running hats, gloves and full length trousers. Of course everyone had tops on too. Numbers were to be collected on the day, so the queues for the numbers were longer than for the toilets which meant the race had to be postponded for 10 minutes. This gave me a breather though as I was flapping already.

Either you run the day or the day runs you. –
Jim Rohn

I had little expectations for this race my first 10km in almost a year. I knew I was much slower than in 2010 and 2011 so I wasn’t going to make any excuses or beat myself up about how rubbish I was. I have only been back running 3 weeks after being out with a stress fracture on the foot for three months and before that Ultra training so I was bound to be slower and this I accepted. It was about seeing what I could do with x2 parkruns behind me in around 22.30.

My own theory says that I am faster on 10km’s that 5kms because I do not have one little fast twitch muscle in my body. Boom excuse number one. So I was secretly hoping for a sub 40 minute. Oh yes I was going to so PB on this route. Are you ready? Liar. I was secretly hoping for a sub 45 minute 10km but wasn’t going to beat myself up or make excuses if I didn’t. Just run, simply run, Its just so simple and it’s only a time, only a clock. Forget it and enjoy the run.

Begin at the beginning and go on till you come to the end; then stop. – Lewis Carroll

And we were off around the industrial estate looping around twice – just over 2km. I really refused to look at the watch as it really didn’t matter about time. The first 2km felt ok. I felt a bit heavy not bounding as I used to bound, feeling clunky for no reason apart from lack of running fitness. I can swim 10km but can I run 10km? Yes I can. We soon hit the main road where I remember there to be a hill. However the hill came naturally and I found myself overtaking a few of the guys who had gone out too fast.

The course takes the road through the village of smallley, smilley for the quiant village of smalley quite nicely thank you very much. Right up and beyond 5km. At 5km I had a sneak peak at my watch and it flashed up around 22 minutes. That was good although I was already flagging. My breathing was heavy as I took on the trail, hoping to feel a bit better as I moved to the off road trail. However I began to really flag, really loose it and people began to slowly overtake me. It is rude to count people as you pass them and I guess it is also rude to count people as they pass you. I was suffering, I was slowing right down. My fitness showed. I felt like I didn’t know what I was doing. My breath was hard. But I continued, I battled through. I will not be stopped.

Don’t let fatigue make a coward of you – Steve Prefontaine

Around 8km the next hill emerged. This hill I have done a few times, not just on this course but on the 10 mile ‘double or Quit’ race which I actually managed to win some 18 months ago and PB. Did I say PB – yes I PB’ed on a 10 mile off road course, of course, its just a cause of being fit or unfit or whatever. People were now passing me, the frustration showed like when you are at a supermarket and the queue next to you moves so much faster than then one you are in. My body hung with shame as more and more people seemed to plough past me. Then hurrah I started running with one of the guys and then overtook at the top of the hill to power down to the last 1km. Back on concrete I put my mindset in order remembering the grusome uphill finish and holding back for that.

Mental will is a muscle that needs exercise, just like the muscles of the body – Lynn Jennings

However when I reached the bottom of the hill my body seemed to go ‘flop’ I felt like I had no strength in my legs as I tried to power up the path to the finish. ‘Keep going you are nearly there’ shouted the marshalls, knowing they were dam right and I was going to finish this thing. This was tough very tough but I was going to do it.

Physically, mentally, emotionally… when you feel like you can’t go on, don’t believe the lie. Dig deep. You’re stronger than you think – Brett & Kate McKay

The top of the hill was in sight but I had no strength for a sprint finish. Perhaps I shouldn’t have done that 10km swim 3 weeks ago and those million and one spin sessions, then I may have had more energy? Or perhaps I am just not quite as fast as I was a few months ago yet I still managed to finish in 44.26.

So this wasn’t anywhere near my 42.something or other from 2 years ago but I was so happy. The word’s PB mean nothing to me, the effort I put into this to get me round means so much more. I know I have a lot more to work on to get me back to strength and power and feel the love of running. I have an upward struggle for a while but I will persevere.

Congratulations to Becky who came in at just over 58 minutes not looking one bit exhausted.