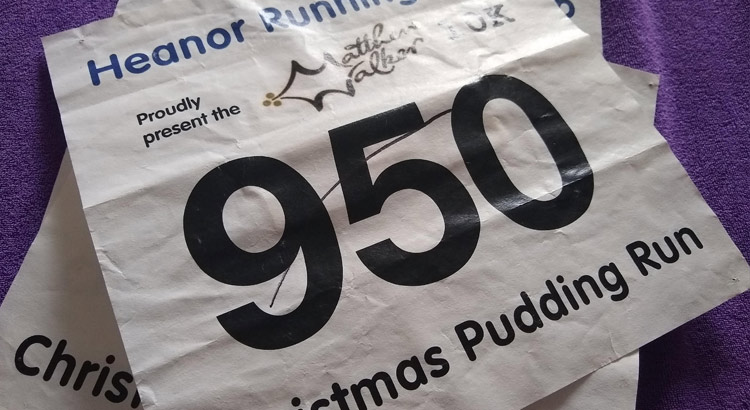 I really love the Heanor Christmas Pudding Run, it always attracts such a variety of runners on a somewhat fast and varied course. It’s not road, it’s not trail, it’s not fell, its a delightful mixture of cake infested fun.

This year for the first time in many the route changed due to landslips on the old course. Seemingly more flat but reality was that it still felt understandingly undulating. I wasn’t sure where I was with my 10kms having not completed a proper one for a couple of years so this would be interestingly challenging, tougher than an Ultra in many ways.

10am all lined up at Shipley Country Park, shivering in the crisp dank November breeze. I am going to pretend its blue skies and sunny even though its 5 degrees and throwing it down. It had been raining all morning, but the clouds stopped crying as the silent gun went off and the fasties sprinted up the roadway, past the car park and round the block. This was initially the same route as previous years, around the industrial estate. I knew from previous years this section would be always ‘fast’. Back round to near the start we all ran. I missed the 2km marker and before I knew it I was on chalk pathway splashing through the muddy puddles up to the 3km marker. Wow that went a bit too quickly for my liking. I felt like I was flying.

I run because it is good for me and I also like to eat. Christmas Pudding.

The route hit a wide gravel trail – part of the old route, before descending down and round the picturesque country park. The ground, waterlogged in places, soggy, leafy. Crunch crunch crunch as 1000’s of feet squished down the disheveled leaves.

Through the woodland we all fought and down a nice hill which I think I ran up on the Double or Quit a few years ago. 4km in and feeling good so far. I hadn’t looked at my watch at this point.

The crowds had soon spread out, and I found myself running with another guy, who was very strong on the hills. 5km in on the paths and I wondered what time I had done in 5km but again refused to look at the watch in case it was just too fast or too slow or fast or slow. Just run my bodily friend just run. I just wanted to run and escape lifes’ problems.

I am not running away from something, I am running towards something.. specifically a big fat 750g Christmas Pudding

Onto a tarmaced section we all ran, a stream of runners fighting with themselves in front and the masses of runners behind. In some cases this section was a relentless drag for the views of the runners and tarmac created a tough mental vision of how far we had all come and how far we had to go. This section was an ‘out and back’. Reaching the ‘turn around’ the 6km marker glared out laughing at us all, making a point that we had 4km to go. Well less than half way anyway.

I began to loose the pace at this point, my breath pounding heavily on my chest, my legs felt like they were going round slower than dirt, too much Christmas pudding? Not yet, keep running for your pudding.

Running a 10km burns a quarter of a Christmas pudding

7km in and the guy I had been running with had made good pace up ahead, I was using him as a marker. Back round the way we ran, the back runners had just made 3-4km markers we were now at around 8-9km. The 8-9km section became a bigger drag, a slightly upwards segment of tarmac, I felt myself slow down, yet others around me were doing the same. ‘6th Female keep going’ someone shouted at me. I could see another girl way in front but it wasn’t worth the battle as I was loosing the power in my whole body.

I drove up the muddy chalky lane to reach the 9km mark, just around 4 minutes left I can push on for my Christmas Pudding. With every bit of energy I had left in my little tank I kept pushing, deep breaths, heavy breathing. A couple of guys hot on my heals over took me at the glowing ‘400m to go’ sign. That last little push always lets me down.

Back round near the cafe and spectators began to cheer loudly as a brass band pumped music around the trail pushing us towards the finish. I could see the arched finish, there it was in all its blue blown up glory. Just that one final push to get to that finish line, it is worth every ounce of the Christmas Pudding I tell you, and as I approached I heard my name and club …’From Sheffield Running Club in 6th Place’ – A big juicy Christmas Pudding Woop!

I shook hands with a fellow runner who came in just behind me (or just in front of me) he apologised for being sick around the 8km mark and mentioned that 10km’s weren’t his distance, he preferred 50kms. I laughed, agreed and said I much prefer 50 milers, having explained I had just completed the Druids Ultra, an 84 miler over 3 days on the Ridgeway a couple of weeks before with probably a greater air of satisfaction. I guess I am just not a PB sort of person?

I run not for PB, PR,course record,s medals, recognition, I run for me (and Christmas pudding)

I had actually PB’ed by around a minute to bring in a chip time of 40.59 but I didn’t feel as elated as I do when I have finished an Ultra. Satisfying I am not sure? I loved the route, beautiful mix of terrain, faultlessly varied; pathways covered in autumnal leaves, crunching beneath every runners feet, muddy puddles to splash into, stony pathways with just a little bit of tarmac to top it off, just like a bit of brandy cream to top of a Christmas Pudding. (I don’t like really like brandy cream but can tolerate a little bit of it – just like tarmac.)

All for a huge 750g Foxs’ Christmas Pudding. Hell why not?