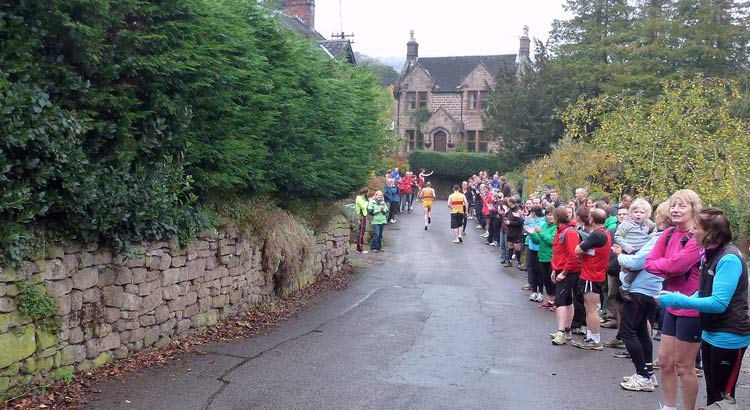 A foggy damp November Sunday descended upon the picturesque Derbyshire town of Matlock, Cromford Mill to be exact, bathing in Matlock bath. No baths for the 16 or so of Sheffield Running Club runners as we took part in this High Peak Relay.

So it was a hill. Get over it. Literally. I positioned myself near the back thinking that I would need to be near the back and off the sprinters went sprinting up the hill. I plodded in my little plodding fashion as the starter cheerers cheered me on with a few bodies just behind me. After the road bit which was short but sweet we meandered onto muddy trail where I started overtaking some of the guys and one girl bit by bit. Just another three girls in front of me and whether I had the strength and love for the hills only time would tell but I didn’t have much time.

Love hills and they will love you back. – Author Unknown

Into the dark woods, the dark dark woods and up and up and up and then straight, and more straight and then up again and I was ready, I was posed to overtake. I didn’t check my mirrors I didn’t signal, but I maneuvered out and over took the girl just approaching the hill and up I went feeling quite strong and enjoying every stride of the hill.

The top of the hill was in sight and the rest was flat, and this is where I struggled, flat? I don’t do flat. Flat does not exist. Not here not in my legs and it showed as one of the guys over took me however I still had enough energy to put in a final sprint and come 2nd female probably only 10s of seconds behind the front girl a young 20 something ‘Landoner’ – makes me feel good being a northerner and a proud Sheffield Running Club member.

The rest of the women’s team did brilliantly bringing home the whole team in 3rd place and winning a lovely little Independent hostel book ready for a weekend training run sometime soon maybe? Less said about the men’s team the better – perhaps?