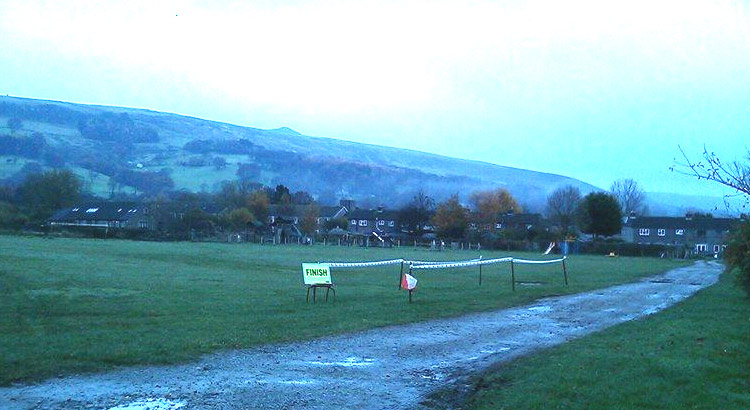 It was an bright autumunal Sunday morning and in the little village of Hope in the Peak District a lovely fell race was about to take place: The 15th Hope Moors & Tors Fell Race. 2 options, the 8.5 mile route with 1500′ of climb. ‘for wimps’ (that I overheard two people saying) or a 20 miler for the hardcore with over 3500′ of climb (wimps). I am afraid to admit that I took the wimps option as I had not run over 6 miles for over 3 months. This was my ‘comeback event’ to fall back in love with off road running, jumping about in the mud, soacking in the friendlyness of the checkpoint people, dibbling in and out of the orange and white kite dibbers, the naturalness of the running. PB’s far from anyones mind, you are not going to get a PB on this route unless you flatten it with a steamroller and concrete over it and I really don’t think the Peak District people would allow that do you?

It’s a treat being a runner, out in the world by yourself with not a soul to make you bad-tempered or tell you what to do. – Alan Sillitoe

The 8.4 miler took in the back of Hope and Castleton before meandering up the back of Cave Dale and round the back of Mam Tor over Hollins Cross and up to Lose Hill and then back down to Hope. A most gorgeous route.

Full kit was compulsory so I was armed with my Raidlite rucksack and all the appropriate kit, including waterproof coat, longs, long top, hat, gloves, nutrition and drink. No skimpy shorts and vest on this run. Not allowed. Disqualified. This was not quite mountain running but contitions ‘up top’ could be cold, wet and dangerously amazing.

The hardcore runners set off at 10am whilst the dregs set off at 10.30am. A lovely marshall came round to dib us in 10 minutes before the start. I met fellow club member Pete who too was running the 8.4. Most of the club guys were fighting for concrete infested PB’s in Leeds or Barnsley today. I was fighting for enjoyment and completion today and that would give me my endorphines.

Obstacles don’t have to stop you. If you run into a wall, don’t turn around and give up. Figure out how to climb it, go through it, or work around it. – Michael Jordan

And we were off. The pace felt fast initially so I hung back. Soon the bottlenecks appeared as we had to jump over stiles and through kissing gates and over dry stone walls. This was bliss already and I was only half a mile in. I was light and dancing through the mud supporting my new inov8 mudclaw (300) great big banana yellow fell shoes that had only been used once before at the Cross Country a week before. My shoes are shinier than your shoes, well thats not exactly something to brag about is it when you are fell racing. Hell no I want them to be muddy. Mud mud mud, dipped in a bit of cow pat for good measure.

After about a mile or so we popped out onto the road in Castleton, boom hello Castleton I know you well. I had map in the back of my rucksack but was able to follow everyone else. I caught up with Pete and we chatted a little bit up Cave Dale which was very very slipping with a big stream running down it. No room for running up here, it was a matter of walking up very carefully. I took the opportunity to take off my coat as it was getting rather warm. Once it leveled out a bit I picked up my pace and started chatting to Pete again about random running stuff, we both decided we weren’t fast enough for the Leeds or Barnsley 10kms so that’s why we were hear enjoying the run, soacking in the beautiful scenary of Castleton and the Hope valley, getting very muddy and chatting at the same time. This my friends is running beautiful.

Once at the top of Cave Dale I picked up the pace again and knocked off a couple of the guys. I felt quite strong, although not going full out I felt in love with the trails. The first dibber approached. Two of us debated which dibber to use as there were two I don’t think it mattered in the end. Time lost? Hell no just a nice conversation. Have a cup of tea and a biscuit too whilst you are at it why not?

Never limit where running can take you. I mean that geographically, spiritually, and of course, physically – Bart Yasso

Across farm tracks and onto a little country lane which then joined to the top of Winnats pass. We crossed over into pure mist. I was very much on my own at this point and had to get the camera out and take a photo of this beautiful running experience. It was just me and midst and the mud running. Runners infront of me I couldn’t see, runners behind me, I couldn’t see, this was mistily bliss. Suddently the next CP came in sight this time manned with water. I took a cup and spoke to the very lovely marshalls before plodding away into the midst. Bliss.

Mam Tor itself was closed due to heather regrowth so we had to take a back way, adding on a little bit of milage. I had never done this path before so waited for the guy behind me who we had previously spoke going up a hill before me taking off in my normal up hill fashion. We ran together for a bit then he flew past me on the down hill section and commented in a very friendly way that I would catch him on the uphill. He was right, I did catch him on the next uphill so I said ‘see you on the downhill’.

Run hard and be nice to people – Author Unknown

We continued this conversation up and down up and down right along the top paths joining Mam Tor and Lose Hill admist dibbing in at Hollins Cross. It made me smile, a warm glow through me thinking how friendly this event was. I overtook a guy who looked like he was struggling a bit and said hi as I powered my way up to the top of Lose Hill. It was so foggy it was impossible to see the top, did I say this was bliss?

Once at the top I turned round, not a runner in sight, Oh that felt so good. I picked my way down Lose Hill but suddenly I heard my name being called ‘Hey Helen’ Pete came bounding past me like a Kangaroo on speed, with the other two guys following. I asked them how they did it. One of them told me to watch strictly come Dancing and once again said ‘see you at the bottom’. I tried to let myself go and power down but didn’t have the agile flexibility and confidence of the guys.

Eventually I hit the road and could see the guys apart from Pete infront of me. Suddenly I got this desire to push myself and ran I did. ‘Well done’ they shouted ‘Dont miss the turning on the right’. Right turn and back on the trails, over stiles and walls and through more fields. I could just see Pete well in front now, no way was I going to catch him but I was on a high, the finish was in sight and I was there, as I put in a sprint, one of the marshalls commented on and hit the finish, dibbing in happy.

Runners don’t do drugs, they make their own… naturally – E. Neil Culbertson

A cup of tea and biscuits were supplied after the event. I had no idea of time or position it was just about completing. This was an amazing event, so relaxing, friendly and real. This is why I run.