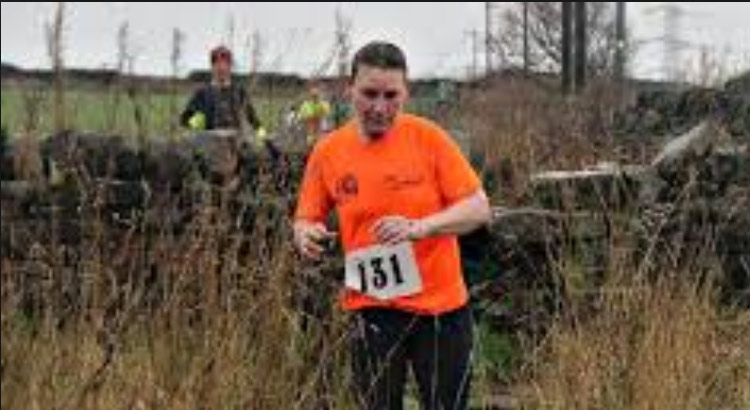 Hunshelf Amble this year was in reverse of last year. Off I went to my first race of the year and my first official race since breaking my leg last August. I just turned up with fellow club member Kate for her first offiical ‘fell/trail’ race and ran.

The race started on the disused railway rather than at the finish as in the previous year. Due to the amount of water the route had been re-routed to avoid the river crossing adding a little extra onto the route. Not that I minded at all.

So off we went at the word go and everyone fired away on the flat surface. No time to get used ot the flatness as it soon meandered down a road and then onto real trail. Lovely, and let the mud fest begin. Soon I began to recognise the route from the previous years. Up some really muddy cow patt fields we all pottered. I was feeling pretty good at this point, powering through the mud and really enjoying myself.

Back onto the road and a couple of speedy guys overtook me but I guess I would be able to chick them with lots of mud later on the hills (and I did).  Into the woods which was beautiful. First down the completely muddy bankings, ample marshalls directing and telling us the way. I was told at this point I was ‘third female’ I will take that thank you very much, and pushed onwards and upwards successfully chicking the guys who had powered on down the tarmac earlier.

Trail running is the answer the question is pretty much irrelevent

I was oblivious to time as I had decided to run this naked. Its not the sort of route you can go and pace yourself on anyway so just get the hell out there and enjoy it, embrace the mud, love the hill climbs and feel the sense of simply running.

Onto the tops with stunning views of Stocksbridge and the surrounding runners led astray by the muddy trails. Infront I could see the two first and second place girls only about a minute or so ahead of me, battling it out together, I was actually quite relieved to be in my third position as I huffed and puffed the trails down.

Its the way you ride the trail that counts

Muddy trails gave way to more muddy fields and at one point I was flying down a muddy field overtaking some of the gentlemen, me overtaking on the downhills, what was going on? My confidence was getting the better of me. The rain was coming down now, refreshing but breezy as myself and surrounding runners hit the last little muddy trail before a mile or so of field after field after field and mud after mud after mud to descend back down to the finish.

There is no app for this

The fields came to an end and all was left was a bit of flatness before heading under the bridge to fire a sprint home to clock in at 1 hr 4 minutes and something or other seconds bagging 3rd overall female only a couple of minutes behind the leading ladies. Rather pleased with that attempt for the new year.