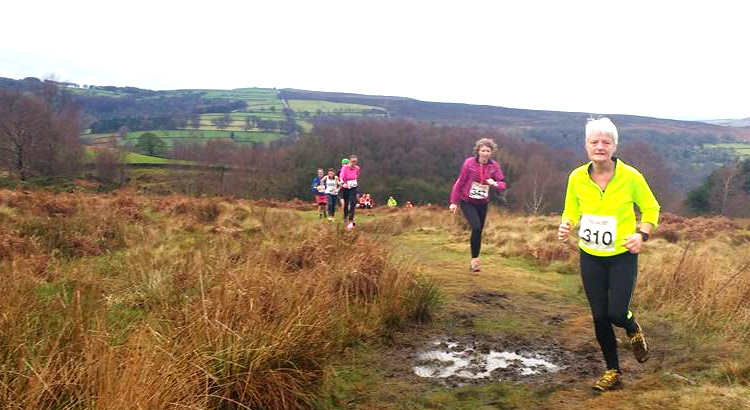 The Longshaw 10km is a two lap trail race set in the National Trust grounds of Longshaw in the heart of the Peak District. People had spoken very highly of the event, (it’s not a race its a free 10km timed trail run) so I wanted to check it out to see what all the fuss was about.

Rather than just race the 10km (now that would just be silly wouldn’t it?) I decided to leave the house at 7am (pitch black), armed with head-torch and run to the event in the dark on the trails – around 8 miles. There at the event would be some of the lovely Sheffield Running Club girls ready to run the trails.

I consider a day without running a crappy day. When I don’t get to run, I am a grump. – Julie Bowen

I was ‘too lazy’ to race it (or just edging on cautiousness due to not overdoing it – not sure which) so decided to run with with the lovely Kate.

After a brief introduction to the race, being warned it would be ‘muddy’ we all set off. The first section through the gates is a little congested but there was plenty of time to spread out as people found their own pace. Myself and Kate chatted as we over took many of those who had started in front of us, enjoying the blissful surroundings and embedding ourselves in the delicious mud.

Parts were muddy grass, parts muddy trail, parts just muddy mud. This was a fantastic trail event. A great route with a number of ups and downs, stiles, gates, little brook crossings, hip hopping over little rocks scattered about and to top it off the course was all marked with little flags and friendly marshalls.

Being a two lap course the head needs to be in the right place to get the pacing on the hillage just right. The first hill beckoned us as some people struggled to dig in deep and splash about in the soggy grass. Upon reaching the marshal at the top the route then took the runners on a straight flattish trail but of course being the Peak District this didn’t last very long and soon an upward motion in the body was required to conquer more muddy upness towards what is aptly named ‘Wooden Pole Carpark’ – for there is indeed a wooden pole. More friendly marshals shouting out words of encouragement as myself and Kate ran chatting most of the way.

Through the ‘start / finish’ area we went to do it all over again. This time the gates bared no congestion, such a pleasure to be running around these trails, with the blue sky shining on our muddy trainers below. By now of course we knew the muddy bits which were not to be avoided. Its all part of the fun.

The first hill on the second lap got a few people as we began to overtake them. Deja Vu as the marshals said hi to us again as we made our way around the course to the finish.

Trail running: The earth under your feet

The finish is slightly downhill, no big blow up archy thingy, no chip timing, no gazibo thingy, no bar code just a plain and simple run to wherever the finish was which we couldn’t really make out but it didnt matter because this is what its all about. Its about not having the bells and whistles but taking you back to simple running, introducing many to trail events, managable, doable trail events with great support and fantastic organisation. What a great idea from the National Trust.

The cafe was busy when we got back to collect our bags (note no bag collection tent it was just a matter of leaving bags in the cafe), probably how the National Trust make these events free, knowing people would buy ample cups of tea and cake. Me for once gave it a miss but I did eye up the beautiful pictures of the Peak District on the wall. Maybe one day when I have a bit of money.

So that was the National Trust 10km – which was actually around 10.5km but really who cares? We enjoyed it and accurate distance is just irrelevant when it comes to this sort of running. I don’t think they are going to get done by any officials for being a bit over 10km, reminds me a bit of the Hardmoors family, 26.2 races and the rest. Welcome to off-road running.

So like running to the event and doing the event wasn’t enough I then decided to run home via Higger Tor, Stanage and Redmires just another half marathon.

2 miles into my run home I faceplanted and scrapped my hands. Little did I know until a few days later that I had bruised my ribs – luckily I think they are not cracked but the Minor Injuries won’t xray anymore so who knows. I’ve made friends with Codine on Facebook yet again. When will I learn? Am I just a running disaster? Stay tuned to find out…