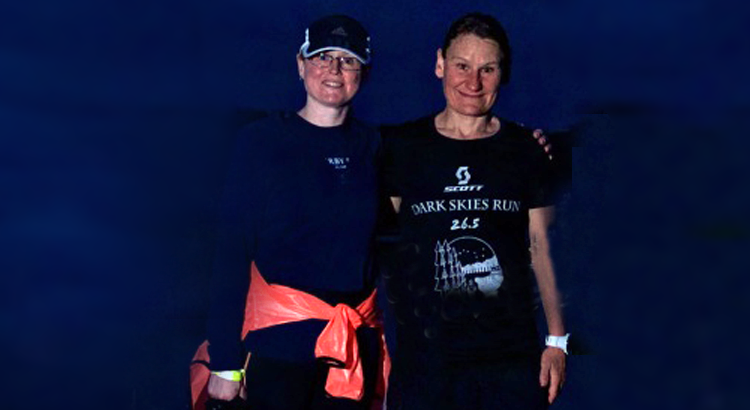 And now for something completly different, well for me anyway. I don’t normally like flat, or running around in circles, but what’s not to like when there is an event on your doorstep for £15 for 12 hours of running including camping and food? Yes its real!  Yes it exists. Bring on ‘Dusk till Dawn’ at Manvers Lakeside, Rotherham.

So I wanted to do ‘something’ with my awesome best friend Becky. Becky is awesome because she is. You see, Becky has terminal lung cancer, but Becky can still run. And she proved the lung cancer she can. This was ‘our’ event. It wasn’t about me, it was all about my lovely best friend. Becky is a runner she ran a half marathon the day before she got formally diagnosed. She’s ran a near on 2 hour half, she used to do Parkrun every week, she still does Parkrun, yes, a healthy runner with Lung Cancer. No rational reason why. That’s why people say life is unfair. But no one deserved cancer. But it’s not the end. Becky is the runner with lung cancer.

One day we won’t be able to do this, today is not that day.

So we headed up to Manvers Boating lake at around 4.30pm for the Dusk till Dawn event. Yes that’s it from Dusk run as many 5km laps as you can around the lake onto the Trans Pennine Trail a little bit as well and back around the lake until you’ve had enough. It would go dark around 10pm. It would rain about midnight and the rest well was up to you.

So we arrived to pitch up a tent and say hi to the Valley Hill Possie who had a lovely little camping area very near to the start / finish area. We had put up the tent a bit further away.

At 6pm we were all ready to go. Really simple – do a lap collect a wrist band go and get a drink and some food from the boathouse and do it all over again, and again and again and again. Yes that simple. Nothing fancy just simply running and having fun.

The best running is running with friends

So off we went. Myself and Becky pottering about 2/3rds of the way back. The route was the same as the 5km I did at the  Manvers Quadrathlon a month or so back – mostly all trail and flat. Defeats my mind but this was fun and cheap and all about spending time with my lovely best friend.

The first lap went really well, we pottered we talked we said hi to the Valley Hill guys as they passed us, and we pottered we talked and said hi to more of the Valley Hill guys as they passed us. Lap 1 done, wrist band collected, and a tick off next to our names. Runners were responsible for their own lap counting, just tally the sheet on the table. Easy. Food and drink already lined up in the boathouse. Being greedy runners we took on some food – I took on a couple of jaffa cakes and off we went again. Lap 2.

All you need is a great friend and a great run

More chatting and saying hi to people. The sun was shining, it was one of those shorts and tee type of evenings. Not a raindrop in sight. Yet! A great little route and great fun. Lap 2 done, wrist band collected, tally marked and food scoffed. Becky was ready for another lap so off we went.

After lap 3 Becky had decided it was time for some proper tea for herself so I went and did another lap and hooked up with another girl from Doncaster for the whole lap. I said my goodbyes at my tent and grabbed my head torch, pocked my head in the tent to see if Becky was there but no Becky. So I went on my merry way to pick up my lap 4 band and run another lap.

Halfway round I saw Becky, ran up to her and gave her a little squeeze. It was getting dusky by now but I didn’t really need my head torch. We walked my 5th lap (Becky’s 4th) back to the tent. By this time Becky had decided to get some sleep I was still ok, so I went running again. I was missing Becky.

3 miles is always better with a friend

On my 6th lap I was still feeling quite ok, a slowish pace but this was just about enjoying the dusky evening. Headtorch was still in the pocket but it was now getting duskier .

The 7th lap required the head torch. It was now dark. It was just me and the trails, a lot of people had temporarily retired and would return to the trails later, some had finished their challenge, to run a marathon or half a  marathon or 5 laps or 6 laps or whatever your chose to run. There was no pressure, you did whatever your body could do it was that simple.

Leg muscles: I am going to start hurting in random places in a minute, ok?

On my 8th lap I grabbed some goodies, which amongst the plethora of picnic food was potatoes, toast, peanut butter, jam, flapjacks, sweets, cake, cake and more cake, and cups of tea, coffee or juice. Did all this really cost us just £15? What a bargain. Just eat your way around.

I Just loved the next lap, just me and my headtorch, just loving it. Fingerlickingly loving it. By now the trails were much emptier not seeing many people at all. I felt still ok by this stage and enjoying the solidarity of the trails and laughter in my head.

How scary would it be if the voice in your head stopped working?

On the 9th lap it was dark and dreary and my legs began to feel like lead. My head torch was dimming. I stopped off at the car to get my spare batteries but alas my batteries were dead. The lesson to be learned; always check spare batteries before anything! I had a cup of tea and some toast at the boathouse but my body was now beginning to go to sleep. One more lap I said. One more lap and then see how you feel. Just one more lap.

I made it out to a 10th lap but the headtorch failed after about a mile. I only had a handheld torch as spare and began to walk in despair. I was losing it. I was dawdling and feel the effects of the last 9 laps. I’d kind of just had enough, and I knew the rain was coming so I was getting in the excuses before the rain came down. Though it was past midnight by now I decided not to be so hard on myself after all this was my first long-distance run back in a long long time and 10 laps is a long long way really. Back at the car on lap 10 I decided to put my head down for a few hours and see how I felt in the later earlier hours of the morning. Then it began to rain. Perfect timing. I slept in the car as I didn’t want to wake my lovely best friend who was fast asleep in the tent.

5am in the morning I woke up still to the patter of rain, probably only having had an hour or so sleeping. My back was killing me being a sciatica sufferer – sleeping on the back seat of a little Corsa is not good for the back.

Morning is not a dwindled dawn

I poked my head in the tent but all was quiet and empty. Becky had gone out for another lap but me my head was spinning and I really couldn’t be bothered. I’d had enough so I went to collect my last wrist band and ‘signed myself out’ with 10 laps under my belt I was happy with that. Just over 32 miles – that’s ok for my first big run in 6 months. I will take that. I received a medal and a certificate to tell me I had done 10 laps and 32 miles. Greeted with tea and toast at 5am in the morning nothing more could have been so welcome.

Finally, I spotted Becky, she’d managed a massive 5 laps, the longest she’d run since being diagnosed 9 months previous. An amazingly brilliant effort. I was so pleased for her, what a fantastic achievement.

What a brilliant event, I seriously can not fault one bit of it, a lapped course, yes maybe out of my ‘comfort zone’ being flat and lapped but hell it was worth it for the fun and laughter we had. For the bargain price of £15 with all the toast you can eat, a medal and certificate these guys at Manvers put some of the big organisations to complete shame. You know what – I may even be back next year – eek!

Relish your body with Hendo’s, or if you don’t like Hendos or don’t know what it is then just relished what your body can do on the day. Appreciate your body, appreciate and love your body for what it can do. We can only do what our bodies will let us do. Appreciate life, appreciate the air we breathe and feeling alive live for the moment and enjoy life.

She can. End of story