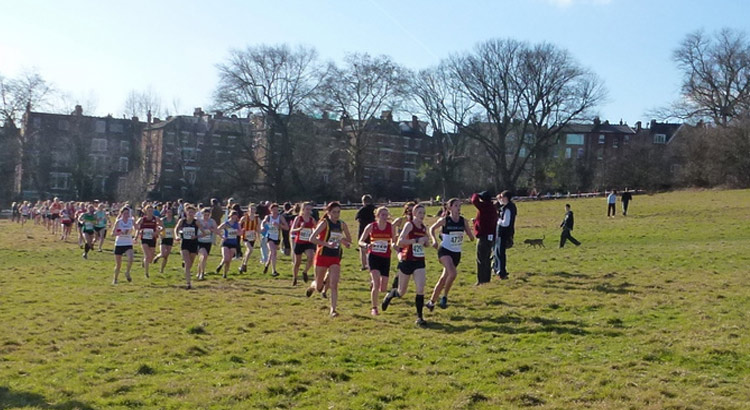 An early start as the club guys piled into a little minibus to jetset down to London, oh it’s luxury this running you know. And what a gorgeous day it was, feeling very spring like when we arrived at Hamstead Heath, the sun had got his hat on, hip hip hip hurray and we had a tent that we put up in 34.67 seconds and photos to provide it on the rather brilliant Sheffield Running Club Website.

The senior woman’s race wasn’t until 2.20pm so we had time to look around the heath and watch some of the juniors as well. It looked a good course, a little complicated but I would just follow everyone else, not like I need a map and compass on this one.

Pen’s – we had pen’s. Not Biro’s but Pen’s a bit like chicken’s in Pen’s. Us three Sheffield Running Club girls from the club took our places in our pen ready for the start and the first hill. Ok it was a hill, maybe not a hill by Sheffield standards but it was a hill. I looked around and felt a little insecure being one of few people without spikes and proper XC shoes, but my trail shoes would do the job for me, they would. I won’t come last I will just run and enjoy. No pressure, I felt good, I was just going to run. People ask why I run in events like this, well what would you do if you heard a gun?

[headline h=”1″]The start of a World Cross Country event is like riding a horse in the middle of a buffalo stampede. It’s a thrill if you keep up, but one slip and you’re nothing but hoof prints – Ed Eyestone

And we were off, 650 women tramping through a heath, kick grass, kick mud, kick up that hill. Come on, kick. I held back letting people shoot off far too fast but soon got my kicking going and strided up the hill focusing on the ground.

Fellow club member (but injured) Clare was just infront of me and sped down the first hill in true style, I held back but caught up with her on the next hill and then again Clare overtook me again on the downhill strongly and very confidently striding down, we were running together for a good 1km, bringing out the best each other, in our heads encouraging each other but not saying anything to each other either, a really good feeling to be running a National with a fellow club member. Team work at its best. Clare escaped from me for a while when we had done the first lap I strengthened up on the next hill, focusing on the ground at the same time. I was zoned out by then, really just focusing on the ground and became oblivious to everything around me. I felt really strong and focused and pushing on in an almost effortless way.

[headline h=”1″]My feet and I have this understanding. I place one in front of the other, and they transport me. Its called running. It throws open the window to my mind and lets the clutter rush out, like so much stale air. I dont know what my mind would do without my feet – J. lloyd

This was my time, no one could reach me, no phone, and every other problem would just have to wait, this was me time, I was in my zone, completley in my zone that apparently I didn’t hear the cow bells, the champagne, the comments, the only thing I heard was Helen. This was the Hel run. By 4 miles in everyone kept shouting “Go Helen, go” and it wasn’t our guys watching and supporting us either. Had all my ex London friends come to watch me secretly? Err no, there were just quite a few Helen’s around me – yes really. Go Helen go, go, go on Helen, come on Helen, push through Helen, did this really make me stronger, Go Helen.

The home straight appraoched as two of us fought for the finish line in true sprint style, the hardest sprint I have ever put in I am sure yet I felt the speed in my head too although I am not a speedy person – little did I know that it was another Helen and although she came officially 245th and I came 246th we both crossed the finish line at 36.02. Another Helen beat us by 2 seconds coming in at 36.00 seconds. It was Helen, Helen and Helen, all in one row on the results list. How biazare. What a Hel of a run.

Well done to Jenny who came top 100, and her great quote describing the course as “disapointingly unmuddy”; Clare still supporting her painful injury yet running superbly and to all the Senior Men too.

A gorgeous day, a fantastic experience, a brilliant event – that’s why I do it, and I didn’t come last, in fact I came in the top 2/5ths and was just outside the first 1/3rd. I still can’t get my head around how strong I felt. I hadn’t felt like that since Heanor 10km last year.

I took some lovely photos on such a lovely day, and there are some great Sheffield Running Club photos too.