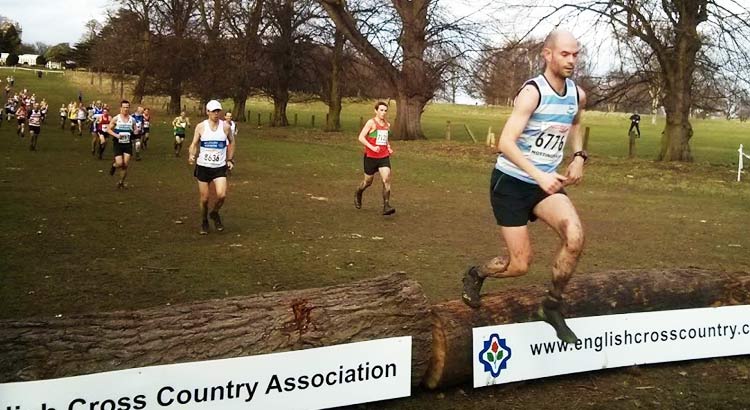 You can’t get better than this – the National Cross Country Championships. This year slightly more local in Nottingham so why not give it a go, 5 miles over cross country terrain running in the biggest cross country pack in the UK, from elites to non-elites – an amazing experience with nearly 8000 runners in total.

A minibus of Sheffield Running Club guys and girls made their way down the motorway to Wollaton Park in Nottingham. It was already very busy when we arrived and the youngsters were fighting their way through the mud. Although it was a dry winters’ morning there were rumours of big puddles of water, streams and a big tree trunk like log in the middle of the course. What was this an obstacle course and we had been fixed up? I hope not!

Make the mind run the body. Never let the body run the mind. That’s what Running is all about – @RunAddicted

Putting the tent up was a challenge and a half as it had really seen better days having been carted to many previous events. Even the high flying lads struggled with its erection.

Some of the club members reccied the course whilst the rest of us got ready. Spike conversations of course made it to the top of the list. In true me style I pulled out my lovely power washed fell shoes and was happy with the result then took a little warm up on my own to get into the mood. A little tired from working hard the previous week, excuse number one – ding in fact its the only excuse I can find. Ding.

Soon it was time for 700 plus senior women to line up. This is the only event where I would find myself racing against the elites such as Gemma Steel who of course won it again some 15 hours quicker than myself, more than likely. So girls lets go and play in the mud and get ’em.

Before I knew it we were off. Some of the faster Sheffield Running Club girls shot off up the hill. I kept a steady pace but wished I had upped my pace as I found myself in a mass of congestion and began to get frustrated at the top of the hill as it felt like I was jogging. Down the other side we went and I was still struggling to get my own space and rhythem and could not see the other girls in sight.

Round the corner and up the hill towards the big manor house we went, only then I found my space and began to stride out in a happy go fashion. Round the bend and down towards ‘the log’. Indeed there was a great big log in the middle of the course, put there by mistake? Hell no, apparently this was the norm on some cross countries. But its a bit false really in the middle of a park. If you want natural go and run up on the moors.

I was running without a watch, not really needed on these events as you can always hear others go off around you as I ran through the first mile, caught up Carolyn who to be fair was injured and then round a very flat bit which I really didn’t enjoy. Pancake day was way off my friends.

Time for some fun as I approached the first stream, nice, quite liked that as I hurtled over that and saw and heard Clare (again injured to be fair to her) shout my name and tell me ‘well done’. Always friendly and supportive is Clare. Onwards and round-wards towards some mud glorious mud, plod plod plod. Spikes; who needs them really as I ploughed through like a tractor with the thickest tyres the best money could buy, overtaking those 20 year old girls frightened of a bit of mud and supporting the latest fashion spikes. Boom. I may be a vet but I like a bit of mud. When You’re Close To The Ground, There’s More Dirt To Be Found

Arrhh- here comes the ‘stream,’ or ‘rather large puddle’ or whatever you want to call it, female eating bog maybe. But hell that won’t stop me as I ploughed through it with full force and headed for the hill. This must be nearly half way round as another lap was in sight.

Second lap, same ground. As I approached the jumping log once again I saw Becky in sight. Becky is an amazing speedy road runner and I have full respect for her going out of her comfort zone and giving cross country a go. Full respect to the girl. Guts. Feeling strong I passed through and kept going running with another girl for a while, ploughing through the stream once again and taking out a few of the girls who had gone out too fast.

The hill, the last hill, the last time, I can do this, I can as I put what I could into the hill. Token minibus driver and supporter ‘Ade’ gave me a shout of approval as I dug in deep to reach the top with 4 or 5 other girls around me. The finish was down hill and I know my weakness is down hill and once again it proved me right as most of the pack got away from me. Why can’t I run downhill what is wrong with me? I had the energy I just don’t have the confidence, gutted. I put what I could into the finish determined not to be beaten by the girl just behind me and finished good.

Heather, Jenny and Sarah had finished way in front of me; however the four of us managed to make a team, coming top 30 out of a good 60 plus teams, not bad for a National effort.

Only 5 miles, but a hefty 5 miles of muddy fun with a few little stingers in the tail. We like that don’t we boys and girls?