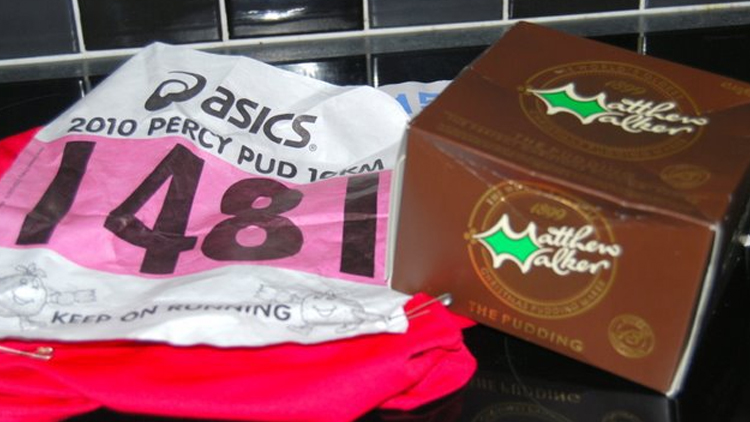 So you smell the pressure, it was on then it was off then it was on again, postponed because Percy had eaten too much pudding and ended up snowed in.

An extra weeks’ training in 2ft of snow, ice and minus 10 temperatures did not fill me with the greatest of confidence and knowing I had another race PB to now beat in addtion to my two previous years’ PB’s on the percy pud route, so I was aiming for a sub 45, I ideally a 44.40 to beat my previous Heanor PB of 44.42 and Percy Pud route of 44.56. Can you still smell that pressure?

Loxley was busy as usual when I arrived, having done my warm up from the very convenient parents’ house to the start I rudolfed the red nosed reindeer’ed around looking for any famililar faces. It was nice to chat before the race to Fabian from the Don Valley gang who was suffering from poorly feet, (not smelly feet unless that was the pressure?)

I dodged the santa’s and christmas puddings and in order to get a good run up the first slope. A little diversion onto the pavement meant I was able to get ahead of some of the those other fancy cakes, mince pies and fancy dresses as I reached the 1km mark. I felt strong as I saw a group of Sheffield Tri Club girls all running next to each other determind to overtake them (sorry girls!) up the hill I went striding away toward Dam Flask. 2km gone and still feeling strong. Conditions were perfect, fresh, not on the for ‘quick sale shelf today’ the only thing on my mind was being quicker than last time.

Vision without action is a daydream. Action without vision is a nightmare.
– Japanese Prover

The 3-4km slightly uphill – a flat but slightly undulating road race this just feels so right, such a perfect morning, a perfect day, a perfect run. I had a couple of running club girls by my side, one who looked very strong indeed although one who seemed glued to her watch – the time is running away, catch it if you can.

Around 4km Santa made an appearance on the other side of the road, as the lead runner came by, there was no clock on the car (well I didn’t see it anyway) so I had no idea of time) but gave Santa a wave and saw the concentration of the first runners, just running, just concentrating, just do it, I wish I could run like that.

Then I began counting the females coming past until I got dizzy, I am supposed to be running 4-5km not counting to 4 or 5, (or was that 45?). So instead I poughed onto the Plough Inn and the “tight bend” – marking the half way mark. No water on this route but that was ok as I strided on up the slight uphill for about 1km lossing thought and passing a few people who were flagging, but at the same time looking for familiar faces passing on the other side. A “go Helen” shout out from Bob and a friendly wave back gave me the extra boost to stride on for my Christmas Pudding. I had 44.40 in my head, faster, stronger, come on you can do it.

It was the first time in a race I had worn long “tights” and a hat, the hat just had to come off at 6km but the trousers remained on, just a t shirt was a good idea too. Happy with race gear today. Trainers doing me prowd and knee behaving. Gold star for the knee.

I was playing Yo Yo with another Tri Club member, a guy this time around, first he infront of me then me infront of him making a great pace maker, which we thanked each other for at the end of the race. The girl obsessed with the time was still convinced time was running away from her and by staring at her watch she would run faster, I hated to say anything so I didn’t instead I strided past, unknown about the time myself, but wasn’t it time just to forget about the time? how time flys when you are having fun.

Back around the Dam the road goes up steep down steep up steep then flattish (for Sheffield) – the first hill went well, the downhill was tough but the up hill was even tougher as I could feel my breathing getting deeper and trying to get my oxygen into my body, swearing at myself for a couple of times a little strong than Dam and thinking of more than a flask of tea at this time thinking of a sub 45 and pushing deeper and deeper.

I found myself almost running on my own around 8-9km, as the photographer focused in on me and I managed to give a very ‘I am shattered’ type of runners’ grin, but I am going to look at the camera anyway because otherwise I will look even more shattered type grin’. Smile for the last mile.

The cheeky chappy at 9km was there once again, pointing to the 9km sign in a “haa haa you still have 1km to go” knowing the runners could see the finish as well – this last 1km being quite painful, 500m or so slight downhill but the remainder a slight uphill needing a big burst of energy. I pushed on down feeling my body slow, but then finding that little extra bit of energy to stride up the hill and passing a few people as the supporters thickened and I saw the clock at 43.something, I didn’t care about the something I just kept running, running and running and digging deeper, and breathing deeper, until I stumbled across the finish line in around 44.15.

I found out later my chip time was fish plus 43.58 – I had done a sub 44. What this means to most people is nothing but what this means to me is that I have ended my running year having achieved more than what I wanted to achieve. This is what they call Runners high.

When people ask me why I run, I tell them, there’s not really a reason, it’s just the adrenalin when you start, and the feeling when you cross that finish line, and know that you are a winner no matter what place you got.
– Courtney Parsons