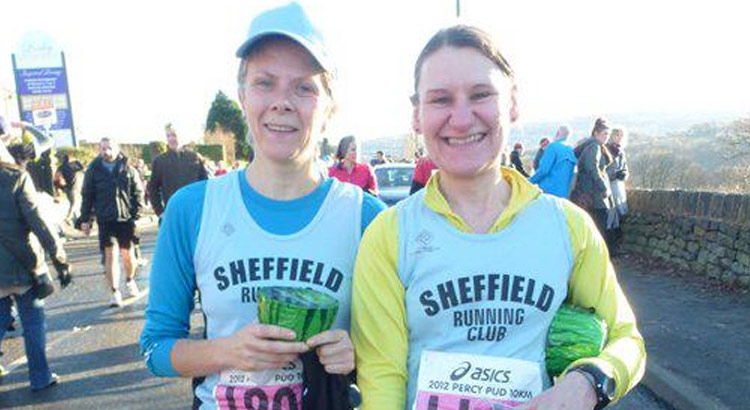 I awoke this morning to a beautiful icy cold frosty winters’ morning for the 20th Anniversary Percy Pud. It certainty beat the previous years’ floods, snow and torrential rain, this was indeed the best weather so far in 5 years..

Oh yes.. 5 years ago.. I was stood on the same start line my first ever ‘Percy Pud’ as a recreational runner with my friend Dan who chased me to just over a 45 minutes 10km, my third ever 10km and the race that spurned me to race more.

The medals don’t mean anything and the glory doesn’t last. It’s all about your happiness. The rewards are going to come, but my happiness is just loving the sport and having fun performing. – Jackie Joyner Kersee (track & field)

So I decided to run around with fellow club member Maria – her first attempt at a 10km road race. Maria just wanted to get round in sub 60 so I promised to get her around in around 9 / 9.30 minute pace – errr *cough* fly in my throat.

With camera in hand and knee all wrapped up, we stood middle pack and jogged to the start line, some 30 seconds or so after the gun had gone and all the top runners had probably already reached Mars and back.

I took on what felt like a gentle jog for the first 1km dodging the ice and watching people around me stride up the first hill. It amazed me how people were out of breath before we had reached the 1km mark. I was already having fun, chatting away to Maria up the hill and taking lots of photos. The sun was shining the sky was a perfect blue, the air was frosty, the world was a beautiful day today. Repeat after me; the world is a beautiful place. We are lucky to be here today. Amen.

Some seek the comfort of their therapist’s office, other head to the corner pub and dive into a pint, but I chose running as my therapy – Dean Karnazes

Dave – Sheffield Running Club coach shouted my name at the top of the first hill, I turned round and gave him a massive wave as big as the grin on my face. I was just so pleased to run. Run girls run, run boys run.

I have never classed myself as a great runner although running this today I now realise that I am faster than I maybe realised. We were running around 8.40 minute miles it was an utter most pleasure to be running midpack some club runners some just recreational runners, just running, that’s what its all about.

Around the Dam we went, jogging on, clicking on, holding my camera in my hand and taking photos at any opportunity, Maria pointing out what would make a good photo. Click click click, patter patter patter. I was really enjoying this.

No matter how slow we run, We are still faster than sat on our couch
– Anonymous

At around 3.5 miles out came the lead vehicle as it was an out and back route, normally at this stage I am around 4 or 4.5km, today we were around 3.5km. Maria still had a big smile on her face looked strong as I proceeded to take photos of the lead vehicle and leading pack. Some of our runners came through, we cheered them all on, taking pictures at the same time. This was amazing, to watch our club perform so well at the same time as running the race myself and taking photos. This is running, I run because I can run it doesn’t matter how fast or how slow. 1700 runners were here today to do exactly the same thing, no matter how fast or how slow every one of them reached their goals in their own rights, and thats what I found out about running like this today.

Nearly at the half way mark, Maria’s intelligent quote “at the end when we turn round are we half way” – doh! And round we went. I was still taking photos, of what I do not know, however I was still grinning cheering on those still behind us, and looking in front as Natalie and Sara from the club came past us chatting away. I must mention ‘personal trainer Natalie’ here – a great inspiration to anyone, not only has she taught spin 20 times a week, today ran a PB at the same time as giving utter most support to Sara; “Your PB for today is not to Puke”

And off they went as myself and Maria trotted behind enjoying and admiring the fantastic atmosphere. Today this was not about me, my speed and my inner selfishness which runners I will admit hold, but about everyone around me, about running alongside a fellow club member, about enjoying the stunning scenery and all the friendly runners. We had support from our long standing members’ Nick, Mike and Dave along the way, with big grins and waves to them all. I was loving this, feeling so relaxed and appreciative of my ability to run in my previous life (my previous life being just three weeks ago) and my ability to run in my future life (my future life coming up).

If you run, you are a runner. It doesn’t matter how fast or how far. It doesn’t matter if today is your first day or if you’ve been running for twenty years. There is no test to pass, no license to earn, no membership card to get. You just run. – John Bingham

Approaching the last 1km I took a few more pictures and told Maria to keep going, spurted those infamous words of anyone “it’s not far now” – but I was honest, it wasn’t far now, and half down hill too. I was being honest as I took a sneak peek at the watch showing 47 minutes. We were supposed to be running under 1 hour yet we were almost on for a sub 50.

Maria put in a big sprint right near the end, I gave my camera one last click as I approached the finish line for both of us to come in just under 51 minutes. Maria in true race style beating me by 1 second; oh just like my first ever Percy Pud where my friend beat me by 1 second. Just like the Sheffield Half Marathon the other year – beaten by 1 second! And I am so sure it has happened since too. Everyone has to beat me by 1 second – it is now tradition! Give it a go sometime, I really don’t mind one bit – in fact it makes me laugh!

In running, it doesn’t matter whether you come in first, in the middle of the pack, or last. You can say, ‘I have finished.’ There is a lot of satisfaction in that. – Fred Lebow

I would recommend any faster runners to take a race one day mid or back pack and run with someone else who wants to PB, get them round get them to achieve their goals, run with other people where you can chat, take photos and soak in the amazing ability of everyone around you. I will admit I didn’t get that self (almost selfish) satisfying buzz out of my own achievement, because I didn’t achieve per se myself but I got something very different out of it today, seeing others achieve, enjoying and supporting everyone, and I still walked away with what every other runner walked away with, a gorgeous sunny 10km under my belt, a Christmas Pudding and a fantastic Silver Anniversary T shirt. There are no other excuses. Just Run.

Now, I am going to mend myself and get stronger to enjoy my running life next year. Thanks guys. Onwards and upwards.