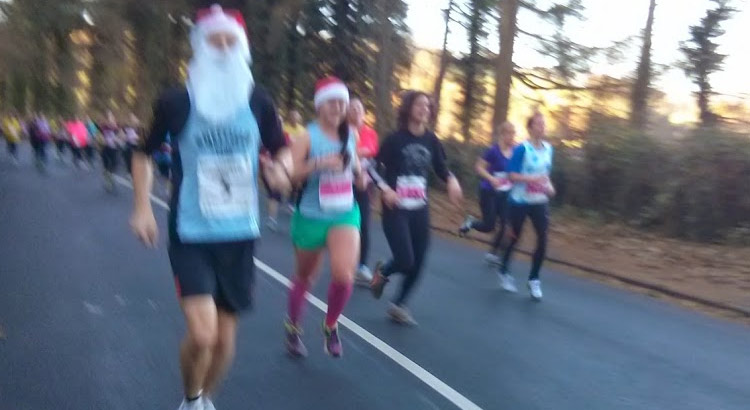 Once again the Percy Pud had arrived. I gave my PB to Mr Percy Pud x2 years ago and since then never got anywhere near it. Last year I got my PW (personal worse) but had such a fun time pacing a friend around the course. This year I was aiming to enjoy as much as possible armed with a 7 mile run before hand and a rucksack supporting a laptop due to being ‘on call’ at work. “you are really running round with a laptop” yes…. it all adds to the fun and this was to be my longest run in three months determined to conquer the exquisite 13.1 miles even if it wasn’t officially in one go.

Over 50 of our club members were running this, surely I could find someone to run round with and have a bit of fun? I didn’t have to wait long to spot the smilist runner in pop (I mean running) Amanda and crazy boy Tom who supported a Santa beard. So we all decided to run together and have a bit of fun.

Today I will run for pure absolute joy! – Pinterest

As we ran up around the Dam the leading car came whizzing down and the first runner a local Hallamshire lad sped past. Our top runners wouldn’t be far behind as Will one of Sheffield Running Clubs’ top runners lead the next pack back round the dam. Close behind where the other faster club runners including a couple of our girls really pushing for their sub 40s. We were cheering them all on as we plodded by singing along and clapping everyone. This is the good thing about an out and back, being able to give the support back; and see the pain on peoples’ faces as they were striven hungry to smash their own goals; amazingly brilliant.

Unfortunately I didn’t know everyone’s name so wasn’t able to give out cheers to all fellow club members, and was probably too busy trying to focus the phone too. Over to the plough inn and that was just about 5km done as runners streamed down and back up and curled around the dam. Amanada took in a Gel and then suddenly off she went with a real spur leaving everyone for dust. About half a mile later we slowed down and did a bit of a dance for fun before getting back into the race and taking it a bit more seriously. Sorry for those around us who were trying to break 55 minutes when we were messing about.

The 7km flew past, 8km and onto the home straight, its only a hill, we can get up this one, easy. At that moment Jamie – friend who I had done London to Cardiff (160 miles in a team of 9) with in the summer came running past chatting away. I told him to stop chatting and get on with it as he picked up speed towards the finish. Out came the phone again to video the finish as some of the more speedy club runners were now by the roadside cheering us all on including a “Go Amanada you are doing really well”, and lots of cheers to everyone near the finish line.

And Finish in under 55 minutes. Another percy pud done and dusted. I can now count my Percy Puds on two hands instead of one. Wooop! And a Merry Christmas to you Mr Percy Pud and a Merry Christmas to me for I had bagged a 7 miler plus a 6.2 miler plus a 1.8 miler making the 15 miles the longest run I had done in three months since breaking a stupid bone in my foot. On the road to recovery at last! Bang so so happy, happier than getting a PB that’s for sure. Onwards and ultra’s.