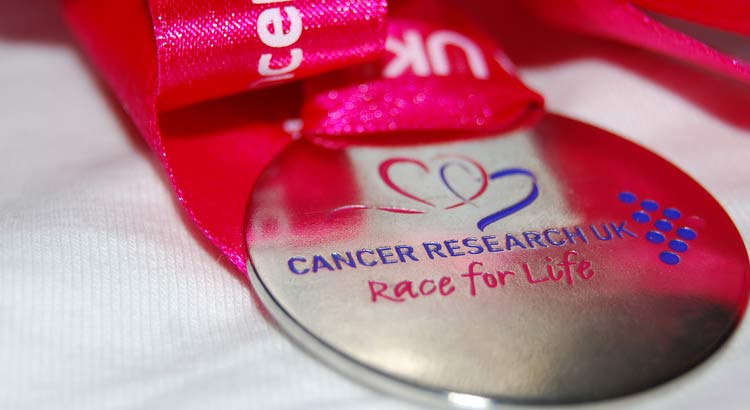 My first ever 5km Race for Life at Sheffield Don Valley Stadium greated me with a sea of mass pinkness. I felt a little left out even though I supported a “Breast Cancer” vest. A very emotional start as videos of heros of thsoe who have battled with this deadly disease flashed on the big screens around the stadium.

Those who were running were allowed to go first so I made my way to the so called “front” which was actually half way back as I was going to run it all. Yet I found out most people around me were walking or jogging so it did take a while to actually get out of the stadium and dodge all the walkers and joggers.

When you get to the end of your rope, tie a knot and hang on. – Theodore Roosevelt

The route took the sea of mass pink around the Don Valley Bowl – a grass based Bowl over the canal and round the backstreets of industrial Sheffield. Two steepish hills presented challenges for all including myself. Around the 4km mark the stadium was back in sight and I thought I was nearly home – yet the route then took us all the way around the back of the stadium before descending back onto the track. The last 500m or so I was running on my own with the heat beating down on my back and as I entered the stadium cheers from spectators gave me that extra boost to run that little bit faster towards the finish line.

I completed the run in just under 25 minutes, armed with bottles of water and Nivia goodies in a purple duffel bag I went home happy and exhausted.