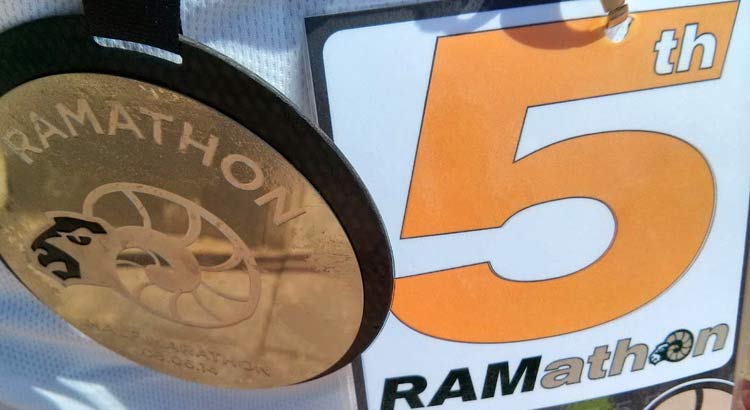 The Ramathon was back after 18 years, Derby’s half marathon. I wasn’t even down to do this race as it was road and I was in the midst of holidayness. However a place came up through a friend of a friend and I snatched it up and seamlessly was able to swap names for the entry with just a 2 pound surcharge.

Of course I was running this as best friend Becky was running too and it was in Elvaston Castle grounds which just sounded bliss.

The morning of the race supported hot sweltering weather. After a week walking in the Yorkshire Dales where it mostly rained the sunshine was a little surprising, a little hot and a little obstructive. There is never good weather for runners is there?

Conditions are never just right. People who delay action until all factors are favourable do nothing. – William Feather

We were late getting to the grounds, but with free parking and a gentle jog to pick up our numbers and dump our bags we made it to the start line with just 10 minutes to spare. The registration was seamless, ample toilets a great atmosphere already and the race hadn’t even started.

I put my race hat on – my Sheffield RC buff and hovered about soaking in the atmosphere and watching some of the guys jumping up and down waving their arms and legs a.k.a a warm up. Soon we were called to make our way to the pens. Our numbers reflected which ‘pen’ we were supposed to go in. I positioned myself in the 1.30–1.40 pen and surrounded by similar numbers I had chosen right. They announced the top 5 fastest female and male runners with their subsequent times but squeezed in that there may be some dark horses in the pack. Not sure about that… I was hoping for between 1.35 and 1.40 that would do me nicely. But we would see what the day would bring.

Get your mind out of the gutter and get your feet on the street! Stop whining and start running.
– Fuel Running

And we were off, round the trails of the castle grounds. Not congested despite the 2000 or so runners. Pacing out with suppporters all around within less than mile we hit the road. Mile 1 sign and a girl next to me shouted ‘we are on target guys keep going’ what did that mean? sub 1.30’s? Maybe but really who cared?

Mile 2 and then onto the carriage way of doom. A mile or so of pathway adjacent to a dual carriage way which supported powerful sun beating down. Even 3 miles in the weather was taking its toll on us all. But we battle through it. Finally the doom turned to dusk and we turned off into pleasant country lanes. I was running with the ‘on target’ girl for around 4 or 5 miles then dropped her and battled on. I could see another woman in-front of me and kept her in sight as much as I could. A friendly half way sign was a good sign. We like good signs.

The were ample amounts of water on route including some energy drink option as well. Given the hot weather more water went over me than in me, and I even took on some of the energy drink to keep fluids up. It was hot and getting hotter. Round the country lanes we went and then back onto the carridge way of doom. This time for almost double the length as I did my best to stride it out. I was running almost solo occasionally passing people but by 9 miles the doom had got to me and I felt myself slow down as a couple of guys powered through me.

Finally the doom was over and we were directed by friendly yellow arrows onto a trail, oh bliss you beautiful trail come and eat me, come and pamper me and give me shade and power to finish. Oh beautiful trail I love you.

10 miles down the footpath a guy overtook me but I grabbed him later on. Back on the road for just half a mile or so and then through the grounds of the castle to more blissful trail where shade awaited. 11 miles in and a final drinks station well positioned and well needed. These last two miles were taking their toll on me but I also found other runners flaking too as we all slowed down meandering through the blissful woodland. The shade was blissful but by this time our bodies had taken the toll of the beating sun. 12 miles – just over a mile to go, that was the longest mile that I have ever done, so it felt like it, round and through the grounds turning every corner, where was the finish? Where oh where?

Round another corner, not here, not there, not anywhere, 800 metres to go, 400 metres to go and power on through. The finish came into sight some 200 metres or so beyond yonder to support a grassy finish. 3 of us pushed through to the finish line just pleased to have finished.

Staggering through the finish area something got thrown round my neck, the medal maybe? I wasn’t sure until the girl said ‘congratulations 5th female’ oh wow blimey hell that’s a bit unexpected, oh ok thanks. Cool, blimey. Nice. The the medal round my neck, a banana in one hand and water in the other. What well organised and friendly people. No medal in a cheap rubbish goodie bag this was what it was about what a runner wants, decent post race grub – bananas do it and water. No advertising leaflets, silly unnecessary accessories just simply what we wanted.

It was a little of a walk back to the baggage area where we were able to pick up our tshirts too. Becky would still be out on the course for another 45 minutes or so, giving me enough time to sort myself out and get a free massage too. This race was just so blooming organised that it puts every other one to shame (including the shocking Sheffield Half Marathon who couldn’t even organise water never mind a piss up in a pub)

Prize giving was at 12.30 – guess I should stay then? I looked out for Becky but we must have missed each other, for the next two hours… so I waited and proudly was presented with not only 3 local beers, a 30 New Balance voucher and a merino top voucher not bad for coming 5th.

2 hours later I found Becky waiting at the car, I was worried she had collapsed in the heat she was worried I had gone and had a fit like a few years ago, but we were both safe and sound both having good races. Not PBness but neither of us were out for that we were out to battle the course and enjoy it. Becky came in at 2.20 just 5 minutes off her PB so she too walked away with a smile especially when I handed over the beers to her.

So bang goes a great half marathon, faultlessly organised, some road some trail, a great route, plenty of water stations everyone well looked after, great surroundings. Loved it. Well recommended.