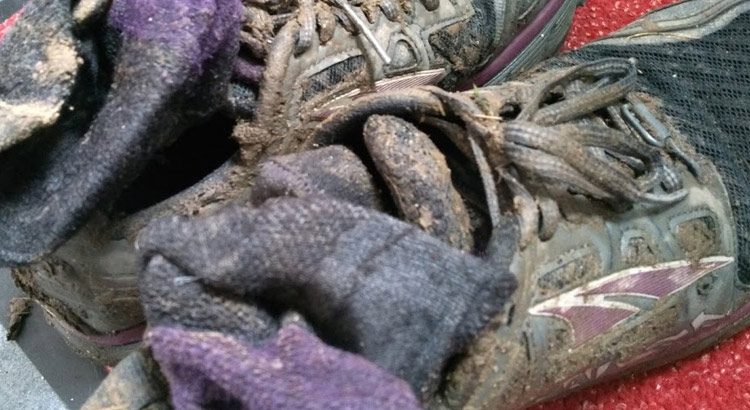 A year ago I had signed up to complete my first 50 miler ‘Round Sheffield Way’ a ‘relay’ organised by Steel City Striders that has been going since 1997 with the Ultra being a soloist event for the first time that year. However 2 weeks before and after reccie’ing every single leg twice, three times, four times and more I caught the dreaded ‘I’ is for Injury which put my foot under a great deal of ‘stress’,  fracturing the ‘metatarsal’ or something like that, putting me back in the swimming pool for a few months. Lesson learned don’t try and be bigger than the event, train smart. Something I didn’t do. Oh how wrong was I?

So with that, alongside knowing I was off the back of an Ultra  – The Ring O’ Fire and was convinced I would still be recovering from that or laid up with the second foot in ‘I’ mode. I decided not to put my name down for the 2014 relay team. Oh how wrong was I?

At the very last minute (literally – 5pm on Saturday evening) I received a text asking if I could step in for another fellow runner with the big ‘I’. It would have been rude not too despite the 5 hours on foot plodding around the Peak District taking what I thought would be the last run ever in my blingy bling Hoka’s. Oh how wrong was I?

A bit of background about the Round Sheffield Event: Each team consists of 10 runners. The course is a 50 mile off-road route around the perimeter of Sheffield. Each of the five 10 mile legs are covered by 2 members of each team

The reason we race isn’t so much to beat each other but to be with each other.  – Christopher McDougall

So 8am Sunday morning teams lined up for the relay. I supported tired legs and what would be the last outing for my dear little Hokas. This time I would be right.

My partner was ‘Debbie’ – fast and furious and she meant business. After a 20 second count down we were off. Straight away Debbie shot off striding very comfortably leaving me and the other teams for dust. Breathlessly I tried to keep up with her. First along the towpath then across the bridge with just half a mile in we had already left the other teams behind. This was a fast fast pace.

Straight on at the canal, Debbie was making good progress, and I was dragging behind. Over the very un-picturesque bridge, we pounded and onto flat road we ran, glancing behind, no one behind us. The first major climb was nettle infested overgrown pathways but had been chopped down somewhat to help us get up the banking.

Debbie waited patiently at the top for me, the mileage in my legs from the day before taking its toll already just some 3 miles in but I would get through this and do my best. In a pairs situation, someone always would be tagging behind especially paired with one of the fastest runners in the club, so I was actually in a happy place even though this felt beyond hard.

Through the next set of woodlands we went, comfortable and bounding, A slight decline made this section pleasurable, amidst the dog walkers and ‘good mornings’ probably wondering what two girls with blue ‘Sheffield Running Club’ vests and number ’12’ pinned to the front were doing bombing along the pathway at that time of morning.

5 miles in, Debbie was fresh as a daisy, I was suffering to keep up but stringing along. Yes it hurt. It hurt a lot.

Through a farm track and up towards a farm we went. It was quite a drag consisting of technical tractor trail tracks, jumping from one side to the other trying to keep a good pattern of running and avoiding the brambles.

If you stumble make it part of the dance

Once at the top and onto the road I was fading badly. Debbie still full of energy jogged on the spot to help me catch up, then onwards and downwards on the road for near on a mile towards Morrisons at Ecclesfield. Even reccie’ing the route a few weeks ago I felt faster – as my legs were weighted with the tarmac and my body was fatiguing, whimpering slowly and painfully.

Through the park we ran, my breathing was not in control I was pushing beyond my limits as to keep up with Debbie. Up the hill I struggled to find any power but focusing on the goal, to get to the finish with Debbie, and give the rest of the team a good head start.

Back onto the trail and through farmers fields, we ran. Over a couple of stiles, we jumped which gave me a bit of a breather but not for long as we were back on an uphill road. I was dropping behind tailgating Debbie from afar. I slowed my pace to the point that I could have been rear-ended by a sleepy slug.

Nearly there, nearly there just a couple more miles I kept telling myself as we made our way up to the main road. I nodded in agreement to anything Debbie was saying to me as she uttered many a word of encouragement to keep me going.

We approached the road to a marshal with a ‘well-done ladies’. Just over a mile to go, negotiating through cut down trees, this section was not runnable, ankle-twisting at its best, technical and brain taxing. Taking it steady to avoid any silly mistakes we picked our way up the hardly existent rabbit path to finally reach a wide chalky trail which would take us up even further. Clear your mind of Can’t girl, clear it right away.

Running is a road to self-awareness and reliance-you can push yourself to extremes and learn the harsh reality of your physical and mental limitations or coast quietly down a solitary path watching the earth spin beneath your feet. – Doris Brown Heritage

Hurting even more but back on a flat breather I ran behind Debbie trying to keep up, just 1km to go, I told myself, it’s not far, as I played mind games with myself, that’s just 1km that’s nothing, just 1km left. We took the little trail up to another road and onto the home stretch.

I gave it all I could to keep up with Debbie, the car park and other runners came in sight as Debbie waiting patiently for me so we could run in step by step together, one of us fresh, one of us extremely knackered. And we did it!

A ‘graceful’ handover to fellow club members Helen and Grace who took over leg two gave them a good head start. I wobbled a little as I grabbed hold of the fence and breathed deeply.  We then got told we had broken the women’s course record – really?

Once I had caught my breath I had my warm down following the leg 2 route back to the car. I found out later that we had broken the course record by near on 4 minutes and the Sheffield Running Club Ladies team won the women’s team overall.

I honestly found running 135 miles a few weeks ago much less painful and much more self-enjoyable than running 9.6 miles really fast. Really really fast, really really really fast. Yeah but really – really fast…and it’s now time to say goodnight to my blingy bling Hoka’s. Sad to see you go but you have put me through some amazing races this year. Onwards and upwards to new trainers…