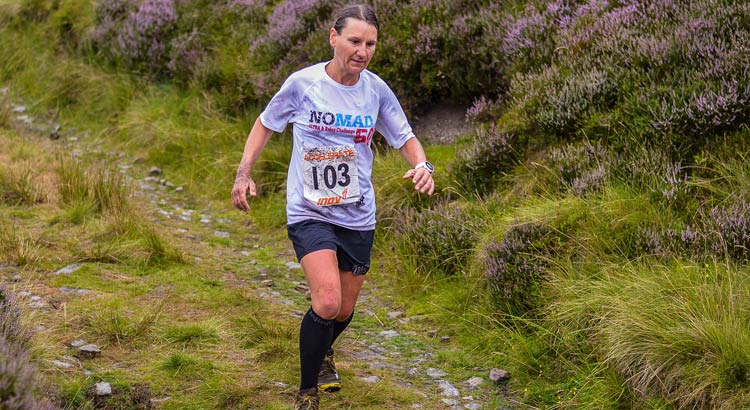 Friday night there was a fell race on only 20 minutes from home around the stunning Derwent Edge in the Peak District. Now I am no fell runner, I will never be a fell runner so this was ‘just for fun’ taking myself outside of my comfort zone and just having a go. But for a fiver, near on 7 miles and 1500 feet of climb it gives a runner something to do on a Friday night when most people would be down the pub instead. We are a strange bread us runners.

This was part of the Accelerate Gritstone series; a sequence of fell races throughout the year across the Grit-stoned Peak District.

Fairholmes car park was busy when I arrived, handing over my coinage I got handed back my number ‘103’ which I promptly pinned onto my white t-shirt. Now I make a note of my t-shirt being white as it didn’t stay white for very long. The start was just a few minutes away down by the overflow of Derwent Dams. The hardy fell runners looked all very professional in their fell shoes, fell gear and fell running club vests. For me, I was supporting my inov8 mud-claws which felt a bit weird after running in Hokas and Altras for the past 6 months. They felt tight and uncomfortable. I was not comfortable. Not a good start. Next excuse lined up in all its glory; my calf’s were tight, but really I should ditch the excuses and just run.

I positioned myself some 3/4 of the way back. And we were off, near on 140 of us racing up some steps, creating ample congestion to start with. Along the road like path we ran until we hit the proper hill trail, this was it; the only way was up. Within a few 100 metres most people around me had begun to walk, I joined them as my calf’s were screaming at me, calf’s are in pain give me pain killers. give me pain killers. Nowwwwwww….. oh cut the excuses girl and just run, or walk, or go home and go to the pub.

Up, up up and up we stepped, jogged and ran (a little). After a good mile or so it flattened out slightly. I jumped over the heather cladded landscape and ran in-front of some of the guys I was with, 1,2,3,4,5 passed. More upwards, Up Hollins Clough and round the back of a number of Shake Holes following the stream of nutty runners fighting with the hillside. Feeling strong I continued up the peat springy surfaces jumping over the grit-stone rocks almost enjoying myself and glancing up occasionally to see the wave of runners clambering up the steep inclines to the top of Derwent Edge.

I was 3/4 in the pack and knew certainty by now that I wasn’t a fell runner despite overtaking lots of people on the hill. Another 1,2,3,4,5 overtaken, but then splat – I face planted right into the deep peat. T-shirt now grey, grazed hands, peat infested knees, black socks now peat socks, Shall I just name myself Pete? I picked myself up shook off half the peak district from me and jogged on by. From which time a few guys had over taken me with caring words of whether I was ok. I was ok yes, no harm done. More climb approached and I began to get back into the groove and enjoy the hill monster. 2 miles in, 2.5 miles in, where was the edge of Derwent? Where?

If you can’t see over it, walk it.

Finally at the top, the rocky path opened up to slippery flagstones. I could see a few runners in-front of me zooming down the flagstones with not a care in the world. Too cautious in case I slipped, I jogged on through, hopping on each one methodologically. Fell running is not for methodical people. We passed monstrosity of Dove Stone Boulder and Dove-stone Tor, and the un-aptly named ‘cakes of bread’ – no cakes or bread here to my disappointment. By this time we were right on the edge of Derwent, no doubt the views would be stunning, but I really dare not look down in fear of loosing my footage and face planting in even more gracious style. No splatted Helen tonight please.

The path took a slight bear right to a stone wall and onto proper fell – a rabbit path at its best baked in heather, mole hills and grit-stoned rock. My confidence plummeted and I stopped and let all those runners that I had passed up the hill go by as they gracefully danced over the wild Dark Peak moorland leaving me to clumsily pick my way through the vegetation. The one and only check point was at Salt cellar bolder which we were told we had to touch as we got ticked off a list. 103, that’s me and I am not last even.

The so called ‘path’ descended back down a boggy walled edge as 20 or so runners came hurtling down past me fearless, as I picked my clumsily way down the route even afraid of a bit of mud. The bracken was double my height in places, overgrown and twisty. I was far too apprehensive for my own good, I mistrusted myself and my footing, as I struggled down watching with sheer admiration the frightlessness of all the other runners hurtling past me.

Through an area called Dovenstone Clough I fought. This wasn’t for the faint hearted and I felt weak inside, timid and gutless. I will admit I wasn’t really enjoying myself. I wasn’t pushing myself, challenging my inner demons, I wasn’t out of breath, I was just not confident with my footing, my stride the ability to trust myself to balance and to perform the trepidity of the course. Maybe it is because I have no fast feet. I don’t have good eye and foot co-ordination. I can’t dance, Zumba is a no no for me, aqua aerobics has never existed in my vocabulary, neither has step or any other activity that involves co-ordination. I am not relaxed enough, unable to let go and let gravity take over.

Why am I doing this? – Don Herres

More runners came colliding down, lunging past me full of confidence scrambling along and racing down the very steep section, leaving me for dust. Where I tip toed down, they would just shoot past me like there was no tomorrow. No fear. Maybe the danger scares me the co-ordination the inability free-flow, but I know I wasn’t enjoying it per-se. I wasn’t getting that buzz of trail running, of feeling alive of feeling that special thing about running. Yet here I was in one of the most picturesque parts of the Peaks on a Friday night surrounded by hills.

I was way out of my comfort zone by now. Eventually the path evened out but still with difficulty as natural obstacles such as tree roots and mole holes engulfed the narrow banking where the pathway winded itself round. I started chatting to the chap behind me about marathons, including Snowdon Marathon, Chesterfield, Ultras and just running in general. He made a comment about the back of my t-shirt which said ‘Finisher’ on it, that was us both tonight, if we could just ‘finish’ in-tact with no broken bones we would be happy. The conversation lasted a good mile until I pulled away up the next hill, which by this time had widened out somewhat and I felt much more back in my element, back on trail my feet blessed me with the more ‘familiar’ footage’ing. I began to claw back.

Up the hill I bounded and the feet began to connect to my head. More up hillness as I power-walked up the same speed as a guy who was running. This technique paid off as I then shot off at the top of the hill, 1,2,3,4,5 passing all the guys who had flown past me on the downhill. With passing remarks of ‘well done’ probably not understanding that I can’t run downhill but put me on comfortable trail and I am in my element.

Even the last bit of trail down towards the finish I was feeling much more confident, much steadier on the feet and finally found the love for the run. The road emerged after a very steep decent down a grassy banking and I chased another lady almost to the end overtaking her just a few 100 metres to the finish to come in at a placing of 103 wearing bib number 103. My time was far from 1hr and 3 minutes. It was over 1 hour and 17 minutes for just under 7 miles.

In running, it doesn’t matter whether you come in first, in the middle of the pack, or last. You can say, ‘I have finished.’ There is a lot of satisfaction in that. – Fred Lebow

Cake and drink supplied by Accelerate was a welcoming sight at the finish, in the misty drizzle on this, the first day in August. Well, did I enjoy it? Honestly? I don’t have the stability for fell running. However I turned up, I ran, I tried, I got through it. What have I learned? I have learned that I am not a fan of the proper ‘fells’ of racing, but I love trail. I love the longer distance endurance off-road events, rather than the short, sweet, fast, aggressive dog-eat-dog like fell races. It was however 7 miles that I wouldn’t have otherwise done on an extravagant and spectacular route. A well organised and marshaled event, worth a bash whether you like fell racing or not. It’s the challenge that counts.