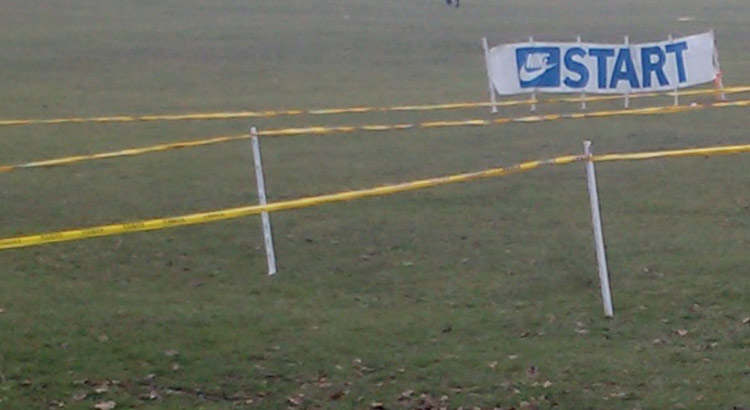 Finally a practical use for Graves Park – the Sheffield Open Cross Country races organised by my very own Sheffield Running Club. I’d never done XC before and enquired about it to several people during the past few weeks. Was I out of my league doing this? Should I be in the Sheffield Snailers – a running club for snail paced runners. Well as the saying goes any idiot can run but It takes a special kind of idiot to run a Cross country especially after a very hilly 5miler race the previous day and legs like steel – what more can you expect from a Sheffield lass? But the way I see it is that cross country is more interesting than just running in circles, sorry Don Valley but it is.

Running is beneficial for your legs and knees, it also good for the mud because it makes it feel needed – Altered from Unknown by Helen

It was nice to arrive and see some familiar faces ensuring the day was running smoothly and being wished luck at the beginning of the race. There were 13 of us in total for Senior Women’s. I need to learn the lingo for XC as I know nothing and stood on the start line with the majority of others supporting club vests and 6 feet of legs I did feel like the ugly, small fat duckling. Quack.

And Go! we went. I was supporting my no longer new trail shoes with studs, hopefully to keep me stable on this muddy grass and woodland paths. Did I know what I was doing? Oh no, I had no idea as the 6ft swans drifted into the far distance leaving the ugly duckling behind. Yet there were also some other little ducks behind me so I was OK, quack quack.

Cross country is about where you’re going and who you left behind.[sub_title]Unknown

And I would have thought that after the 5 miler downhill practice on the previous days that I would have mastered this downhill running but oh no, someone overtakes me on the first downhill-er. But of course I chase her up the up hiller. People shouting “dig deeper” “remember that Thursday training” (I don’t do Thursday training), and I think there was another Helen as the name kept being shouted out rather a lot and I am sure it wasn’t for me, until I had completed one lap and the Sheffield RC guys gave me a shout out – I was 5th place with the leggy Hallamshire Harriers Girls well in front by now.

Second lap and two of us are now chasing each other, for the majority of the lap, getting overtaken again on the downhill and again I stride up to match the other girl on the up hill and pass her towards the next lap. A final lap and I get ahead then yet again the girl overtakes me on the downhill. Are we playing games with each other or what? A final push as I get an extra breath of energy and stride forward and round thinking she will overtake me on the home stretch but I put one foot in front of the other, my quads burning from the previous day, ignoring them I cross the finish line in 5th, crossing my first cross country for 22 years. OMG that is scary! A complete 6km done.