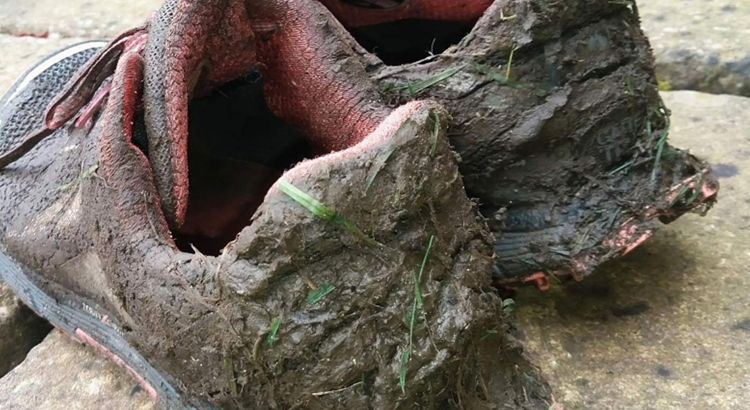 It’s back, it’s that time of year, its the Sheffield Way Relay. This was my first ‘race’ back in a year supporting club colours. I had done a couple of low key ‘ultra’ events this year (not races as I didn’t race them but just got them in for the distance) but no racing. I’d not dug out my club top for a year. Would it still fit, would there be mould on it? Would it still be blue? Yes it was still blue and intact. And my shorts were purple.

I had been put in leg 2 as it was local and nice and hilly. I had been put on with the lovely Rachel Rose. Nervous that I can’t run anymore, nervous that Rachel may be a tad bit fast for me and I would let her down, nervous that I may just go and injure myself, nervous that I am representing the club. Needed not to be nervous as we made an awesome unnervous team regardless of the double wee I had to do before starting.

Recycle those nerves and make them adrenaline.

The start of the leg is all down hill from Grenoside to Oughtibridge. We set off handed over by the speedy Debs and Sue, and off we went. Rachel set the pace down the hill, with me following just behind, this initially felt comfortable. At the bottom of the hill about 1.5 to 2 miles in, I stupidly rolled my ankle, first words were f***. Luckily it was all ok and I bounced back down the road towards the village of Oughtibridge. Then the upwardness of the uphill started. First up the road and then up a little side lane then across and up some fields with the sign ‘bull in field’ although there was no bull and then up some more. So there was a bit of up in this. Correct.  A team of Striders were just in front, as were some Smiley Paces which we caught up and overtook whilst going up.

Love hills and they will love you back

Then it was onto the Bradfield School Cross Country course – as a 12 year old being hurtled up this hill on cold cross country days brought back wicked memories. Having got a D- and ‘unsatisfactory’ at PE at school cross country was just about the only thing I would put mild effort into (apart from Swimming) but I was never any good at it regardless. But today I was in a good mood and put my school days behind me.

Onto the road and some more lovely upness. I was feeling strong and took the lead as Rachel followed behind. The men’s Totley team came zooming past us on the uphill never to be seen again as they descended into the Loxley Valley to be eaten up by the bog monster beyond the fishing lake at the bottom.

Rachel came into her own as she hurtled down the hill, elegantly with a beautiful hop skip and dance. I followed uneligantly with a twist turn and tumble. We passed another team of girls as we descended onto Loxley Road.

Down into Loxley bottoms we ran, both back together. One two, one two, one two. There was a great pattern emerging here, Rachel stronger on the downhills, me in my element on the up hills pushing each other at the right points. Happy mood once again.

Another team passed us as we climbed up the hill towards Dungworth. Plenty of Dung to come as we were to pass a couple of farm houses on our way further up. I was feeling good on the uphills, strong enough to power on through the muddy fields and open the gates for Rachel, who was struggling a little with her recent achilles injury. But I turned round to Rachel and told her she would make up for it on the descents and round Rivelin Dams – giving me a run for my money.

Finally at the top of the last hill just after Loadbrook (Stannington) marked the last 2 miles of downhill. Through a number of fields and over some old rickety looking stiles. Rachel was once again very nifty on the stiles I felt like an elephant in wellingtons in comparison, big and clumsy.

Onto Manchester Road I thanked the marshall as we powered on round Rivelin Dams. Rachel set the pace and I was now at my limit trying to follow her footsteps just a mile or so to go. Regular running territory for me so I knew every knook and cranny of the stones, mud and puddles. I love this little bit of Rivelin Dams, slight incline, slight decline, round a bend, up some more down some more and into the finish.

We worked well together on the last mile, Rachel pushed me round until the last little bit when I found some more power and managed to keep with her, we both entered the handover area together, breathless but chuffed to bits, handing over to Helen and Jenny, go go go girls, off you go.

Another great run route and a lovely low key event organised by the Steel City Striders. One day I will do the whole 5 legs as it was supposed to be my first ever 50 miler back in 2012 before I was stupid enough to get injured.

The most important thing for me about today was being back running at a good strong pace for where I am at with my running now, being part of a team and back wearing the Sheffield Running Club colours and feeling part of a running community again. I would love to be back again soon. Running – I’ve not forgotton you.