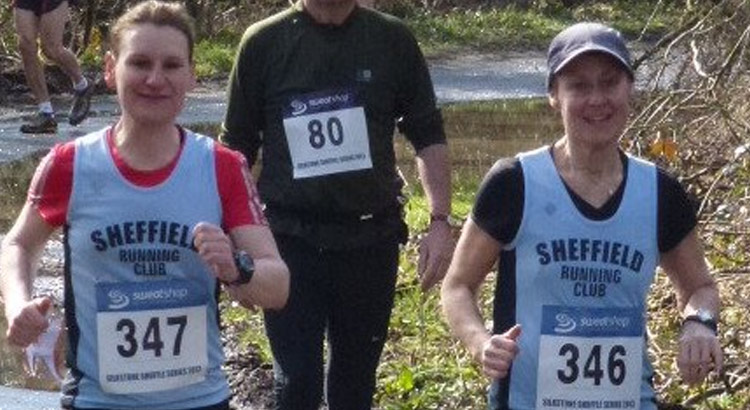 It was a lovely spring saturday morning, No winter lasts forever; no spring skips its turn. A little muddy, with a slight chill in the air and still a little bit of snow lingering in the corners of Barnsleys’ Silkstone as myself and Deb’s (and family) made our way to the dark side of South Yorkshire’s up north to run 4.4 miles around Silkstone – part of the Silkstone Shuffle series – 4 races in one year.

The course looked interesting, across stiles, up hills and down fields, sounded bliss and it was. Interesting and fun.

This was my second proper ‘race’ since being injured, still lacking in confidence with my running I had no real expectations for this event, not knowing the depth of the field or the course. Debs – Champion of this event only a few years before encouraged me to warm up and gave me a running reccie of the course.

The course had been moved slightly, shortened, just to avoid a big gigantic puddle so some 0.1 miles shorter. I placed myself mid pack lacking in confidence as usual and off we went.

First down a little lane and then onto the trail “hill”. Can it be as challenging as Hagg Hill or Manchester Roads’ Hagg View? Oh yes. A good mile slog up and up and up. Although I was initially mid pack I got my usual strength and ploughed up the hill after Debs who had shot off at the start, then past 3 guys then another two guys and up I went. Up I said, up.

Even at the top I kept it going ploughing round the corners and onto the only bit that was road. “No Pain no gain” had been chalked onto the pavements.

Back onto trail and downhill I went. My downfall. Literally. The three guys I had over taken on the hill got me on the downhill as did another runner. Why can’t I run down hill?

Run run run as beautiful as you can, you can probably catch me as I am no gingerbread man – Me

Deb’s wasn’t far behind me as I shouted at her to show me how it’s done. Across the field more people over took me and Deb’s was literally one step behind me putting in an amazing effort down the ploughed manured field. I guess I really didn’t want to go splat! One more mile and the cake is history.

Over a couple more stiles and down another field. I wasn’t far away now I could see the little lane we had come down some 30 or so minutes before. As I jumped over the stile I got shouted as “first female” WTF I thought, as Debs joined me on the road and we ran simultaneously supporting our “Sheffield Running Club” vests. One passer buy asked us who is going to win, I pointed at Debs and told her I was loosing it big time. However Deb’s continued to push me.

The wind at your back, the sun in front of you, and your friends by your side. – Aaron Douglas Trimble

As I entered the last field and the finish was in sight my body had gone flop and almost given up, Debs still at my side would not over take me although she had the energy to whizz straight past me, we chatted about crossing the finishing line together. In the end Deb’s let me cross the line 1 second before her although I know she could have really pushed harder I was utterly grateful for her kindness to push me through that last half a mile and ease back to push me to my limits.

What a lovely event, it didn’t matter who crossed the line first it was enjoyable and we supported and pushed each other and that’s teamwork at its best. An added bonus we walked away with 2 bottles of wine (hic).