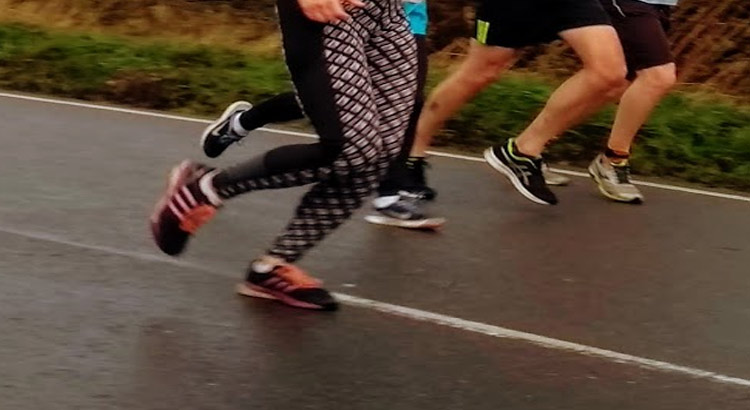 So in the quintessentially South Yorkshire rolling hills, we take to these rolling hills on this springy but a little bit damp evening.

So we got taken over a bridge to the start line, even though there was actually no line. The run was just in Barn-zaar-lee, the guy starting the race was broader than broad, even the local Barnsley club runners couldn’t understand him; Wot thay on abart? Shut thi maarth and geetonw’it

And we’re off, running up hill up hill up hill and up hill. Just another mile of up hill to go, with a trail of runners behind and in front, I think I was just somewhere in the middle. Middle is good, middle ground.

My therapist is the pavement. My drug is endorphins. My foe is the next hill. I am a runner

My legs were still heavy from the weekend run and I knew instantly I was not performing my best, heavy clunky clumsy, so that was fine, I settled down into my clunky clumsy state and ran best I could given how I was feeling. Geeyore! Tha cant run proper all’time.

A race is a work of art that people can look at and be affected in as many ways as they’re capable of understanding.- Steve Prefontaine

That is the sort of race which one really enjoys – to feel at one’s peak on the day when it is necessary, and to be able to produce the pace at the very finish. It gives a thrill which compensates for months of training and toiling. But it is the sort of race that one wants only about once a season – Jack Lovelock

I did get a nice handshake from a bloke who beat me by 1 second however at the end who kept me going at that last 200 metres. Thank you bloke with the handshake.

Overall, What a lovely route, across the Barnsley countryside although not my greatest performance, a gorgeous route and that’s what counts; I am actually pleased that I didn’t perform that well as it has taught me a lot. Congratulations to Clare and Cat for some great PB times smashing 34 minutes and to all the other 14 Sheffield Running Club runners that evening all with cracking times. In need of another Female VET for a full female VET team. Wonder if my cat could run and would count?

My Auntie Nelly called the other day. She is as deaf as a post. ‘Aunt Nelly, we are thinking of going to New Zealand for the winter,’ I said.
“New ceiling. There’ll be a lot o’ muck. Hev it artexed. It’s a lot cheaper.