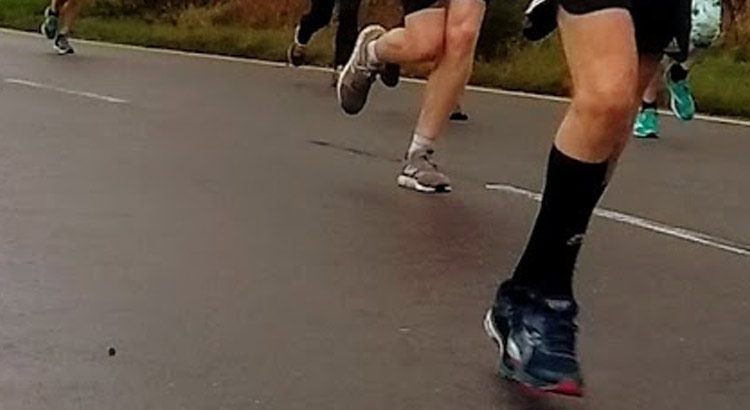 The third South Yorkshire 5 mile Road race series took place in Pickburn on 27 April 2011 in Pickburn a small village nestled near to Doncaster.

The sun had even turned up for this bright sunny evening, it’s first proper appearance for one of these league races. It wasn’t wearing a bib number however so just followed us all around the course instead.

Runners mingled near the pub but not in it before the start. On-time we were off.

A run begins the moment you forget you are running – Adidas

A slight uphill to begin with as people gained their own space and speed around the corner and back down and round to where we were past the pub again and up another hill and round. And back down again. Help I am getting dizzy.

I was suffering within the first 2 miles and noticed this considerably as people I recognised were passing me, what was wrong? Even around the 3 mile mark, I felt myself being sluggish, I am sure my garden slugs would run faster than this at times. Maybe they are eating the right things, my Rhubarb, dill and peas.

A man can fail many times, but he isn’t a failure until he begins to blame somebody else. – Steve Prefontaine

The most enjoyable part of the run came within 3.5 miles when it went on to track and I started gaining places again as I felt my bounce come back and some hills, I like hills as I gained more places whilst some of the guys started walking. That made me feel better, got you, and you and you and you and back round. Hills? No problem. I can go up and down for hours.

I know one of my downfalls is downhill and that proved me right once again as the guys I passed on the hills got me on the downhill ones. However, to not walk up the hills was a major achievement for me.

My brain was rather confused when the marshalls were shouting 300m to go, no this wasn’t right something in my head told me that they said 500m or 800m not 200m but once over the bridge I saw the finish line, surely this was too soon? Most odd. I then put on a sprint determined to get the two girls in front of me, if you want to come in second…follow me! and there I overtook one girl then it became a battle to the finish line between myself and a Totley (Sheffield) runner who just got me right at the end by about 0.5 seconds. Well done Totley runner see you again! And the course was 0.25 miles short. Not again, what is it with these races being inaccurate?

An odd race for me as people overtook me halfway through but I re-gained further up. Is this because I like hills or off-road or was I just feeling fat and flabby? Or should I just accept I am getting old and slow? Or is everyone else just getting faster? Baa.