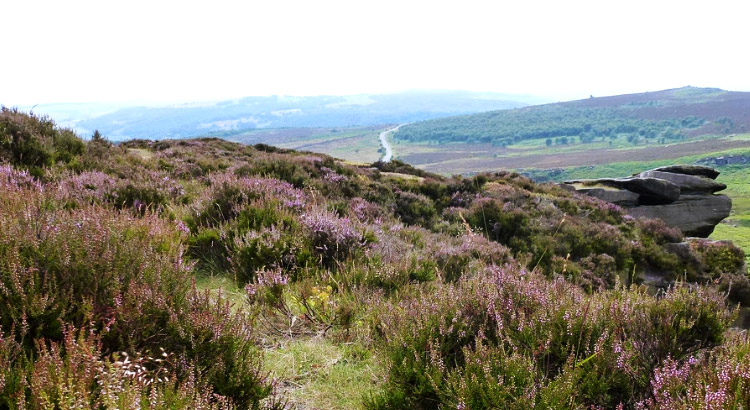 It was an exciting typical sunday at the end of January. It was raining. It was exciting. It was time for the Tigger Tor, a 9.something fell race in the heart of the dark peak organised by the lovely Totley AC. Number one rule when doing a race, always check the weather and go prepared regardless of kit checks. Number two rule always check the start time of the race.

Well I got the first bit right and had all correct items in my rucksack and passed the kit check. We had reccied the route a few weeks before thanks to fellow Twitter followers (@houndkirk gets a big mention for leading the group). However I did not pass the start time of the race and myself and fellow fell friend Shaun turned up ready to run at 10am instead of 11am. Doh! Not only this but I had told fellow club runner Sue the same thing, so for an hour and a half before the race we huddled in my little banana car chatting away and watching the rain gushing down.

Fell races are such a different animal to road races. Everyone began to huddle in the club room, ample waterproofs, rucksacks, outdoor brands galour, RAB, inov8, raidlight, berghaus, OMM, you name it the brand was there. No sign of any spikes, puma’s, shorts or vests. This was gonna be one hell of a cool race.

Everyone got called out to the start line, the tortorous downpours threatening us as we all stood there drenched before we started, some 9 point something miles of hill infested fells stretched infront of us.

And we were off up onto the road as 400 or so raincoats ran up the road and onto the hills. This was a sight for fantastic eyes. I had decided to run in waterproof bottoms as well as my top. What a wimp. I was unable to feel my toes for the first mile as we crawled through a mud infested field and up towards houndkirk road. Shaun and Sue were getting really well chatting away as I tried to keep up with them.

It was gusty at the top of ‘The Houndkirk’, not a spot of blue sky, who needs blue sky anyway? Blue skies are overrated. Across the heather infested rabbit paths we went the hundreds of runners battling through the gusts of wind, the bitter cold air, the rain peaking up through the dark peak.

The fist cheers from hosts Totley AC at Oxstones kept us all going as we faced the inevitable ‘ Burbage Bog’ – a running stream of mud, puddles, streams, and more mud mud mud. The lively wind battling against us pushing us further into the mud. Heather clumps being dragged down on the bitter moors. This was bliss in a surreal way. Sue and Shaun were ahead but the inevitable shoelace incicent meant that Sue had to stop which gave me time to catch them up. We had all decided to run together which really made the race for me.

Act like a horse to water. Be dumb. Just run. – Jumbo Elliott

We were helping and encouraging each other. I was struggling even three miles in, the toll of the Northern Cross Countries the day before in 5 miles of mud were cursing my calfs but I was determind to keep on ploughing through the mud.

One girl infront of me went for a great face plant straight into a massive mud splat, surrounding people asked if she was ok as she picked herself up and ploughed on. This is the essence of the fell race community, such fun, so friendly just ample amounts of unknown friends.

We hit the main Burbage path but oh no this race wasn’t about paths it was about fell infested features as we climbed down the rock faces and meandered our way down Burbage valley. The first stream crossing was gushing but shallow. With a helping hand from from Shaun myself and Sue got across the stream just with a touch of water.

A lovely shout out from fellow Totely and twitter follower Simon edged me towards enjoying this far too much as I hit the marshland sinking far into the peat bogged earth.

The first proper big hill towered above us, all the fast fell ferrits scurrying up the hill. In pure fell style we power walked up scrambling on all fours at points to reach the path that took us onto the crest of Higger Tor. Checkpoint time and because it was raining we all had our numbers underneath our waterproofs. I had to remember my number- that was hard enough in the beating winds as my brain felt it had frozen over.

If you never attempt the ascent, you’ll never know the thrill of swooshing down the other side. – Author Unknown

Onwards and downwards through the rock faces and onto more gorgeous bogs. I was in my element here gushing through the streams and mud. Right at the bottom came the second river crossing gushing up to waist deep as Shaun strided across it elegantly far too elegantly for a male species. In lovely Shaun style he then helped Sue across, then myself then all the other girls following closely behind. Comments spread across the girls, they asked me his number and name, I didn’t give his mobile out only his bib number and name,and then onwards and upwards we went taking the opportunity to munch on some delicious ‘energy’ cereal bar 20p from either Home Bargains or Jack Fulton because they go out of date in February. Yum and a bargain too just like this race – did I mention we paid £6 to run in torrential rain, hail, wind and freezing cold? Oh I forgot to mention that? Bargain.

It’s supposed to be hard. If it wasn’t hard, everyone would do it. The hard is what makes it great! – Spencer Moon

Back up near Burbage and across to Houndkirk Road we went. We hit Houndkirk Road but fell runners don’t do road not even Houndkirk as Rocky as Houndkirk road will be.Instead we meandered across the fell infested heather a.k.a Houndkirk Moor. It was all downhill from here but still tricky and needed amble concentration in order to battle through even more mud and streams. Familiar territory once again as we hit the path that we had come up only a drier and less muddy while ago.

It was all very downhill from here and I got a feeling that Sue and Shaun could have pushed on faster so I told them if they wanted to go ahead to leave me behind as my calfs were screaming by now and I had lost all energy. However we kept together squeltching through the final field and onto the road which by now was flooded itself. You get to a stage in running where you don’t care anymore and it was just about running and finishing.

We all crossed the line very much together, with a flash of our bib numbers for officiality and big cheers from Totley AC.So 1 hr and 53 minutes later, 1700ft of climb, 1 million tonnes of mud squeltched through, with 2 tonnes of that on me, 6 million rain drops and a happy but soacking wet smile I was happy. Little did Shaun know he was talk of the Girls Changing rooms for his helping hand across the river.

That’s the great thing about these sorts of events; so friendly, such fun such fun. I wonder if Miranda would fancy doing one?

I wait for the day when life isn’t about being locked up inside yourself, but throwing yourself out into the wind and flying – Abby Snow