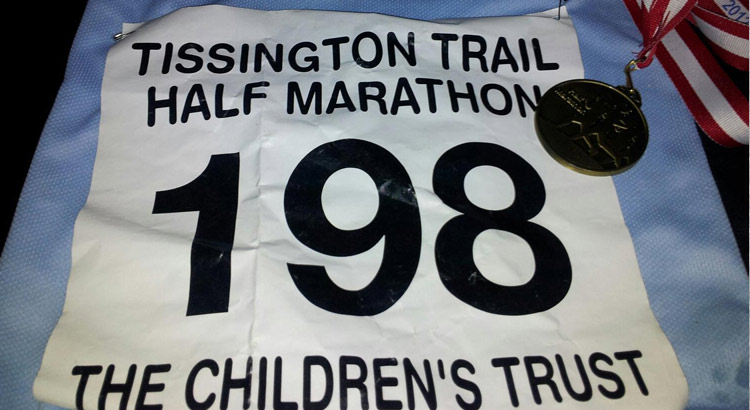 My journey to my sub 1.30 half marathon started at 7am as I left Sheffield and conquored the foggy fog of the Peak District. The beauty of the low flying fog left me breathless, frightened but in awe of this amazing place. Even my fog light made an appearance. Go fog light.

I arrived at Ashbourne – the finish of the race, yes I said finish not start, was I cheating? Was I going to finish before I started? This was a one way race, I love one way races as I feel like I am on a journey, on a trail, the Tissington Trail.

Why do we run? Because it feels so good when we stop. – Author Unknown

A coach took us to the start of the run at Parsley Hay where we would run 13 miles (it was slightly short so it was 13 miles according my Garmin) to Ashbourne where the car was parked, and where I was on a “pay and display meter” so I had to be back for 12.30 like it or not!

The Tissington Trail for those that don’t know is a site of a former railway line. It appealed to me because of my love for off road running although it was without hills – being mostly flat or downhill. I was worried as I am not a flat or downhill runner, I love my hills, however it would be an interesting experiment and a fast one at that.

So at 10am we got taken to the little start on the puddle infested trail. And before we knew it the gun didn’t go off but the runners did – false start, false start, however people had begun running I looked around and ran off into my postcard; a little taken a back but at least going forward.

The path to success is to take massive, determined action.
– Tony Robbins

Within minutes the trail runners had spread out nicely and I was running in a nice pack of around 6 or 7 people, a mix of club runners including two or three Barnsley runners. A couple of them dropped off and the rest of us ran together for the first 2 miles. At the two mile marker I heard one guy turn around to his fellow club member and told him to slow it down as we had just run around 6.52 minute miles. Oh to hell with your body how is it feeling? Don’t run against a bloody watch, do you hear? Too fast too fast? Listen to your body, your body will tell you what it can do. I was the only one not looking at my Garmin, to hell with it, this was flat and slightly downhill with a little bit of flat and a very very very slight uphill so I was bounding along.

You don’t run against a bloody stop watch, do you hear? A runner runs against himself, against the best that’s in him. Not against a dead thing of wheels and pulleys. That’s the way to be great, running against yourself. Against all the rotten mess in the world. Against God, if you’re good enough – Bill Persons

Dogs, dog owners, kids, kid owners, bikes, bike owners cluttered up the trail though there was no litter. The first four or so miles all owners and their luggage politely cheered us on and moved out of the way for us all very polite and we thanked them. We even came across some horses and their owners. Neigh.

Amidst those using the trail on this bright Sunday morning, the landscape stood out to be absolutely spectacular. The gorgeous Derbyshire Dales with its white washed walls reminiscent of the quintessentially English Yorkshire Dales stretched either side of the trail. The chalk infested landscape and beautiful crisp green grass cheered us on, by waving in the light breeze. The grass is always greener here. It was blissfully enjoyable. Due to the postcard picture scenery I didn’t realise how fast I was running, I was just striding on. By 4 miles I was running on my own, having dropped two or three of the group and allowing the speedy Barnsley girl and bloke to power on infront of me.

Water was available at the three, six and nine mile markers (ish) with marshmallows and biscuits at the nine mile marker. Water was most welcome on this warm October morning as I weaved my way in and out of the shade.

At just over 6 miles or around 10km I had a peak at my watch my first peak, Peeky boo, It said 41 minutes something, what? I had just run 10km in just over 40 minutes. Ok this is wrong, or maybe its right as the route was mainly downhill-ish and flattish and so maybe it made sense. In addition I did still have altitude in my blood from my trip to the Alps so maybe this helped?

However by 6.5 miles I had a blip and a Totley AC guy came powering past me. “Well done Totley” I shouted as he strode onwards but not upwards to then pass the Barnsley runners in front. Well done Mr Totley AC runner, I wish I had that strength.

7 miles in and I was not feeling as good, with a bit of dizzyness from the sun and shade, disorientating me. I had lost my jelly babies which had crawled out of my back pocket and fell out. Oh dear I am jelly baby less. Luckily I still had a gel with me. I hate jelly babies that go and crawl out of my pocket. Next time I am putting a child safety gate in my back pocket.

I gave myself a prep talk and ran on. I can do this I am more than half way there, the glass is half full not half empty, and just look at that amazing scenery. Just pure bliss.

After my blip and prep talk I got stronger again; took on a gel and powered through, counting in my head, one two three, a hundred, one, two, three, four, a hundred and eighty. I can’t count so I gave up and ran instead.

10 miles came and went. Just three miles, three miles through gorgeous woodland. This was the life. The trail was however getting busy with Sunday day trippers and I did have to shout an “excuse me please” very loudly to families blocking the path as I could not even hop skip or jump around them. This was really my only complaint and did become even more problematic as the finish got closer and closer. However some of the day trippers were most supportive. I even got a “oh look a runner from Sheffield, Go Sheffield” I waved at this lovely group of day trippers and thanked them.

Ploughing through the 12 mile mark I did not expect a hill, downwards first then uphill, this was a hill, a proper hill which meant I had to slow down and slow down fast as there were a number of those gateway barriers that prevent things like motorbikes and stuff getting through. In addition one of the kids was playing on the bars and almost stopping me getting through – Arghghg I am nearly there please little child you are lovely but please move out of the way, thank you and bye bye.

At the top of the hill I tried to put in a bit more power but alas these day trippers were breading like rabbits, “excuse me please” I shouted far too many times as kids cluttered the trail with their posh pink bikes with pom poms and things attached to them, boys with bright blue scooters and adults having their AGM’s or mothers meetings on the trail.

Soon the finish crowds came into sight although I was still dodging the day trippers, hoping I wouldn’t trip myself. Round past the toilets, where was the finish? I couldn’t see it, where was it? Oh and its here and bang it just appeared unexpectedly as there was no 13 mile marker – arrhhh the route was 13 miles not 13.1 miles, that will explain it.

For me, as for so many runners, there really are no finish lines. Runs end; Running doesn’t. – Dean Karnazes

I came in 2nd female and 10th overall out of a field of 200. I may well have passed a lot more fields than that too. I looked at my watch after scoffing the ample amount of jaffa cakes and took a ribbon (biscuit not a real ribbon). There were also digestives and many cereal bars.

After mooching around for a while seeing if I could see anyone I knew and cuddling a huge doggy I made my way back to the car park and checked the official results. PB’s don’t grown on trees, however I dug deep on the Tissington Trail to find this PB. I had ran 127.41 half marathon – no no no, I had done a 127.41 13 miler, not a half marathon. However it was still classed as a half marathon. I think.

The race was brilliant, I thoroughly enjoyed the run and more over the scenery. I was happy, I was in my element, I felt good almost all the way through it, I enjoyed it so much that I even got two bottles of wine for my efforts. hic.

So if you want a fast 13 mile race just to practice some speed I would really recommend this route, its gorgeous. It’s not chipped because it is quite a low key race and maybe its not pure enough for some or accurate enough or whatever enough but to hell with all that; I am not a purist anyway. Stick me on a trail or off road and just watch me run what I would class as the most beautiful half marathon in the UK. Unless you know otherwise?