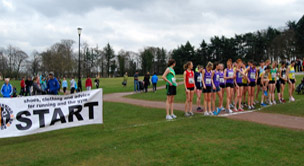 1. (n.) relay race – a race between teams of contestants, each contestant being relieved by a teammate after running part of the distance.

My first club relays at the University of Nottingham, that’s if we could find the entrance to the campus, that is. Being true northerners running for Sheffield Running Club we went in at the Northern Entrance and meandered around to find lots of Chinese playing football. We we in Beijing instead? ni hao. That is not Knee high in Yorkshire slang by the way.

Clare was first leg, I was second leg and in true Rolf Harris style Cat was the third leg,

We did a third of the lap backwards to warm up down the hill and up the hill, it was even named a hill but it’s ok we are from Sheffield we can handle hills. It was only 2 mile legs – that’s fine our legs can handle it.

Running is not a test but a therapy,
not a trial, but a reward,
not a question but an answer

First off Clare zoomed around and some 13 minutes and something later came whizzing into the finish to tag me to set off. I was on my own for the first half mile or so and could see two runners in front of me, around the lake I went catching up with one of them on the first bit of the hill, overtaking and then catching up with two others who proceeded to over take me on the home stretch going down hill. Note to self must practice down hill running more. So I tagged Cat who went storming off ahead overtook the two / three other teams and crashed us up into 13th place for a fantastic finish.

In a world of give and take, Give what it takes

A great run by all, and to be competing against some of the very strong University teams who can run 2 miles in around 10 minutes is a great achievement for the ladies team at Sheffield RC. Thumbs up to us.