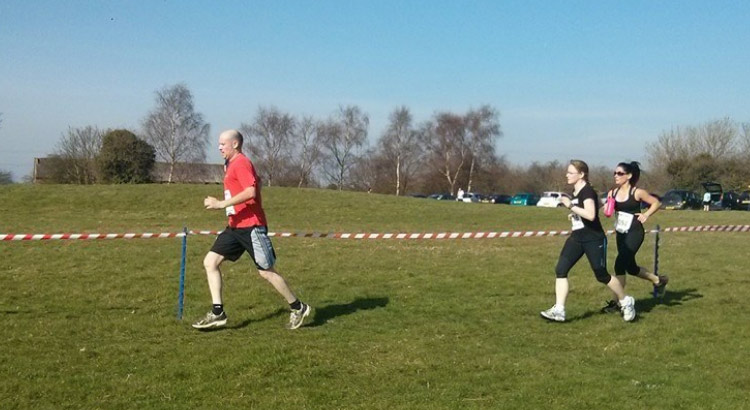 Sunday morning, the day after a 21 mile event in the Peak District and my calfs are feeling the effects of near on 3000ft of climb but hell I am on my way down to Derby in my yellow mobile to run a 5 mile race with my bestie Becky. Hell why not? Something to do on a Sunday huh? A Brucy Bonus – the sun is shining and Helen has got her shorts on, Hip hip hip hurrah – or not.

Becky was telling me that last year the course was almost covered in snow and it was that cold that everyone PB’ed. This year the sun was shining and the temperatures were scorching into the early summer teens. Warm.

We EOD’ed (entered on the day) due to flexibility. A nice low key event, not chipped, no big hoo haas just a simple little marque in a field with some local running club guys. It started in a field and funnily enough ended in the same field.

The start wasn’t until 11am. We all lined up I was somewhere in the middle and we were off around the field. I was soon to find my space and pushed on through out of the field and down the road. The road was down, not down down but just down. It felt down. Just a little.

‘Now… Just run.’ [said the Doctor.]
One of the things you learn very quickly around the Doctor is never to question him when he says that word. You just run. It’s almost like breathing. – James Goss

Through a quintessentially English little village with the locals cheering us on and then we hit a main road stretching a good mile in front. I could see a girl my target in-front of me and I hit the target some 2 miles in just before turning into another village and big shouts outs for us. The route went through a little park which was pleasent and a bit on grass nice, I like this, before turning into a housing estate and beeps going off around me – 3 miles in.

The water stop was a pleasant surprise and much needed at a 3 sweaty miles. I could feel the legs now as I pushed on and my breathing got heavy. I was struggling struggling badly as the road we had come down appeared for us to go back up. Slightly uphill I could really feel it. Another target just in front of me was out of reach, another girl 10m in-front of me but I just didn’t have the power.

A small ‘mile 4’ marker told me to keep on pushing and I did though I was pushing really hard by now and my breathing was getting deeper and I was struggling, really struggling. I entered the field again and put in a bit of power not expecting that I had to go round the field again. Someone asked me if I was ok, yes I am ok I just run Grindleford yesterday but I am ok, Ok? Thanks for asking though.

My target girl was getting faster I couldn’t catch her, far too fast, as I hit the grass and could see the clock just turning 35 minutes, blimey had I really almost sub 7 minute miled for 5 miles? Blimey… and my watch beeped 0.05 miles later I came in to clock a time of 35 minutes and 18 seconds just 8 seconds behind the first vet 35. Damm that Grindleford Gallop as I grinned widely. Boom boom grin. Spent.

Stick a fork in me, I’m done – Unknown

I had the pleasure of cheering Becky into a PB of just over 45 minutes, so proud of Becky. And fellow runner Dean also walked away with a PB, hell and I am not even into PB’s, what happened there? Well people, I just ran…. simple. Although this was apparently a PB for me, my last 5 mile road race was a few years ago and as against theory goes I have run faster in half marathons. Silly me. That’s why I love running its just so simpley confusing.

Simple as that, apart from my calfs were howling now, they were so upset with me that I had to try and rock them to sleep but they just wouldn’t have it so they de-friended me on Facebook. Thank’s Calf’s I love you too. However the following day they were going to get bashed out with a lovely sports massage because I deserved it, OK. And they will be back supporting those off-yellow calf guards to match my car. Brum brummm they will be off again soon.