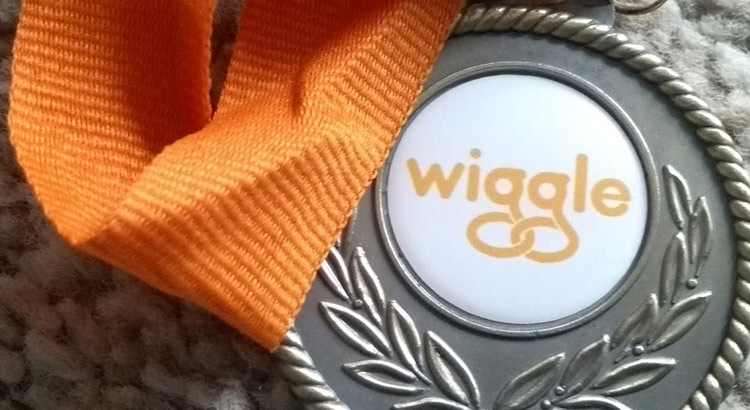 Wig Wag wig wag your tail for the Wiggle 10km Cross Country at Catton Park in Tamworth, a 10km cross country and running with dogs (not cats despite it being Catton park). Mudtastic! This was my second time at this race – last year I came second too, lets see if I can come second again.

Waking up to snow, yes I said snow, I headed down to Tamworth via Derby (ritual journey) with Becky to run this cross country, We both loved it last year so why not give it a go again this year. The race was no piece of cake though it could have been a missassipi mud cake if any.

The course had changed slightly due to the mud pies enroute. A 10am start and we were off. The first half km or so saw many runners infront of me but I soon began to pass them, initially 10th or 15th female, one by one I gained a place to put myself in a good position for the first up hill wiggle wood stretch. And wiggle in and out of the forest as you do when you are wiggling on a wiggle run.

Then out onto the fields, with lots more mud. It was hard to get a grip up the hills even with trail shoes on but it was all about trying to keep going forward not backwards.

Cross Country isn’t for everyone, only those “weirdos” who like to run through the woods,
mud and hills in little more than underwear. – Author Unknown

At around 2km someone shouted first lady to me – mission to keep this spot – could I do it? rarely do I turn around in a race to check on my fellow runners but I did glance around to find no one else near me. A few male runners infront of me and one by one I ticked them off to gain a few more places.I always tick them off up the hills. I am not afraid of hills.

I didn’t particularly come here for a mud bath but I got one all the same. The world is mud-luscious and puddle-wonderful as I splashed about jumping over streams, puddles and mud, did I say there was mud?

Mud, mud, glorious mud
Nothing quite like it for cooling the blood
So follow me follow, down to the hollow
And there let me wallow in glorious mud

After climbing a great hill, one only finds that there are many more hills to climb – Nelson Mandela

Back out over the top and dropping down into the mud infested field I had my eye on another runner just infront of me who I followed but shouldn’t have done as he went the wrong way, so back we went and round again. I was feeling tired but good at the same time. Keep it up keep it up and keep yourself up keep yourself up.

The finish was in sight some 2km away keep wiggling yourself to the finish come on you can do it – no other female (oh Lady my honor, lady) had passed me and no lady was going to pass me now, fight for that position fight and which way now – oh down there to avoid the mud ok thanks and there’s the finish – and I am through in a time of just over 49 minutes.

The first man came in at a time of 43 minutes so to do 49 on this course was actually really good. Speaking to others afterwards most people were between 7-11 minutes behind their PB’s so a well earned museli bar, banana and cup of tea for me thank you very much. And very well done to Becky and Chris, you won’t get much more demanding than this. No one was a stick in a mud for running this route today.