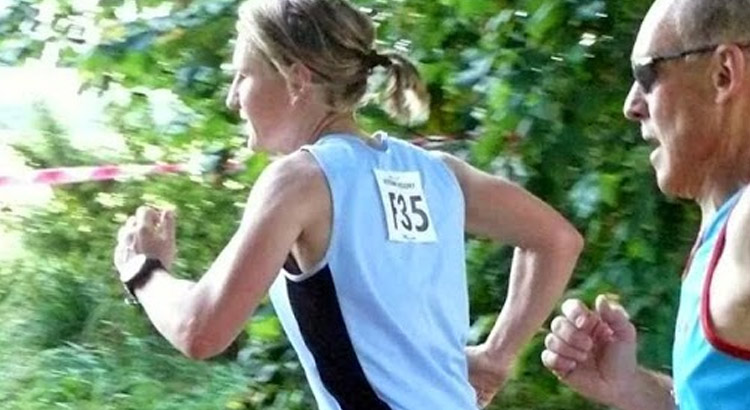 I got picked up by a big white mini bus, full of enthusiastic Sheffield Running Club guys. Oh what a lovely bunch of people we are. Ee, by gum.

Up the motorway we went; ‘Ey up; an hour later we were at lightwater valley home of swings and roundabouts and runners running about round and round along with a rollercoaster or two all set within a ghost town. Get the picture? It’s neither nowt nor summat

Some fellow club runners joined us later and after the usual chit chat and gitter gitters a few of us went to reckie the course, a few laps of moss infested ground, it’s what they call a “hill” – it’s what I call a “slope”. The course already looked churned up from the youngsters who had already run around it afew times.

The day was remarkably warm for January most people supporting vest and short. Me looking a right plonker in my three quarters, shorts I say? Shorts in January, can you feel the cold just reading this?

After too many trips to the loo to count on both hands and toes I ventured off on my own to do my own little warm up – something I often like to do to free myself from anyone else. I didn’t really know how I would get on in this event. The girls team had some very strong runners; Jenny, the return of Rachel, Cat and somewhat injured Caz who are all really strong and rather fast. And the proved me right as the gun went bang and so they all flew off leaving a patter of dust behind them, and me and Amanda.

I plodded down the start straight in my own little world, oblivious to the others, there was no chance of keeping up with them, I wasn’t even going to try. Plod plod plod and round the 60 million bends I went focusing on myself and my own little run. Within half a mile or so people were begining to get puffed out. I pressed on and began to work my way through the field feeling quite strong. The first short lap felt ok, though I was aware yet again that I was the only one without spikes as I supported my little trail shoes and three quarter basic trousers – oh I am so fashionable and into this whole gear thing..oh yes, oh no.. just get back to basics and run.

Into the second lap and I could see a Sheffield Running Club vest a good 200m or so infront of me, which spured me on. I was still feeling ok and pressing on overtaking people at every opportunity. Though I was breathing hard I didn’t feel too out of breath. I kept that running club vest in sight round the second lap and within the third lap made my move on a group of 5 runners where Caz supporting the Sheffield Running Club vest and a dodgy Achilles was still running strong – bearing in mind this girl was going to pull out only seconds before the gun went off, now that’s what I call having ample amounts of guts. Exchanging a few words of encouragement I overtook the group and stayed just infront of them for the rest of the course even managing to over take a good few others within the last half mile.

Around 300m before the end there were three girls infront of me x2 Rotherham girls and another, I passed two of them rather chuffed expecting them to chase me, but they didn’t so made my move on the other Rotherham girl, I am gonna get you, I am gonna get you, I am coming to get you. A Rotherhamite shouted out to her “there is someone sprinting behind you” – “what me?” I thought? I can’t sprint, can’t be me is there someone else behind me? No time to look just run girl, just run and I got her and ploughed on almost taking a tumble to the finish line.

Whilst I was running it didn’t feel that fast yet looking back on the race and the splits a 7.12 minute mile on cross country isn’t that bad as a start to 2013 – is it?

The best was yet to come as we watched the men go round and round and round (and round and round) cheering them on at every opportunity. I found it funny that our very own Meles who stayed in second place for the majority of the race got more shout outs than Jonny Brownlee Olympic Triathlon Guru. Go Meles, go. And he must have listened for next minute he had stormed ahead and won the event. Victory for Sheffield Running Club. All the other guys did brilliantly.

[headline h=”1″]Running cross Country is the closest man will ever get to flying . – Josephh VanderStel

The event I am told is very competitive, so just to take part was a challenge in itself.

The after effect of running round muddy fields took its toll on us, for the girls lusting after Jonny Brownlee who was in his Bingley tent next to ours – receiving hugs and kisses and obligatory flapjack from the girls, and delving into the array of cake for the men. Munch munch munch – hell we deserved it.