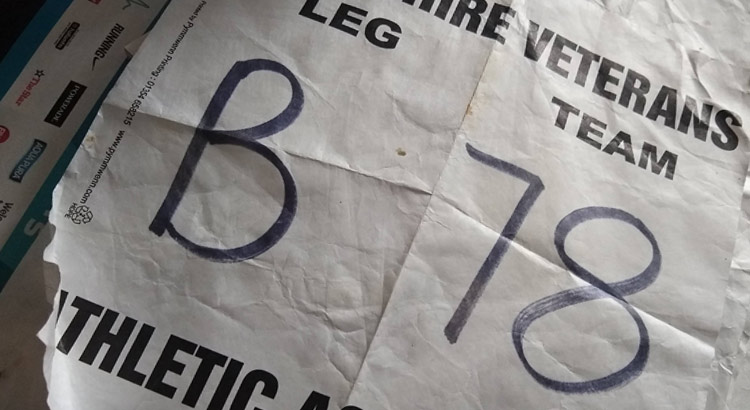 Today’s event – the Yorkshire VETs relays, nothing to do with men and women dressed up in white coats running around with dogs, cats and guinea pigs, no, this was the oldies relays for all clubs in the Yorkshire area. It certainty wasn’t raining cats and dogs today either as the sun was blazing down on Robert’s Park in Saltaire, Shipley, West Yorkshire.

There were lots of Yorkshire clubs milling about as we arrived in the glorious sunshine infested park.The park was remarkably pretty, exceeding all expectations. Some of the locals were amused that all these oldie runners had gathered in the park to run around it and it had to be explained a number of times what sort of event it was.

And they were off.. first for the ladies was Sue, putting in a brilliant effort all with a fantastic time and position. Sue handed over to me; being on the second lap and off I went. The watch failed initially so I ended up faffing with that for the first 10 seconds or so and then I ran. I felt quite strong as I pounded the park paths and turned into the road. I wasn’t sure what to expect; and though jumping up and down curbs was a little distracting at time I still managed to overtake another VET 35 lady and a few VET men on the down stretch of the road.

My favourite bit was to come as I unexpectedly hit the trails. This was brilliant. Running along the river, it reminded me of my local area Rivelin Valley, dodging tree routes and jumping over a few stones admist the odd “excuse me please” to the dog and cat walkers in a very breathless manner.

Run hard and be nice to people. – Picture on Pinterest

Round I went, up a couple of steps which took me back a bit after bombing it around on the trails, and back along the picturesque canal. A guy on a bike then decided to have a conversation with me, “what is happening?; is this the something or other round race?” “sorry? the what” I huffed and puffed out of my oxygen starved lungs, he repeated himself and still I didn’t understand so just mumbled “Vet’s Yorkshire Relays” – should have added “excuse me gotta run”.

By this time, no on had yet passed me although I was expecting our Men’s 40 team to pass me sometime during the lap, and no sooner had I thought this that Ian our Men’s 40 lap B runner came bounding past most probably no defiantly in a less than 5.30 minute mile with such ease, yet with words of support to keep going putting me little 7 minute mile to shame. I was struggling by this time, mentally and physically, my legs wouldn’t go any faster, my heart beating harder than the sun’s rays beating down, I almost felt a little sick but determined to keep going, this was a team I was in, I would not give up, I just had to push through.

Mental will is a muscle that needs exercise, just like muscles of the body. – Lynn Jennings (running)

I could see the finish on the other side of the river again, only about 1km to go, “dig in deep”, “Go Sheffield” the marshals cheered “over the bridge” – over the bridge and onto the home straight as I saw the “finish” I took as much a sprint as I could to the line to hand over to Debs who ran our third lap.

A great route of path and park land, road, river trail, gravel lanes, and canal pathways. A fantastic variety of just over 4.75km. However I still run faster minute miles on a 10km that I do on a 5km – will someone tell me what that’s all about please?

The clubs’ Male over 50 retained their title and our team got bronze. Go us!